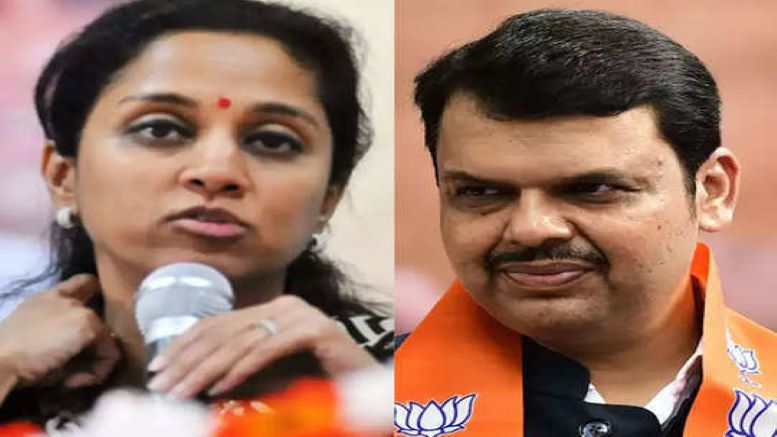 Devendra Fadnavis, LoP (Leader of Opposition) in Maharashtra, had been challenged by NCP leader Supriya Sule who asked while speaking in a function “akela Devendra kya karega? (what can a lone Fadnavis do?)” which has now come to bite back the ruling MVA (Maha Vikas Aghadi) coalition.

A few Months Ago Supriya Sule had challenged Fadnavis. She had said then:

Sharad Pawar has been in politics for 55 years spending equal time in power as well as the opposition during that period. In all these 55 years he has been close to the people. Always keep in mind that power is for service, not for position or privilege, Sule told the gathered NCP at a function in Navi Mumbai. She also used the occasion to launch a scathing attack on the Leader of the Opposition Devendra Fadnavis.

Sule had made uncharitable comments, not just about Fadnavis but also the opposition BJP in Maharashtra and BJP’s central leadership and government in Delhi. But now that same Devendra has proved himself to be the most powerful opposition leader in Maharashtra assembly by exposing many scams of this MVA Sarkar.

Fadnavis has been systematically taking on the MVA government on various issues be it inside the assembly or outside. During a press conference on March 23, former Chief Minister of Maharashtra and leader of Opposition Devendra Fadnavis alleged that Chief Minister Uddhav Thackeray chose not to act on a report exposing a racket related to the transfer of police officials which was bought to his notice. He further said that CM Thackeray decided to keep mum just to save his government.

Earlier, he had highlighted how Shiv Sena had pressurized him to reinstate tainted cop Vaze. In fact, it was LoP Fadnavis who had demanded accountability from the MVA government in the Sachin Vaze. Speaking on the floor of the Maharashtra assembly on March 9, Fadnavis cited the statement issued by Mansukh Hiren’s wife who had categorically stated in the FIR (First Information Report) that her husband had been murdered by police officer Sachin Vaze.

Even last year, as the pandemic was raging, Fadnavis had busted several false claims made by the MVA government. Hindupost had pointed out in May last year “not only has Fadnavis questioned the failure of the state government in controlling the pandemic but also put out facts and figures backing his claims. After the MVA scrambled to answer his questions and put up a weak defense, Fadnavis yet again stepped up the attack with a point-by-point rebuttal of the defense put up by MVA ministers in his second press conference in as many days”.

Proving Sule wrong, Fadnavis has led the Opposition from the front both inside and outside the Maharashtra Assembly. He has also taken the government to task for their shortfalls and ensured that MVA sarkar is held accountable. Sule may want to rethink on her “akela Devendra kya karega” comment after MVA HM Anil Deshmukh, accused in the 100 crores vasooli (extortion) case, was forced to tender his resignation today.