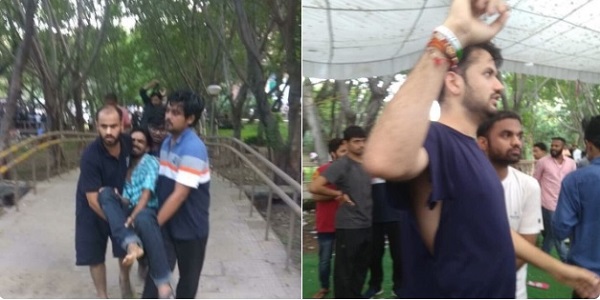 JNUSU elections have been proved a nasty, unfair and bloodied game of politics. The goons of the left parties occupied the counting venue of the JNUSU elections and were assaulting the students who objected. Both Booth capturing and ballot box capturing by the Left alliance were witnessed in the current JNUSU elections. Due to the fear of losing central panels seats to ABVP, it seemed as if the left parties had orchestrated this pre-planned drama to either do fraud in counting or to get the elections cancelled. They had their press release and propaganda ready to be published in newspapers like Indian Express etc.

While the media ran ‘neutral’ news reports about ruckus at the JNUSU election counting, but as reported from the sources, the Leftists were beating the students near counting venue. They were also beating girls from ABVP. This episode again shows the true fascist, intolerant face of the Left in Bharat.

The left-wing goons of SFI-AISA assaulted the JNU girl students just because they raised their voice against the fraudulent practices of the left-dominated Election Committee. The SFI-AISA goons brutally assaulted the JNU students who were demanding free and fair counting of the ballot papers.

The SFI-AISA even called outsiders to the JNU campus for assaulting ABVP activists. This time they were especially targeting the girls to terrorise them and to stop them from joining ABVP. The SFI-AISA goons broke the hand of a student who tried to stop them from beating ABVP girls. This is what happened that day but to cover it up, comrades spread fake news of assault by ‘masked men’ and ‘outsiders’. The student, whose arm was broken by the leftist on the counting day was attacked again at night.

Despite the victory in the elections, the leftists didn’t stop their open violence in JNU. They were dragging students from their hostel rooms and beating them. All due to the inaction of Delhi Police after the violence on 15th September.

Three students in JNU were attacked early morning by the communist party workers after left-alliance swept JNUSU Election 2018. The violence unleashed by the Left after their counting fraud continued as they tried to create an atmosphere of terror.

Some more incidents of attacks on non-Leftist students in JNU:

So in 48 hours, Leftist goons have attacked girls, differently-abled people, thrashed Dalit girls, dragged students out of hostel room and beaten them. But anti-ABVP rumours by JNU communists propagated by likes of Swara Bhaskar, Shehla Rashid etc. about ‘hundreds of outsiders’, ABVP ‘goons’ entering JNU on counting day was just to create a scene and justify open violence against students as mentioned above.

Reports of violence from #JNUSU_Election2018 #ABVP cadre is reportedly on campus with swords & laathis, ABVP cadre from DU has been brought in as well. Media and police not being allowed into JNU campus. ABVP is losing the election on ALL seats counted so far. (1)

People close to Congress were involved in instigating JNUSU violence. The second round of violence started, when the fake news of ‘hundreds of outsiders’ called by ABVP who ‘kidnapped’ a student and beat up an SFI activist outside the campus, was spread by Pradeep Narwal who appears to be a Congress activist.

Some more videos of Leftist violence in JNU:

The communists created an atmosphere of terror in the JNU campus in a pre-planned manner, after the anti-ABVP propaganda led by likes of Swara Bhaskar, Shehla Rashid, who spread the fake news to instigate and justify violence.

AISA-SFI and allies have decided to unleash campus violence after their election victory. Leftists turned violent after their victory via ballot box fraud. JNU campus has become unsafe for non-left students. They were even assaulting the faculty.

It is highly perplexing why this unchecked violence in a university located in the heart of the national capital has not caught the attention of the Delhi Police or the Union Home Minister.