Since the air strike yesterday by Indian Air Force which destroyed Pak-sponsored terror group Jaish-e-Mohammed’s main training base in Balakot, Khyber pakhtunkhwa province, Pakistan has been in denial mode regarding existence of such a centre, variously claiming that what exists in Balakot is just a madrassa (Islamic seminary) or that Indian jets missed their target and dropped bombs on barren countryside.

It seems the Pakistani Army and ISI have gotten so used to seeing their lies, two-facedness and blackmail succeed, that they have started believing their own lies about no terror camps existing on Pakistani soil.

But contrary to Pakistani self-delusion that it is still considered a respectable member of the international order, it is common knowledge in the global intelligence community that Pakistan is the hub of Islamist terror groups – some of which are explicitly used by the Pakistani Army to target its neighbours (LeT, JeM etc against Bharat, Jundallah against Iran, Taliban against Afghanistan) and others who dream of a global caliphate (Al-Qaeda etc.). Global terrorists like Hafeez Saeed, who carries a $10 million US bounty, openly strut about and publicly interact with top Pakistani officials and politicians. Almost every major terror attack carried out or foiled in the world today – 9/11, 2004 Madrid train & 2005 London bus bombing, 26/11 Mumbai attack, 2010 Times Square bombing attempt etc – has a Pakistani link.

Now, more evidence has emerged to expose Pakistan’s brazen lies about the existence of a Jaish-e-Mohammed terror camps on its soil. A 2004 US Defence Department cable leaked by Wikileaks shows how Jaish-e-Mohammed’s base in Balakot, Pakistan was a well-known hub for training terrorists even 15 years back. The memo dated 31 Jan 2004 was sent from the US Army’s Guantanamo Bay detention facility to US Southern Command. It provides an assessment of a 20-year-old Pakistani terrorist Hafez K. Rahman being held in Guantanamo, who confessed to being a member of Jaish-e-Mohammed and having received training in Balakot, Pakistan, at a location known to house a “training camp that offers both basic and advanced terrorist training on explosives and artillery.”

Other important disclosures made in the memo –

The terrorist Rahman was influenced by extremist Mullahs (religious Islamic teachers) in Pakistan and decided he would go to Jihad in support of the Taliban.

JeM is a Tier 1 terrorist organization, especially those with state support, that have demonstrated the intention and the capability to attack US persons or interests.

No prizes for guessing which ‘state support’ the cable is referring to.

It has further come to light that the terrorist training base in Balakot, Pakistan had flags of USA, UK & Israel painted on a staircase so its terrorist cadre would step on the flags and develop feelings of hatred against ‘enemy countries’. 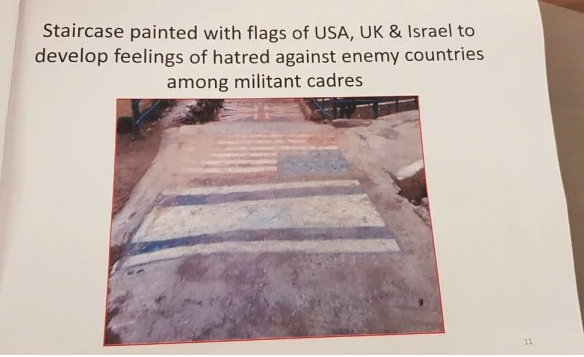 For Islamists, the three big enemies or Satanic forces are – Bharat (since it is Hindu), America & the West (Christian), and Israel (Jewish). Every jihadi organization anywhere in the world drills this hate for the ‘enemies of Islam’ into their young recruits.

This article by Christine Fair, author of ‘Fighting to the End: The Pakistan Army’s Way of War’, provides a complete background of the Pakistani terror group Jaish-e-Mohammed:

Pakistan’s Inter-Service Intelligence Directorate (ISI) created Jaish by working with several Deobandi terrorists of Harkat-ul-Mujahideen to hijack Indian Airlines flight 814 through which it managed to coerce Bharat into releasing 3 terrorists, including Masood Azhar. With ISI support, Azhar resurfaced in Karachi in January 2000 and announced the formation of the Jaish-e-Mohammed (JeM).

JeM pioneered the use of suicide attacks in Kashmir in April 2000 in Badami Bagh.

JeM split in late 2001 when its leadership disagreed on whether the organization should stay loyal to the Pakistani state under President Musharraf or begin attacking it in retaliation for Musharraf’s aiding the Americans to oust the Taliban regime, their Deobandi ideological brothers, in Afghanistan.

Although Masood Azhar remained loyal to the Pakistani state, disgruntled elements of his jihadi group launched a series of deadly suicide attacks against military targets, including Musharraf himself, under the name of Jamaat ul Furqan. This realignment of militant groups produced Tehreek-e-Taliban-e-Pakistan (TTP or Pakistani Taliban) in 2007 – or what the Pakistani Army considers ‘bad terrorists’.

Even though JeM and its leader Masood Azhar are explicitly proscribed by the United States and the United Nations Security Council, among other entities, Pakistan adamantly protects the organization. Azhar freely operates in his home town of Bahawalpur in Southern Punjab.

Since at least 2011 if not earlier, Pakistan’s ISI has been resurrecting the Jaish under Azhar’s leadership as a part of its strategy to rehabilitate those assets who defected to the Pakistani Taliban.

Pakistan’s military and intelligence agencies sought to persuade elements of the TTP to abandon the fight against Pakistan by either rejoining the fight in Afghanistan to help the Taliban or to rejoin the JeM to kill Indians. Those members of the TTP who could not be so reformed to fight the external enemies and remained committed to fighting Pakistan were deemed enemy combatants who must be eliminated.

Bharat and the United States must understand the strategic imperatives that motivate Pakistan to keep organizations like JeM in its vast stable of terrorists. Pakistan does so not merely to “disrupt peace” with Bharat; rather, to prosecute the Pakistan army’s endless war on Bharat within its borders and across South Asia.

JeM leader Masood Azhar is reported to have said in a speech in Karachi,

“Marry for jihad, give birth for jihad and earn money only for jihad till the cruelty of America and India ends.”

This is the mortal enemy we are facing, and which successive governments have kept hidden from us during the never-ending cycle of terror attack ->outrage -> calls for talks and dialogue with Pakistan. Our national security establishment has been stifled and compromised by the left-liberal Nehruvian consensus that dominates our public discourse. We lack even one influential think tank which openly bats for national interest. Clear-sighted thinkers like Brahma Chellaney have been marginalized while status quoist or compromised retired bureaucrats, diplomats, and even some ex-military personnel have ruled the roost.

It is a crying shame that basic research regarding the jihadi threat posed by Pakistani Army and ISI to Bharat has been carried out by Western analysts, but not by Bharatiyas. Or if such research has been done, those analysts have been sidelined and denied coverage by the Lutyens’ media ecosystem which thrives on the ‘peace with Pakistan’ dream.