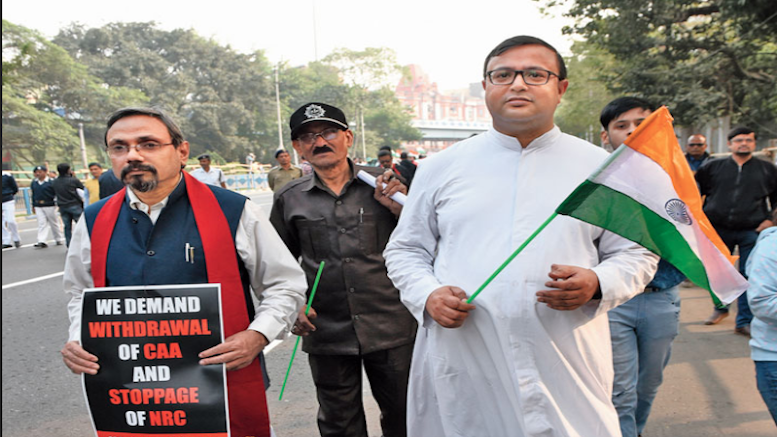 After the violent rioting in name of protests against CAA and proposed nation-wide NRC, we saw student protests in ‘woke’ humanities departments of select ‘revolutionary’ universities. Now the other half of the ‘minority’ behemoth in Bharat is flexing its muscle over CAA-NRC, albeit under the gentle cloak of preserving Constitutional values and addressing insecurity among the poor.

Principals of missionary schools and church priests on Monday took out a rally in Kolkata to register their protest against the Citizenship Amendment Act (CAA) and the the proposed nationwide National Register of Citizens (NRC), reports PTI –

“The participants walked a 1.5-km distance from St Paul’s Cathedral to the Gandhi statue in the city, holding placards that read ‘No division among people’, ‘We are all children of Jesus‘ and ‘No CAA’. They also chanted hymns in English and Bengali.

‘We only wanted to drive home the message that all are equal and we should not discriminate between religions and communities,’ said the principal of a renowned missionary school.

The Kolkata diocese of the Church of North India (CNI) also urged other protestant churches to join the rally. ‘This was the first time the CNI, Kolkata Diocese, convened such a large anti-CAA rally here. We chose two points for the march — St Paul’s Cathedral, that is part of the heritage of the city, and the statue of Mahatma, an apostle of non-violence and harmony,’ a spokesman said.

A DNA report informs us that the protest rally was taken out under the joint banner of Bangiya Christiya Pariseba and Bengal Christian Council.

“The CAA is against the very spirit of our Constitution and infringes upon the fundamental rights enshrined in the Constitution of India to its citizens irrespective of caste, creed and religion. We express our sincerest solidarity with every citizen and resident in different states of India as we are united in our diversity as one united India,” said Father Rodney Borneo, the principal of Loyola High School.

“We are noticing that some groups are giving open calls to eliminate the religious minorities and convert our democratic, sovereign and secular India into a so-called ‘Hindu state’. Minorities feel insecure by such oppressive calls by those fanatic groups,” added Borneo.

Rodney Borneo is also an official of the Roman Catholic Archdiocese of Kolkata.

A Telegraph report of the protest informs that Surojit Mondal, the principal of a missionary school in Krishnagar, had one question for the “high and mighty” who wanted to implement the CAA-NPR-NRC — how could valid voters turn into invalid citizens? “The ruling party got votes from many of those who are now losing sleep over the citizenship drive. If they were valid voters then, how can the government question their validity now?” he asked.

“From what we hear on the ground, most people are nervous. They think Muslims are being targeted now, and Christians will be next,” said Sister Grace Mary, a senior nun.

Nikhat Hassan, a Nursery teacher at La Martiniere for Girls, said the CAA was the “last straw” that had brought people from different religions together on the streets. “At one point of time, it looked as if we as citizens would withstand everything — whether it was GST or demonetisation — but after CAA and NRC we have come out together,” she said.

“The CAA and NRC need to be revoked. The government should understand that it should not hamper the secular fabric of the country with its high-handedness,” said John Rafi (extreme right), the principal of the boys’ school. The girls’ school principal, Rupkatha Sarkar (second from right), said: “I am here because I want all citizens to be represented in the citizenship act.”

Father Dominic Gomes, vicar general and chancellor of the archdiocese of Calcutta, was there to show solidarity with the poor. “If they are asked to produce their forefather’s documents, how will they do so? Anybody can be victimised in this way and nobody is secure,” he said.

All right-minded citizens should ask the following five questions of these protestors, many of whom are worryingly moulding impressionable young minds in schools –

Q1.) How is CAA impinging upon fundamental rights of any citizen of Bharat? The amended Act only grants citizenship to persecuted minority refugees from Bangladesh, Pakistan, Afghanistan who have already entered Bharat on or before 31 December, 2014. As educationists, isn’t it their duty to apprise themselves of basic facts, before hitting streets in protest?

Q2.) Do these protestors lack even basic human empathy for victims of brutal religious persecution that CAA benefits? If the protestors ask why Rohingyas, Shia, Baloch etc were not covered under CAA, inform them those people are all fighting armed insurgencies against their respective states – people from those communities who have sought refuge in Bharat will be repatriated once conditions in their countries stabilize. Rohingyas in particular have been identified as a ‘national security threat by intelligence agencies due to fears of Islamic radicalization. As a sovereign state, Bharat has every right to determine who it will grant citizenship to or not. All Western nations like USA, Israel etc have strict citizenship laws and offer preferential treatment to persecuted Christians and Jews.

The beneficiaries of CAA are poor, oppressed people who never raised even a hand in violence, yet were oppressed in an institutionalised manner by brutal Islamic states just because they were non-Muslims. They, especially the Dalit Hindu refugees, have nowhere else to go but Bharat. Does their suffering mean nothing for these anti-CAA protestors.

Q3.) Who has made calls to ‘eliminate’ religious minorities? Why are these people LYING so brazenly? Do they want to create a civil-war like situation through such scare-mongering?

Q4.) Why are they spreading rumours about what kinds of documents will be required in the proposed nation-wide NRC? Producing forefather’s documents to show residency before 25 March 1971 was a unique requirement of the Supreme Court monitored NRC recently conducted in Assam due to conditions imposed by Assam Accord. Why will this condition be relevant to nationwide NRC? When nothing has been announced regarding NRC documentation, why are such ‘educationists’ spreading rumours?

Illegal immigrants tend to gravitate towards crime because of the anonymity their undocumented status affords them. Case after case in metros across Bharat have shown the hand of illegal Bangladeshis in crime. It was an illegal Bangladeshi immigrant, Nazrul Islam, who was responsible for the horrific rape of a a 71-year-old nun at a Ranaghat convent in WB – a crime which the entire secular-Church ecosystem had prematurely blamed on ‘Hindu radicals’.

Yes, implementing NRC will not be a cakewalk, but doesn’t a State have a responsibility to guard its borders and deport illegals? CAA and NRC are already showing a deterrent effect on our borders. Don’t anti-CAA protestors want a safer Bharat?

It is hard to escape the conclusion that the stand of the Church, despite knowing full well that CAA benefits persecuted Christians as well, is a cynical ploy driven solely by their intense dislike for the fact that Bharat is finally formally recognising its duty towards persecuted Hindus in its neighborhood. It is this Hindu awakening that threatens the Church and makes them resort to such brazen propaganda. The Church also knows that powerful Western Judeo-Christian nations are anyway providing refuge to persecuted Christians or fighting on their behalf, so it dismisses this offer of citizenship to persecuted Christians by Bharat’s government with contempt.

At the same time, it is a telling comment on the sorry state of Hindu religious bodies and institutions that apart from RSS, BJP and a few other organisations, none have come forward in support of CAA. The charade of secularism that prevailed in this country for 70 years has been blown to shreds by the open politicisation of this CAA-NRC issue by Muslim & Christian religious bodies. If Hindu mathas, temple associations, and sampradayas do not speak up now for an act that benefits poor, oppressed Hindus the most, then their role towards Dharma and society comes into question.