Kerala Floods: When the Comrades Shed their Clothes 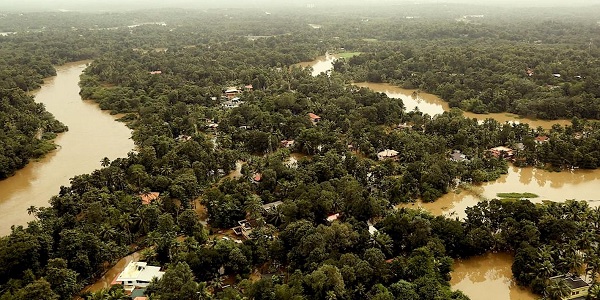 Nothing excites our Red-drenched comrades, now masquerading as liberals, as much as large-scale suffering. Larger the scale, greater are the swirls of the romantic and dreamy ideological mists that sway like diaphanous, tantalising curtains before their eyes.

Their excitement is almost sexual, a heady tumescence anticipating a bloody revolutionary release.

And then there’s this copy-paste piece from a failed Harvard economist plugged by the founder and editor of yet another dangerous, Far Left propaganda website.

So why did the Kerala floods trigger these seemingly-coordinated tweets reviving the aforementioned 2016 vile propaganda piece? And what necessitated said failed Harvard economist to photocopy that piece? An educated guess maybe hazarded. For one, Kerala is the last Communist bastion, which under the violent rule of “Bengal Model” Pinarayi Vijayan, is perhaps on its last legs. Of course, the comrades mentioned above are willfully blind to how the selfsame Pinarayi Vijayan dipped his stained hands into the State Disaster Response Fund (SDRF) to book a private helicopter for himself even as his citizens were dying by the hundreds.

The other side of the coin shows how there’s every reason to believe that our comrades are getting increasingly constipated at the prodigious growth of the BJP in Kerala. In fact, it appears that the Communist-sponsored genocide of BJP and RSS members in the state has only added to the party’s growth.

And then Prime Minister Narendra Modi visited Kerala to take stock of the flood situation barely hours after walking four kilometres paying his last respects to the recently departed former Prime Minister Atal Bihari Vajpayee. This move was widely hailed as characteristic of the Prime Minister’s round-the-clock work and his rooted concern for Bharatiyas irrespective of political and other affiliations.

Which is also what brought our comrades tumbling out of the woodwork. Think about it: when was the last time you ever saw the likes of Ramachandra Guha, Siddharth Varadarajan, M.K. Venu, and Shekhar Gupta go out on the field in times of such disasters? On the contrary — and this is why I said, our comrades just love large-scale suffering — they miss no opportunity to sickeningly politicise such suffering. Aside: this piece excellently documents the precise nature of their politicisation.

History is always a reliable guide, which is why one of the first things that our comrades did after getting Indira Gandhi’s patronage was to take control of its writing and dissemination.

Let’s begin with the same July 2106 propaganda piece published in the latest digital avatar of divisive Dravidianism-cum-Far Left ideology. In a rare display of honesty alien to the Left, its headline leaves no room for doubt: United States of South India: Can a southern collective get us a better deal from Delhi?

Taking a cue from this, Shekhar Gupta tweeted thus:

Today, India is spoken of as a single whole. But there can scarcely be any doubt that, in the event of a revolutionary upheaval in India, scores of hitherto unknown nationalities, having their own separate languages and separate cultures, will appear on the scene.

That was Josef Stalin in a speech addressed to a “Meeting of Students of the Communist University of the Toilers of the East.” The date: 18 May 1925. The full transcript was published in Pravda, №115, May 22, 1925.

True to form, Gangadhar Adhikari, one of Stalin’s Bharatiya Communist slaves took the hint. In 1942, he authored the notorious “thesis,” titled Pakistan and National Unity. Ten Annas was the price of this pamphlet which advocated not just the Partition but the splintering of Bharat. Going by this mountainous and well-documented record, don’t be surprised if Adhikari’s modern-day inheritors put today’s 10 Anna-equivalent as the price for selling Bharat.

The Communist Party draws together the toilers of all castes, communities and nationalities in common class organisations…It unites them politically…For this purpose, the basic rights of the…nationalities must be made an essential part of the programme of the united national front [UNF]. The programme of the UNF must…recognise the following rights…

(a) Every section of the Indian people which has a contiguous territory as its homeland, common historical tradition, common language, culture…and common economic life would be recognised as a distinct nationality with the right to exist as an autonomous state within the free Indian union or federation and will have the right to secede from it if it may so desire…Thus free India of tomorrow would be a federation…of autonomous states of the various nationalities such as the Pathans, Western Punjabis (dominantly, Muslims), Sikhs, Sindhis, Hindusthanis, Rajasthanis, Gujeratis, Bengalis, Assamese, Beharis, Oriyas, Andhras, Tamils, Karnatakis, Maharashtrians, Keralas, etc. [G. Adhikari: Pakistan and National Unity: People’s Publishing House, Bombay, 1942]

That should put Shekhar Gupta’s “federation” balloon in proper historical perspective. And like Adhikari, Shekhar Gupta too, is thoroughly unoriginal.

Back then, the Communists had four distinct advantages for openly advocating secession:

Shorn of all these advantages, the best they can come up with today is a “United States of South India.” For all claims to the contrary, the News Minute “article” contains several dead giveaways:

What then is the solution when democratically rendered justifications, pleas, complaints, negotiations and bargains have failed to strike a chord for decades? Secession? No. [Emphasis in the original]

The argument is thus in favour of strong regional governments…

The Southern collective must happen and extract its pound of flesh. Yes, it will take a mammoth effort of statesmanship, a steely resolve to the south Indian cause, and above all the pragmatism of politics from all five states to conceive and devise such a beast, but it is not beyond the pale… After all, the redoubtable leaders have already given the nod. [Emphasis added]

Apart from the breathtaking callousness with which Tara Krishnaswamy — author of that propagandist piece — throws around words like “atavistic politics,” it is sheer hypocrisy and separatism that reeks through. Indeed, the brand of ideological and political narrative that she espouses is precisely that which actually led to the said “atavistic politics (sic).”

It is the same narrative that actually celebrates convicted criminals like Lalu Yadav, or Mayawati or Mulayam Singh Yadav (remember his cruel excuse justifying rapists?), and remains mum even as Mamata Banerjee’s Islamisation of West Bengal has razed the state. It is the same narrative that refuses to acknowledge the fact that Madhya Pradesh, Rajasthan and to an extent, Bihar have shed the infamous BIMARU tag years ago.

Or, more generally, the fact that the entire North Bharat is today under the BJP rule is what is precisely at the root of Tara Krishnaswamy’s hot-air balloon called “United States of South India.”

Equally, the “development politics” of the South is blatantly untrue. Why for example, has the decades-long, colossal loot of public money under successive DMK and AIADMK governments been completely overlooked? Or the fundamental reason for mass Malayali migration for nearly five decades? Or the fact that minus Gulf remittances, Kerala would have become another Lalu-ruled Bihar? Or the fact that economic development in Karnataka — its emergence as the IT and knowledge hug — occurred despite successive Governments and not because of them. Or the real reason for the Telangana separatism. Or why large swathes of the (split) Andhra Pradesh are still reeling under shocking backwardness.

For the sake of argument, let’s assume that Tara Krishnaswamy’s delirious dream of a “United States of South India” headed by a leader with a “steely resolve” comes true. What would she advocate when murmurs of discontent within this “southern collective” erupt into a cacophony of revolt? Would she then advocate for a “Separate United States of South India?” Who would the leaders of these separate “united” states appeal to? The same central Government? What if the central government refuses to accede this time around? This race to the bottom will end where it eventually must: civil war and a splintered Bharat.

But the biggest giveaway of Tara Krishnaswamy’s propaganda is this: “After all, the redoubtable leaders have already given the nod.”

When this propaganda was published, all South Bharatiya states were ruled by non-BJP parties, its leaders terrified of the BJP election-winning machine which in 2018 decimated both the Congress and the Janata Dal (Secular) in Karnataka. To cut a long story short, this propaganda pamphlet is simply a desperate call for putting up a united front to stop the BJP: even if it means calling for secession, civil war thereby undoing all the hard work of stalwarts like Sardar Patel.

To be sure, this toxic propaganda was picked up by the selfsame South Bharatiya political leaders almost immediately.

On the one hand, we had a highly unstable Pawan Kalyan almost echoing Tara Krishnaswamy’s line and broadcast no doubt by the selfsame The News Minute and by the Extreme Left propaganda rag, The Wire. And then, following the exit of the political opportunist extraordinaire, Chandrababu Naidu from the NDA, the narrative in Andhra Pradesh has been: Andhra versus Delhi. Former Karnataka Chief Minister Siddaramaiah too pumped his own share of hot air into this divisive balloon.

Let it be said that Tara Krishnaswamy’s poisonous propaganda is simply the prose version of naked separatists like Kanhaiya Kumar and Umar Khalid.

If a call for strong regional governments is the seeming concern of this sort of narrative, why not look at say, Gujarat, Madhya Pradesh, Chhattisgarh, or even Uttarakhand? At any rate, no regional government can and should come at the expense of Bharat’s sovereign integrity. And at the moment, it is only the BJP that cares for this integrity.

Which is why I always encourage the Red-drenched comrades to carry on their propaganda. The more they write and peddle and holler, the more their nakedness they themselves reveal.

This article first appeared on medium and has been presented here with author’s consent.