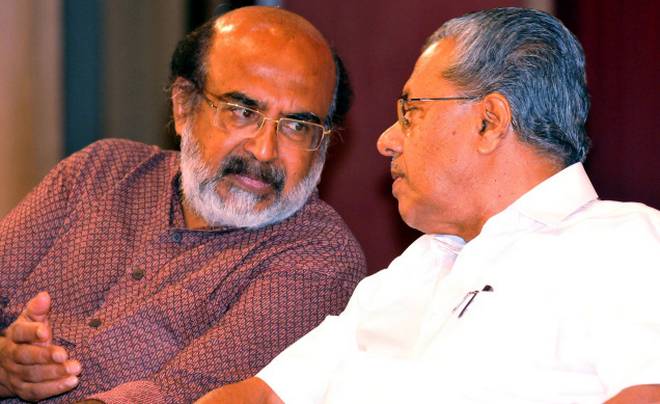 At a time when practising Hindus of Kerala are waging a grim struggle to uphold their religious rights and prevent the sacred Sabarimala tradition from being violated, Kerala Finance Minister and senior CPM MLA Thomas Issac has stoked a new controversy by apparently labelling the protesting Sri Ayyappa devotees as ‘real terrorists’. The ongoing protests at Nilakkal, base camp for the trek to the Sabarimala hill shrine, saw a brutal police crackdown yesterday which left several devotees seriously injured. One elderly Guruswami (someone who has undertaken pilgrimage to Sabarimala not less than seven consecutive years in the traditional long route) committed suicide.

Devotees also stopped women activists who were trying to enter the temple – several of these activists have been proven to be communists, radical atheists or publicity-seekers, for whom devotion to Sri Ayyappa is the last thing on their mind.

Media channels, which were conspicuous by their absence in the last 10 days when lakhs of ordinary women devotees peacefully poured out on the streets of Kerala and other parts of the country for the #SaveSabarimala campaign, descended on Nilakkal yesterday to cover the spectacle as the Kerala Government flat out refused to listen to Ayyappa devotees and decided to implement the Supreme Court order by force.

It appears that several channels deliberately sent women journalists, despite knowing full well that ordinary devotees were protesting against this very thing, i.e. the entry of women in the 10-50 age group. When devotees pleaded with the women reporters to turn back, they refused – in desperation, people blocked their vehicles and some got aggressive.

Almost all English-language media outlets – Republic, NDTV etc – went ballistic on this issue and have been outraging since yesterday about the ‘attack on media’. None of the front page news today has covered the police brutality or the fact that ordinary devotees have suffered serious injuries.

It is this context that Thomas Issac, who also happens to be central committee member of the Communist Party of India (Marxist), seems to be taking a dig at Republic TV, in his tweet. In recent times, a few channels like Republic, Times Now have covered the extensive Islamist terror network set up in Kerala (especially Malappuram district), by groups like PFI which is being investigated by NIA for terror links and organized Love Jihad, i.e. the entrapment of non-Muslim girls for conversion, marriage and export to terror hubs in Syria etc.

Dozens of Kerala youth have left the state in recent years to join the terror group IS (Islamic State) – and even the Kerala police acknowledged the depth of the problem when they launched a drive to de-radicalize 350 youths and their families last year.

But even this limited media coverage of a serious national security issue which was like an open secret for the last 15 years, has upset the CPM party which considers Kerala as its last bastion.

The Communist minister’s tweet is indeed unfortunate because he seems to be implying that the Islamist radicalization problem that Kerala is grappling with is imaginary, while the ‘real terrorists’ are the Ayyappa devotees who got agitated when some women journalists tried to enter the Sabarimala shrine.

If this is the mindset of a senior member of the Kerala cabinet, then it is deeply troubling for the people of Kerala and the rest of the country.