Kashmiriyat Is Alive And Well I have great news for all secularists. Yes it is!!!  Here is the latest evidence that this Kashmiriyat is still alive and growing up very nicely, thank you.

Here is the evidence.  This is from reports after the surviving yatris returned to Gujarat, and appeared yesterday in Dainik Bhaskar (Surat edition).  One can obtain the paper from http://epaper.bhaskar.com/surat-city-hindi/488/12072017/mpcg/1/ 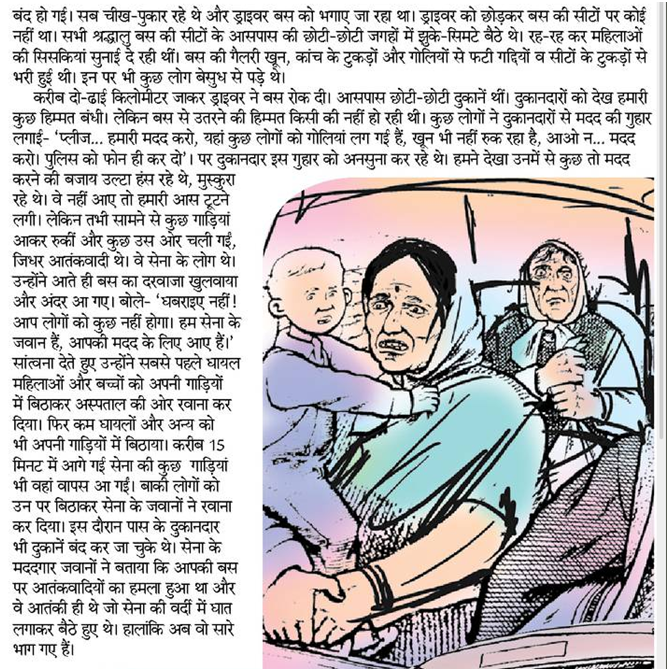 Let me translate the line starting from 5th from top.

“Roughly 2 – 2.5 Kms ahead [of the terrorist attack at Batengoo], the driver stopped the bus.  Around us were small shops.  When we saw the shopkeepers, we felt a little better, some strength returned to us.  However, none of us had the courage to get out of the bus.  Some people called out to the shopkeepers:

“Please,… help us.  There are some people here who have been shot.  Their blood does not stop flowing.  Please come … help us.  Please call the police.”

However, the shopkeepers were ignoring our pleas.  We saw that some of them were laughing, smiling, instead of helping.  Seeing this, we lost hope.  However, after that, some army vehicles came (and helped them….)

So, as we can see Mr. Rajnath Singh, your beloved Kashmiriyat has not died.  It is alive and well.  Now please leave us alone to grieve, since you have not lost your loved Kashmiriyat, but we have indeed lost our loved Yatris.  Let us grieve.