Kashmir Back to Square One 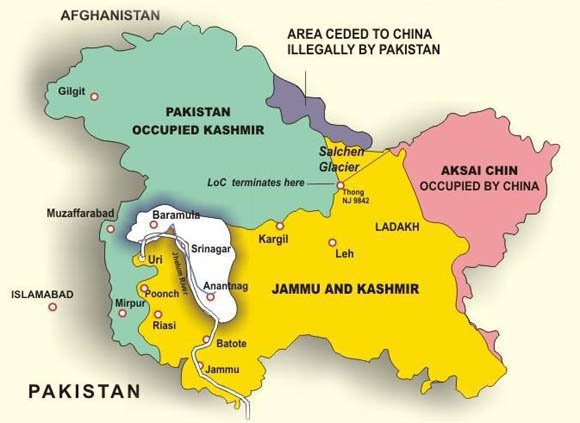 For more than a year now Pakistan’s credibility with the Americans is on its downward slide. Even the buddies of Pakistani Generals at the Pentagon have begun to look away. The annual report of Pentagon to the Congress is a scathing criticism of Pakistan’s double-speak on terrorism with specific reference to Haqqani group getting sanctuaries in Pakistan.

US Congress convened a meeting of its law makers to reflect on Pakistan’s double speak on the Taliban-Al Qaeda combine. Congressman Poe told the lawmakers to put a simple question to Islamabad “Are you our friend or foe?” F-16 deal ended in fiasco. 300 million US dollar military package has gone to cold store.

PM Modi’s deft handling of Littoral States has given sleepless nights to GHQ. In particular, Modi’s popularity with Saudi monarchy is galling for it. In Modi’s deliberations with the heads of these States, Kashmir question did not figure even remotely. The message to Pakistan was that henceforth the annual ritual of initiating anti-Bharat resolution in OIC meets would be the subtlest joke of the year.

GHQ’s mortification is that it is gradually but definitely losing its position as the ultimate source of power and arbiter of the destiny of Pakistan. Unwilling to swallow the bitter pill, GHQ is weighing the pros and cons of options for retrieval of its prestige and power.  In opting for the trump card, the hesitation is that while the US is impervious, China would be caught on the horns of dilemma. Additionally, the home-grown “non-state actors” will find time ripe for insisting on their pound of flesh.

Nevertheless, GHQ is not going to enter its shell that easy. It will put at stake everything to rehabilitate itself as the final source of power to be reckoned with.

It has evolved a two-pronged strategy. One is to maintain pressure on Islamabad regime to a limit just short of dismissal via bloodless coup. Second is to use the traditional safety valve viz. Kashmir issue to divert public attention away from the impending crisis.  The motivating factor for this part of ISI’s strategy is its experience with the euphoric response it expects from Kashmir Valley people with traditional make-believe mindset.

As regards part one of the double pronged strategy stated above, the Dawn of 12 July reported that suddenly millions of posters appeared one fine morning in almost all prominent cities of Pakistan supplicating the chief of military brass with the prayer: “ab to khuda ke lie ajao” (now please step in for God’s sake) with General Raheel’s picture splashed on the top right corner of the poster.

Analysts say it is the handiwork of ISI. The message to the ordinary people in general and to the elected government in particular in Pakistan is loud and clear: Be prepared for the eventual. Selig Harrison of Carnegie Institute thinks Pakistan is on the brink of disintegration.

As for the second part of the strategy, well what we see happening in Kashmir since July 8 is precisely the culmination of what was in the calculus of GHQ from this spring onwards.

Immediately after the news of Burhan Wani’s killing in Kashmir was known, Jamaat-ud-Dawa (and LeT) chief Hafiz Saeed and the chief of United Jihad Council Salahuddin came together in Muzaffarabad to be briefed by the ISI for strategy in Kashmir. Kashmir Jamaat-i-Islami cadres were activated, obviously through the instrumentality of money and motivation.  Burhan’s killing was to be made the rallying point.

Both factions of Hurriyat, JKLF chief, and all other separatist groups and secessionist leaders, usually entangled in one-upmanship game, issued appeals for strikes, protest rallies and resultant clashes with police and paramilitary forces.

Rapid increase in infiltration bids, sporadic attacks on security forces or some of their installations, hatred towards everything Bharatiya, profiling Kashmiris as the eternally victimized people, deepening alienation through trumpeting discrimination etc. are the tools for whipping up passions among the people, to which Jamaatis resorted to on external prompting.

ISI whipped up histrionics among the population in the valley and rushed to the UN Security Council to cry wolf about Kashmir unrest. Sections of Bharatiya media, proudly competitive of their slanderous and treasonable journalism, gave it media hype but meticulously avoided even the slightest hint of the caprice-ridden Kashmiri mind, a trait which Bharat failed to comprehend and Pakistan exploited to the hilt.

It said two lakh people attended the funeral of Burhan. Stress was on the big figure to impress that Burhan was a hero of Kashmiris. Partisan scribes carefully avoided saying that this was the largest crowd assembled at the burial of a Kashmiri ‘hero’ after that of Sheikh Abdullah in 1984. We know why they held back the comparison. They feared of being asked the hateful question like who guards the grave of the Sheikh and why.

Apart from them, valley based cadres of NC and Congress came out beating their breast that police over–reacted to people’ protest rallies. Partisan media gleefully concocted stories like “extra-judicial” killing of Burhan. Omar Abdullah, the ex-CM feigned innocence about terrorist antecedents of Burhan Wani.

However, Azad, the Congress opposition leader in Rajya Sabha was objective in his comment on the incident; evidently more for nailing down his professional rivals in the party (Soz & Co) than for any love of principled politics.

There are more than a dozen criminal charges against the slain HuM commander in the records of J&K Police. Leading his terrorist group, he had ambushed a J&K Police party and gunned down three policemen. J&K Police vowed to take revenge. They kept a track, and redeemed their pledge. No Hurriyati or separatist leader condemned the killing of three co-religionist policemen by Burhan nor did they give a call for hartal.

The Hurriyatis, the separatists, the “pro-aazaadi” groups and others of their ilk act as per directions of their external handlers conveyed to them through established channels.

The latest instructions from ISI to local cronies are to instigate masses of people for attacks and gheraos of army camps, installations and CRPF and police posts. Bandipore and Qazigund events are a proof. The purpose is that the forces will retaliate, casualties will happen and these will serve fuel to fire.

They fueled the fire of Kashmir disturbance, not for the love of Pakistan but for the love of enslaving themselves to a military State. Kashmir valley today is a crude and superfluous imitation of Saudi religious profile. For the time being, as long as Kashmir leadership of all hues is able to extract money from Bharat and guns from Pakistan, the people need not worry which side of their toast is buttered.

Ever since the upsurge took place on 8 July, enormous funds are pouring into the valley from both sides. Amusingly, the intelligence establishment from both sides is apportioning to itself lion’s share of the largesse.

Unfortunately, Kashmir Valley is bankrupt of astute and visionary leadership. More unfortunately, its people are not able to divest themselves of the damaging trait of capriciousness. The hanging of Zulfikar Bhutto in Pakistan saw annihilation of Jamaat-i-Islami in Kashmir. Today, the same organization rules the roost in the beleaguered valley.

There is nothing surprising about valley mobs intimidating the few hundred beleaguered Kashmiri Hindus (Pandits) who were given petty employment as teachers or clerks in the valley. Actually out of six thousand jobs announced for the displaced Kashmiri Hindus in ex-PM’s package of 2008, only 1400 jobs were provided after six years of hassle with the bureaucrats and officialdom. Setting aside the normal rules as stipulated in the State Service Rules, new and arbitrary rules were framed exclusively for the Hindu recruits, which reminds one of the age of serfdom and slavery. Reports of unruly mobs pelting stones on the camps of these Hindu families have come from various places like Hal, Mattan, Nutnusa and some more places forcing these few families to leave Kashmir. Entire Hindu families from District Kupwara have vacated and reports of their departure from other camps have also come in. Though on individual and personal level, these Hindu families have been treated fairly but when unruly mobs take law into their hands, things become intolerable for the fear-stricken community. No Hurriyati leader has appealed the crowds not to intimidate the helpless few hundred Hindus who had come to earn their bread.

However, the violent mobocracy has given rise to the crucial question: Can displaced Kashmiri Hindus ever return to the valley?

The coalition J&K government stands beleaguered. MLAs meticulously avoid interacting with the masses of people in their respective constituencies. It is not that they are not confident of their popularity. They are creating an impression of how dismally serious and almost irretrievable the situation is.

Is Mehbooba Mufti on secure ground? That is a baffling question.  PDP is the so-called acceptable face of militancy. She has to reckon with hardliners within her party and Council of Ministers. Her eleven minute peace appeal from a live TV channel reflected only pathos and no statesmanship.