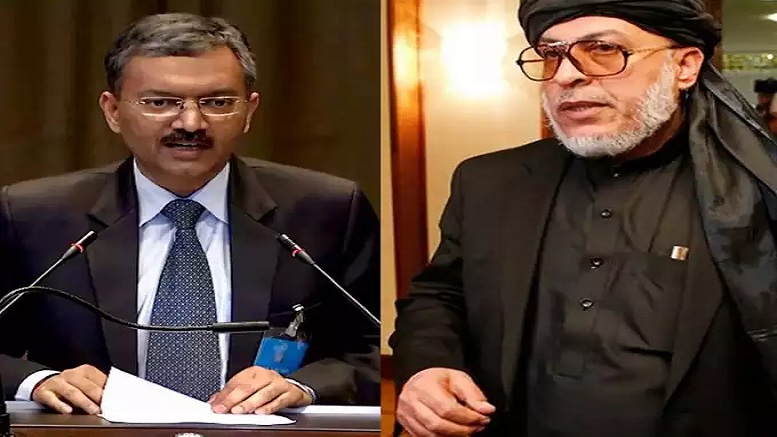 The geopolitical earthquake in Afghanistan (Af) has clearly caught our foreign policy honchos napping, and that includes the PMO. Not since the 1962 Chinese betrayal have the inmates of South Block been so utterly and completely flummoxed.

There are, however, key differences in the situation then and now. ‘62 was a foreign policy and military disaster in which Bharat was directly at the receiving end. Behind it was the pusillanimity of one man: J Nehru. His obdurate refusal to untrust Beijing invited the catastrophe.

Declassified CIA documents confirm that the Chinese diplomatic onslaught spread over five-years was a superbly executed act of treachery by Zhou Enlai, the first premier of the People’s Republic of China.

Zhou, it was suggested, fed Nehru’s desire to be seen as an anti-imperialist icon and peacemaker, especially vis-à-vis the Dragon. Not that our Harrow educated brown sahib had the slightest desire to imbibe the true spirit of peacemaking, which involves give and take. The peacemaker in Nehru was essentially an insecure, lily-livered seeker of stature and glory.

The kaboom in Kabul has more dangerous implications for Bharat. This, despite having kept a scrupulous distance from the country’s internal politics. With the Taliban back in power, the $3 billion sunk in developing the country’s infrastructure now seems a labor in vain, and the goodwill earned in over a decade lost in a nonce.

Sizeable investments have been made in long-term development projects like building roads and highways, electricity transmission lines, setting up schools and scholarship programs etc.

The new Afghan Parliament House was inaugurated by Narendra Modi six years ago at a cost of $90 million. The 19th century palace of Afghan King Amanullah Khan was renovated a year later. The Salma dam project in Herat was a major infrastructural initiative. It was aimed at providing irrigation water to surrounding districts spread over thousands of hectares.

A more far-sighted FP establishment might have foreseen that given Afghanistan’s endemic political instability and terror ridden past, a relapse into bloodshed and anarchy was always on the cards. And that American protection for a succession of corrupt regimes post 9/11 was never permanent. Withdrawal of U.S. troops was only a question of time.

Only the strategic imperative of keeping the evil ISI-jihadi network at bay compelled New Delhi to stay invested in Afghanistan.

Not even the gruesome 7 July 2008 attack on the Indian embassy in which 40 people were killed impelled the government to scale down its activities. A number of consulates were the target of repeated grenade attacks in earlier years.

Twenty-five people were done to death by a lone gunman of the IS-Haqqani network inside the Gurudwara Har Rai Sahab in Kabul as recently as 25 March 2020. This too did not shake our resolve to stabilize Afghanistan’s nascent democracy.

Admittedly, what could not have been envisaged was the scuttled pull-out at the insistence of one of the most blundering presidents in U.S. history.

Truth to tell the Modi regime’s policy of prioritizing neighbourly relations above other countries seems eminently sensible on paper. But it has failed to deliver the expected diplomatic dividend.

Barring Bhutan, the loyalty of none can be taken for granted. Islamists are a potent force in Bangladesh despite the secular credentials of the Sheikh Hasina regime. And Nepal and Sri Lanka are no longer the allies of old partly due to the growing influence of China.

Given Pakistan’s role in birthing and rearing the Taliban monster and the history of jihadi attacks on Bharat’s assets in Af, it is unfortunate that New Delhi allowed its ambassador in Qatar, Deepak Mittal, to readily meet the head of the Taliban’s political office, S. M. A. (Sheru) Stanekzai, in Doha on August 31, and that too at the Indian embassy.

And if it is true that back-channel parleys with the terrorists have been on for the last several months, we may already have played into the hands of the Taliban whose immediate interest is getting the backing if not the formal recognition of a few key countries with an economic stake in Af.

Sheru is reported to have persuaded the Bharatiya envoy to request the government to continue the development and humanitarian work prior to Taliban’s takeover.

With the entire embassy staff back home, Mittal was assured full security on resumption of work at our consulates in Kandahar, Herat, and Mazar-e-Sharif. How much weight his guarantee carries within the various factions of the Taliban is open to question.

The Leftist-Islamist cabal has been making strenuous efforts to daub the Taliban with a fresh coat of paint. Mercifully, not many are ready to accept the hokum that Taliban 2.0 is a rebooted, reformed version of the killer Sunni sect which wrought mayhem during its earlier stint in power between 1996-2001.

Laughable attempts have been made in the past by Pakistan to draw a distinction between good and bad Taliban. The new stratagem is to convince the world that the Taliban have morphed into a trusted entity. And that the real enemies inhabit the IS-Khorasan State, the Haqqani network, and Al-Qaeda.

That Al-Qaeda’s top leadership (its supreme leader Al Ayman Zawahiri included) has been living somewhere close to the shadowy Af-Pak border under the overall protection of the Taliban is common knowledge. It is the only place he could have survived after Osama Bin Laden was rubbed out by the U.S. Navy Seals in May 2011.

This gives the lie to the Taliban brag of having disengaged with the Al-Qaeda. Nothing jihadis say can be taken at face value. In the end they are all together. Their differences are peripheral because their objective is common: establishing an emirate through jihad.

The utter banality of the contention is also evident from the open contradictions within the jihadi network. While a section of the Taliban engages in diplomatic capers in Doha, the reawakened Al-Qaeda throws the gauntlet at the West.

Exultant at the abject U.S. surrender in Af, it called upon the global Muslim community to “free” other Muslim majority lands in the occupation of non-Islamic powers. Kashmir, it said, was next on the jihadi hit-list. Conveniently missing, however, were the names of Chechnya and Xinjiang where minority Muslim communities face severe repression.

Much like the Al-Qaeda, its benefactor-in-chief, Pakistan also had the nerve to warn the U.S.: a report in the top British newspaper, The Sunday Times, titled “Work with the Taliban or repeat the horror of the 1990s” said Pakistan’s National Security Adviser Moeed Yusuf had told its correspondent, Christina Lamb, on 28 August, that the West risked a 9/11 encore in case it refused to engage with the Taliban.

Realizing the blunder, the NSA tried forcing a retraction of the interview, but the paper refused to oblige since the utterance had been recorded.

The mandarins at South Block would do well to recall that the Taliban have since 2002 been vociferously demanding the departure of Indians involved in development. Threats were issued to ensure compliance and followed by abductions, beheadings, and suicide attacks. The south-west province of Nimroz saw three separate attacks on Bharatiya personnel in 2008.

The brunt was borne by the personnel of Indo-Tibetan Border Police (ITBP) personnel posted at the Bharatiya embassy in Kabul along with personnel of the Border Roads Organisation (BRO). Nearly 30 rockets were fired on the latter’s personnel engaged in building the 124-mile stretch of the road across Nimroz.

What then are our options? “Wait and watch” is the general counsel handed out by experienced diplomats with their heads firmly on their shoulders.

Unfortunately, there is nothing much to wait or watch. The Taliban are essentially a bunch of brutal blockheads whose brains have been snaffled by the ISI. Which is why guarantees handed out by even their senior most mullahs and commanders have little or no worth. Other rogue outfits like IS-K can always be commissioned to do the dirty work. Since all are funded by the ISI, they all have a stake in keeping it happy.

The list of terror bodies who use Af as their operational base is endless. The Al-Qaeda and IS-K apart, there is the East Turkestan Islamic Movement (ETIM) which fights for the supressed Uighurs in Xinjiang, the Islamic Movement for Uzbekistan and its breakaway, the Khatiba Imam al-Bukhari.

More familiar are the jihadi outfits of Pakistani vintage like the Tehreek-e-Taliban, LeT, JeM, Jamaat-ul-Ahraar, Lashkar-e-Islam and Lashkar-e-Jhangvi. Each has close links with Taliban fighters on the ground and are frequently at each other’s throats if things don’t go their way.

What’s more clerics like Abdul Ghani Baradar, the Taliban co-founder, and the commanders doing the actual fighting are not always on the same page. Baradar, who will be heading the new Taliban government, has no love lost for the ISI. He was in the latter’s custody for two years in 2010 as punishment for being in direct touch with the then Afghan President Hamid Karzai.

Right in front is the Quetta shura headed by Mullah Haibatullah Akhundzada. He was appointed the Supreme leader of the Taliban in 2016.

Recognizing the Taliban thus serves no purpose till it manages to extract itself from the clutches of the ISI. Minimal engagement thus remains the only option with the stress on trade and development and people-to-people contact.

Not till the terrorist turned rulers have proved their sincerity in playing by the rules of the civilized world can the relationship be formalized.

More importantly, the American flight from Afghanistan holds a key lesson for the country: no ally can be fully trusted.