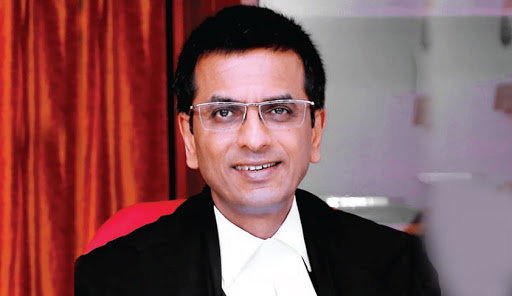 A string of judgements by Supreme Court Judge DY Chandrachud in the last week have firmly established him as the cynosure of all eyes in Lutyens’ Delhi.

“True liberal”, “hero”, “new cool”, “Judge of our times”, “red-hot & fierce”, “upholder of constitutional morality”, “foremost counter majoritarian” – these were some of the epithets handed out related to the judge and his verdicts. There was even a call to nominate J. Chandrachud for the Nobel Prize! And many were already looking forward with glee to his potential 2-year term as Chief Justice of India beginning in November 2022. As per Justice DY Chandrachud’s Wikipedia page, his father Y. V. Chandrachud was the longest serving Chief Justice of India and mother Prabha was a classical musician. After attending Cathedral and John Connon School, Mumbai and St. Columba’s School, Delhi, Chandrachud graduated with honours in Economics and Mathematics from St. Stephen’s College, New Delhi in 1979. He obtained his LL.B. degree from Delhi University in 1982 and an LL.M. degree from Harvard University on the prestigious Inlaks Scholarship in 1983. He also did his Doctorate of Juridical Sciences (S.J.D.), from Harvard University in 1986. His thesis was on Affirmative Action and considered the law in a comparative framework.

Some of Chandrachud’s prominent judgments are in the areas of constitutional law and the protection of human rights. He has authored several articles on human rights and been a speaker at conferences organised by bodies like United Nations High Commission on Human Rights, International Labour Organisation, United Nations Environmental Program, the World Bank and Asian Development Bank.

So what exactly has made Lutyens’ Delhi shower such affection on J. Chandrachud? Here’s a quick glance at the key points he has made in his recent judgements that have brought such cheer to Lutyens’ left-liberals –

Justice Chandrachud was part of the 4:1 majority that overturned the centuries-old tradition of menstruating age women not entering Sabarimala temple in deference to the temple deity Sri Ayyappa who is manifested as a Naisthika Brahmachari (lifelong celibate)in that particular temple alone. He said –

“Religion cannot be cover to deny women right to worship. To treat women as children of lesser God is to blink at Constitutional morality”

“Physiological features cannot be a ground for denial of rights. To suggest that women cannot keep Vratam is to stigmatize them”

“Religion cannot be used as cover to deny rights of worship to women and it is also against human dignity.”

“Prohibition on women is due to non-religious reasons and it is a grim shadow of discrimination going on for centuries.”

“A deity in a temple does not have any constitutional rights…Fundamental rights are meant for individuals not deities or idols.”

Justice Chandrachud dissented from the majority (2:1) to hold that the arrests were without any basis and politically motivated. He said –

“The Maharashtra police was biased and cannot be trusted.”

“A court monitored investigation by SIT was necessary.”

“Court has to be vigilant to ensure the liberty of those who take up unpopular causes. Voices of opposition cannot be muzzled because it is a dissent….dissent is symbol of a vibrant democracy.”, .

Justice Chandrachud sharply dissented from the majority (4:1) which upheld the constitutional validity of Aadhaar. He said –

“Aadhaar must not be allowed to obliterate constitutional identity”

“The entire Aadhaar programme, since 2009, suffers from constitutional infirmities and violations of fundamental rights”

“Constitutional guarantees cannot be subject to the vicissitudes of technology”

“Assumption that every individual who opens a bank account is a potential terrorist or a  launderer is draconian”.

“Allowing private players to use Aadhaar will lead to profiling, which could be used to ascertain the political views of citizens”

“A digital nation must not be submerged with digitalised citizens”

Even as part of the unanimous 5-judge SC bench which struck down the colonial era adultery law (IPC 497), Justice Chandrachud made interesting observations:

“A woman loses her voice, autonomy after entering marriage”

“Respect for sexual autonomy must be emphasized. Marriage does not preserve ceiling of autonomy.”

“A society which perceives women as pure and an embodiment of virtue has no qualms of subjecting them to virulent attack: to rape, honour killings, sex-determination and infanticide”

“anachronistic conceptions of ‘chastity’ and ‘honour’ have dictated the social and cultural lives of women, depriving them of the guarantees of dignity and privacy, contained in the Constitution.

The only judgement made by Justice Chandrachud in recent times which has upset Lutyens’ Delhi is his judgment denying further probe into the death of CBI Judge BH Loya, which several in Lutyens believe was a ‘suspicious’ death as Judge Loya was presiding over the Sohrabuddin case. While gushing over his other judgements and calling his coming tenure as Chief Justice of India from November 2022 to November 2024 as ‘a much awaited one for long-oppressed sections of society’, The Quint called the that judgement as J. Chandrachud ‘s achilles heel!

But for those outside the charmed circle of Lutyens’ Delhi, this tweet sums up the feelings over the going-ons in the highest court of the land, ever since the judiciary evolved the opaque collegium system which excludes any other branch of the state – including the legislature and the executive – from having any say in the appointment of judges – . Harvard is the nest of snakes – Shri Rajiv Malhotra