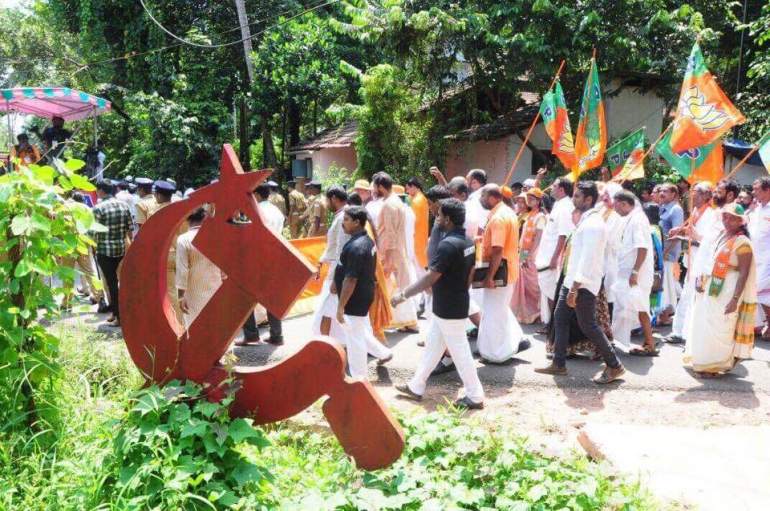 This week in October, Bharat will be celebrating Deepavali, to mark the homecoming of Sri Rama to Ayodhya after he killed Ravana and rescued his wife, Devi Sita. It is a celebration of the victory of good over evil.

For the people of Kerala, this Deepavali will be different. Just as Shabari waited patiently for Rama to arrive at her doorstep, Kerala has waited for long for a balm to heal the wounds inflicted by the twin evils of Communism and Jihadism. The Jana Raksha Yatra organized by the BJP has come in the nick of time.

Communism has been the bloodiest ideology the world has seen. It has caused more than 120 million deaths in the last century. If ever there was fascism in Bharat, it was seen during Indira Gandhi’s Emergency era and whenever the Communists ruled Kerala.

During Emergency, the RSS cadre put up a strong fight to restore democracy. Several RSS leaders were imprisoned; many went underground to campaign against Emergency. But the Communists made no contribution to restoring democracy. The young Communist cadre was disillusioned and several workers joined the RSS at that time.

Communism is intolerant to any ideology opposed to it. Like Islam, Communism does not tolerate anyone quitting its fold. The punishment is murder. A few people like Sadanand Master, have survived murderous attacks to tell their tale. His legs were coldly chopped off, as a lesson for leaving the Communist cadre to become an RSS Swayamsevak, post Emergency.

In 1969, Communist workers led by Pinaryi Vijayan, the present Chief Minister of Kerala, killed RSS worker Vadikkal Ramakrishnan. Ex-Communists say that Vijayan has provided a manual to kill and mutilate political opponents in the cruellest possible manner. The murders and mutilations of opponents are gory, to say the least. In the last 50 years, 284 RSS & BJP workers have been killed in Kerala by Communists. Their claims of dispensing social justice stand exposed by the fact that Dalits, women and even family friends have been brutally attacked and murdered by Communists for supporting the RSS and the BJP. All efforts for dialogue by the RSS and the BJP with the Communists have failed. This is the destructive, fascist face of Communism.

Bharat has an ancient tradition of democracy and rational debate; violence has been the last resort for opponents. Communism, a foreign ideology that has failed across the globe, cannot survive in a civilized society such as ours. Its exit is certain. The violence it has inflicted has left deep scars. People, who have borne torture and persecution by Communists and Islamists, need a healing touch. They are looking for reassurance and support from the rest of Bharat. They want to assert their right to live. They want to live in a democratic setup. Most importantly, they want the mad violence to stop.

It is in this background that the Jana Raksha Yatra was conceptualized. Sri. Amit Shah and Sri. Kummanam Rajasekharan flagged off the 15-day yatra on 3rd October in Payyanur, Kannur district. The yatra will cover all districts of Kerala except Kasaragod, Wayanad and Idukki and will culminate in a rally in Thiruvananthapuram on 17th October.

This yatra brings memories of the 1990 “Rama Rath Yatra” which mobilized karsevaks for the Rama temple in Ayodhya. It was led by Sri.L.K.Advani and ably organized by Sri. Narendra Modi, a BJP Gujarat General Secretary at the time. Managing the logistics, mobilizing the crowds, arranging relevant speakers, inviting leaders and making arrangements for the rallies & meetings en route, is a humongous task. The organizer is not merely arranging multiple events. He provides vision & strategy, motivates the cadre and charts a roadmap to reach the set goals.

In Kerala, the yatra aims to end violence and assert the right to live.  The BJP base is growing with each passing day of the yatra. This is not just a political fight for seats in the Assembly; it is a fight for democracy and nationalism. This can even be termed a Dharmic war to liberate the people of Kerala from a terror-regime. The yatra has succeeded in boosting the energy of karyakartas and establishing the BJP identity in places that are in the grip of Communist and Jihadis.

Every day, the yatra covers one district. The leaders meet martyrs’ families and victims in the morning, pay their respects to the departed souls, conduct one or two public meetings, start the padayatra at 3 pm along with the district teams, cover a distance of 12-14 kms and conduct a rally in the city. Food, coffee & tea, snacks are provided by local BJP teams to the thousands assembled for the yatra.

Even as slogans of Bharat Mata ki Jai, Vande Mataram and Jai BJP are raised, a team goes about picking strewn litter. Garbage collection bags are placed near food & tea stalls. Such is the eye for detail and the ingraining of the spirit of social responsibility and nationalism. Vehicle management, media & social media teams and lodging arrangements for karyakartas pouring in from across the country, are in place. A photo exhibition is arranged at each rally venue as a tribute to the martyrs.

Conducting a one-day event for 10000 to 20000 people takes months of preparation and an army of organizers. The effort required to mobilize and organize such an event every day for 15 consecutive days, with only volunteers, is unimaginable. It speaks volumes about the organizing leadership and commitment of the cadre involved. Communists declare territories as Party gramam, Party Booth, Party streets etc. Other political parties are not allowed to be active here. Transgression of this rule results in murder, right under the watch of the administration and the police. A massive show of strength was exhibited by the BJP in Pinarayi, a party gramam which is also CM Vijyayan’s den. This act of defiance was a fitting tribute to the 84 martyrs from Kannur.

Thrissur, which is a hub for the intellectual and business class, and which has a negligible presence of the BJP, saw an unprecedented crowd of 25000 people at the rally. More than 6000 karyakartas walked from Panoor to Kuthupurumba soaked to their bones in the torrential rain. Every day, at least 10000 people participate in the yatra and more assemble at the rally. The numbers are increasing each passing day. A highlight of the yatra is the strong participation of women and the involvement of martyrs’ families. The sacrifices made by women, who bravely send their sons and husbands for the cause of the nation, is incomparable to any other. There have been instances of women losing both their husband and son. The Mahila Morcha President, Smt. Renu Kumari was attacked by 40-45 men and her clothes were torn. Some families have been attacked multiple times by people known to them; even human relations are not important for Communists where ideology is concerned.

The Communist government rewards the killers with government or party posts. The administration and the police refuse protection to RSS and BJP workers.

But, the tide is changing. Christian leaders are now keen on meeting BJP leaders, an interest not previously seen. In Vadakkanchery, the Thrissur BJP President shared his experience of meeting a young boy who was wearing a saffron raksha on his wrist. When he asked the boy about it, the boy explained that he was a swayamsevak; he also mentioned that his father was a Communist.

A Congress leader, Sri. P M Manoj Embranthiri hosted Sri. Kummanam during the yatra and faced expulsion from his party. The massive turnout at the yatra has rattled the Kerala Communist government. Within a span of three days, they attacked two RSS workers & hurled country-made bombs at a BJP office in Kannur district.

Yuva Morcha teams from Jharkhand, Bihar, Orissa, Madhya Pradesh, Tamil Nadu, Karnataka are in Kerala to provide necessary support to the yatra. On 15th October, Mahila Morcha teams from all states will converge in Kerala under Smt. Vijaya Rahatkar’s leadership. In Delhi, Karnataka, Punjab and Chandigarh, padayatras and protests were organized in support of the yatra.

The Kerala BJP team and national BJP leaders have left no stone unturned to make the yatra successful. Sri. Kummanam, the state President, who is a veteran at organizing rallies, has been actively leading from the front, despite running a temperature. Other leaders like Sri. Surendran, Smt. Shobha Surendran, state-in-charge Sri. Nalin Kumar Kateel are ensuring that every detail is addressed. The leadership behind this marathon yatra is silently heralding in a stronger voice for the people, a stronger organization and a stronger political identity. As they focus on the yatra goals, personal glory is the last thing on the minds of both leaders and karyakartas.

A karyakarta from Karnataka narrates the instance of a chair on the dias at a public meeting. It had the name of Sri. B.L.Santhosh, National Organisational Joint General Secretary, tagged to it. When he was invited to grace the platform, Santhosh ji (as he is known), asked the stage manager to remove his name from the chair. He proceeded to sit with other karyakartas in the audience. Such is the silent leadership that motivates and galvanizes an army of karyakartas to work selflessly for the nation and the party.

Just as Nala and Neela built the Rama Setu to ferry Rama’s army to Lanka, the BJP organization is constructing a bridge to integrate Kerala with the democratic & nationalistic spirit of Bharat. It is also administering the healing sanjeevini to this much-wounded state.

When Rama’s vanara sena built the bridge to Lanka with large boulders, small squirrels ferried sand and pebbles to cement the boulders. Similarly national and state BJP leaders are building the ideological bridge while every karyakarta in Kerala is strengthening the organization at the grassroots. There are several management and leadership lessons to learn from this yatra and from the BJP Kerala team. 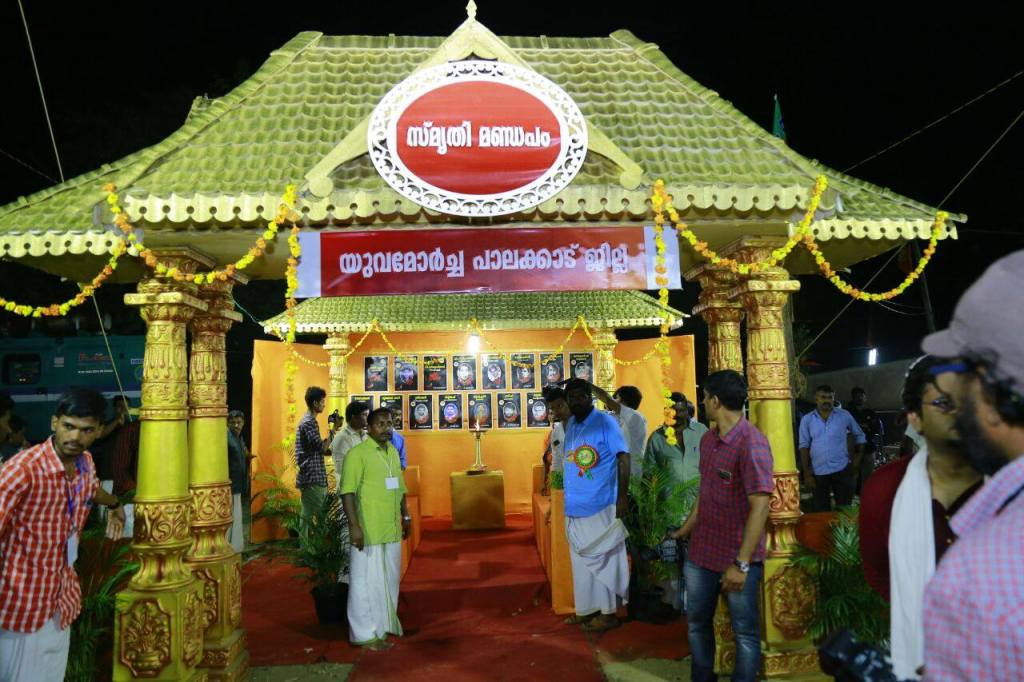 The victory of good over evil is imminent. More than political, the causes that RSS & BJP are fighting for are ideological and humanistic. The overwhelming response to the yatra in the violence-afflicted districts is a testimony to the changing undercurrents in the state. One thing is certain though; Kerala will never be the same after the Jana Raksha Yatra.

(This article first appeared at – https://www.readoo.in/2017/10/jana-raksha-yatra-saffron-balm-for-wounded-kerala and is being reproduced with the consent of the author)