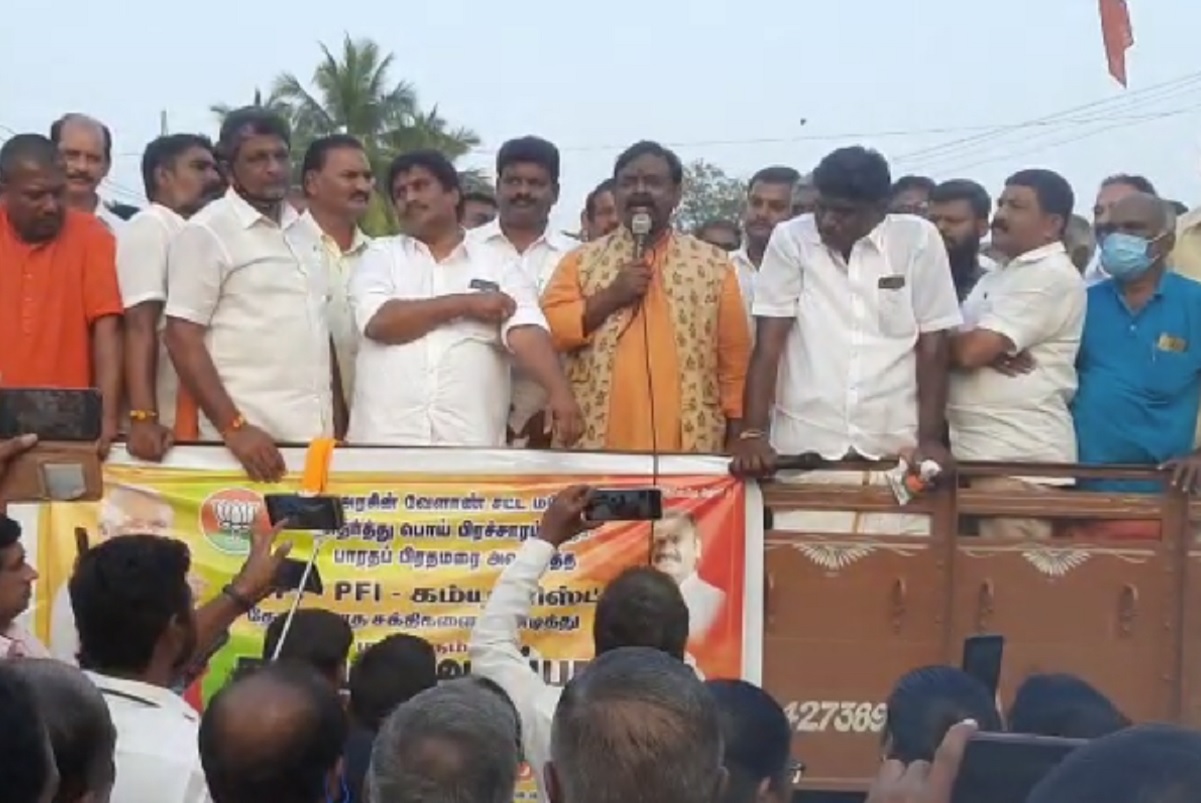 A Tamil Nadu BJP leader who has been vocal about the growing Islamic radicalism has been arrested, allegedly for making derogatory comments about the Islamic Prophet Muhammad and getting threats from Islamists for the same. On January 26th, SDPI, the political wing of PFI went on a march in support of the farmers protesting in Delhi. In this protest held in Coimbatore, a street play was enacted in which a person disguised as PM Modi could be seen begging to the leaders of other nations and acting brave in front of common people.

This act evoked widespread outrage and BJP organised a public meeting to counter it. In that meeting BJP leader Kalyanaraman is alleged to have talked about Muhammad in a demeaning way. On hearing about this, Muslims gathered on the spot and threw stones at the venue. Muslim organisations like Tamil Nadu Towheed Jamat(TNTJ) and Social Democratic Party of India (SDPI) protested demanding the arrest of Kalyanaraman. He has since been arrested based on the complaint from one United Jamaat.

While authorities are yet to ascertain the truth of the allegations against Kalyanaraman, yet radical Muslims could be seen baying for his blood in many videos spreading across social media. In one of them a man asks the audience “How many of you are ready to kill Kalyanaraman?” and the crowd goes crazy with everyone putting their hands up in the air eagerly. Another man says that as per Shariah Kalyanaraman should be chopped into pieces for speaking ill of Islam’s Prophet Muhammad and his wife. He also proudly claims that their community can murder him within the time span of batting an eyelid. He also threatens that he’ll be lying on the road dead like a dog.

This is getting out of hands.

We must pay attention to their unity when it comes to their religion,

While DK and DMK had been constantly been abusing us for decades, that is their strength. pic.twitter.com/8iRfNImymF

In a TNTJ meeting being shared in social media platforms the speaker issues ultimatum to the police that either they book Kalyanaraman under the Goondas act or leave him to the Muslim community. He boasts that the police are keeping him in jail because they know if he is let out his ‘wings will be clipped; he will be crushed; he will not be able to walk in the streets of TN. He won’t be able to climb another stage’ and ‘No one will dare to speak ill of Muslims’ he threatens. He asks the frenzied crowd whether they’ll cut his tongue, chop his legs or murder him all together. He says that they’ll teach a lesson to the whole country.

In the past Kalyanaraman was booked for one of his Facebook posts for alleged blasphemy. However the court granted him relief saying that opinions expressed based on an individual’s knowledge about a religion doesn’t amount to blasphemy.

Along with Kalyanaraman, two other BJP functionaries Jegannathan and Satheesh Kumar have also been taken into custody.

Both Congress and Viduthalai Chiruthaigal Party have demanded that the National Security Act be slapped on Kalyanaraman, eyeing the minority votes as the assembly election nears. However these people could be seen no where when Dravidar Kazhagam chief Veeramani said that DMK will comfortably win the assembly elections like it did back when Bhagwan Rama’s image was beaten with chappals. They stayed mum when people with DMK background demeaned Skandasashti Kavacham and Bhagwan Muruga through a YouTube channel Karuppar Kottam. These political parties and their leaders rather lent their voice to those running Karuppar Kottam channel when they were arrested.

As Kalyanaraman is facing threats to his life, Vanniyar Sangam, a Hindu caste outfit has come forward to warn the Islamists that they won’t be idle while threats are issued against Kalyanaraman’s life. They also recalled the incident when Ramalingam, a man who questioned proselytising Muslims was murdered for applying sacred ash on their foreheads, and assured them that they wouldn’t be staying mum this time. Apart from them, Hindu Makkal Katchi and BJP have been protesting demanding the release of Kalyanaraman and others.