Is UNHRC’s “Intervention Application” In The Supreme Court Justified ? 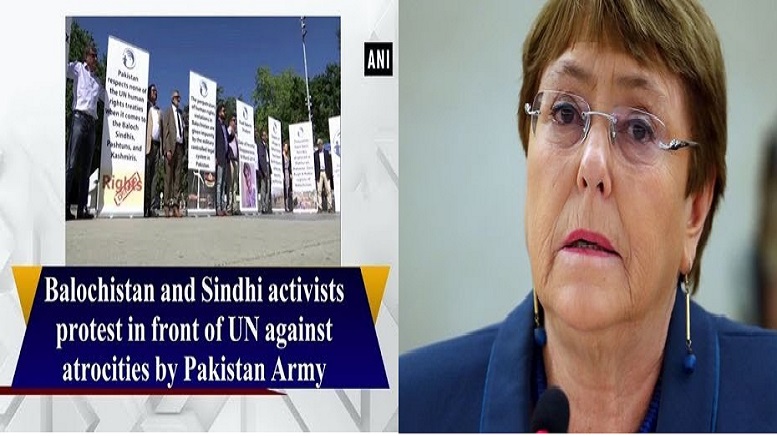 The UNHRC (United Nations Human Rights Commission)  has failed to condemn the genocide against Hindus in 1990 when Hindus were slaughtered in Kashmir but left no stone unturned in raising the human rights bogey with the backing of pro Pakistani lobby and  a few American senators mostly democrats, when article 370 was revoked in Kashmir by an act of parliament.

Three  decades later after that Hindu genocide happened, the UNHRC is still oblivious to the protests outside its UN headquarters going on currently by Sindhis which has been joined by Paktoons and Balochs against similar atrocities and killings by the Pakistan State against the gruesome killings  of these ethnic minorities. Similar protests have been held in September 2019 and earlier outside the UNHRC’s office but have fallen on deaf ears. The same UN body for human rights which has been lackadaisical in its response to the ethnic cleansing taking place in China (because the country has economic and military clout) where lakhs of Uighur Muslims have been massacred in the Xiangiang province – reminiscent of the concentration camps run by Hitler for Jews- has suddenly woken up from its slumber to raise its voice against CAA which is an internal matter of Bharat and harms no Bharatiya citizen, let alone a foreigner.

The UN body which reserves its energy and ire against Bharat, had shown the same alacrity and impetuousness when article 370 was revoked by an act duly ratified by both houses of parliament before it became a law. Similarly, CAA (Citizenship Amendment Act) which seeks to give citizenship to persecuted minorities of 6 religions who are on the verge of extinction in countries (Afghanistan, Pakistan & Bangladesh) who have declared Islam as their State religion, affects no Bharatiya citizen.

UNHRC has maintained a muted response to ethnic cleansing of minorities in Islamic and Communist countries like Pakistan and China but has shown over vigilantism in internal matters of Bharat which raises doubts about its functioning and objectivity.

Against this background, the UN High commissioner for human rights Michelle Bachelet’s filing of an “intervention application” in the Supreme court on CAA is ludicrous and preposterous even as Sindhis, Pakhtoons and Balochs are protesting outside her headquarters for justice against the mass slaughter of their brethren happening blatantly in Islamic State Pakistan.

This inexplicable move of the high commissioner is nothing but undue interference in the internal affairs of a democratic and secular country like Bharat which upholds all democratic norms and has all along allowed peaceful protests by its people.

Article 370 and CAA have been enacted through parliament which represents the power of the people in  a democracy like ours, unlike autocratic and puppet regimes being run in our neighborhood who inflict atrocities and torture on their minorities driving them on the verge of extinction. MEA (Ministry of external affairs) has rightly voiced its strong objection to such blatant interference by UNHRC in the internal affairs of largest democracy in the world.

Michelle Bachelet would have earned some accolades if she had filed an intervention application in the International Court Of Justice against the Communist regime in China for indulging in mass cleansing of Uighur UNHRC under its Commissioner Michelle Bachelet will do well to act immediately against Pakistan for human rights violations by its military in POK, Gilgit Baltistan and Pakhtoon province.

The UN body should take suo moto cognizance of the on-going protests in front of its headquarters in New York by Sindhis and Balochs against the human rights atrocities meted out by Pakistan State and send its team to assess the ground reality as hundreds of ethnic minorities are being silenced every hour by rogue state Pakistan.

The former Chilean President should not be seen wearing two sets of glasses as she intervenes in a democracy against an act of parliament (CAA) but fails to act in an ongoing humanitarian disaster taking place in the same part of the globe where dictatorial and Communist regimes are killing minorities and wiping out their antecedents in a grotesque show of inhumanity.

The credibility or otherwise of UNHRC and its Commissioner will be defined by its actions or the lack of it against large scale human rights violations in Pakistan and China and not by filing “intervention application” in our apex court against an Act which intends to give citizenship  of Bharat to persecuted minorities from 3 neighbouring countries which have declared Islam as their State religion.