Is the farmers protest justified? The recent farmers protests is being lauded in Lutyens’ circles. Op-ed writers, political parties and assorted talking heads, who for years had waxed eloquent about the crying need for farm reforms, are now glibly regurgitating the protestors’ demands to rescind those very reforms. As is often the case these days, the best commentary on this major policy reform comes from perceptive voices on social media.

We reproduce two such analyses of the current farm protests below. The first one is by Anurag Singh, a value investor and IIM-Lucknow alumnus, who explains the economics behind the whole issue and why despite all protestations to the contrary, this is in no way a pan-Bharat protest:

“What is the farmers’ protest all about? Who gets impacted by it and how? Why are protests concentrated in Punjab and Haryana? Are these really farmers or traders losing grip on monopoly? Are farmers being misled? Let numbers do the talking.

A top-down view of production in Bharat is in order here. What does Bharat’s agriculture sector produce in a year? I like the below chart for FY 2015. Now to understand the complexity, we will have to work with one crop and dig details. Let’s work with Wheat. Something is working well when production goes up consistently. However, while supply is great, demand is not growing as much. Look at the wheat consumption in Bharat. As we see, the demand is consistently below supply by ~ 10 million tons. Who needs this extra 10% wheat? Not in Bharat.

Can we export? This is unlikely. This is where it gets complicated. Let’s see the United States Department of Agriculture report on agriculture. The European Union, China, and Bharat accounted for a little over 50 percent of the world’s wheat production (762 million tons) in 2018/19.

However, we hardly export any wheat. Bharat doesn’t even feature as a wheat exporter in chart below. Bharat is expected to be a marginal net wheat exporter during the projection period. This implies that Bharat is a price taker in wheat trade. We can’t set the price internationally. 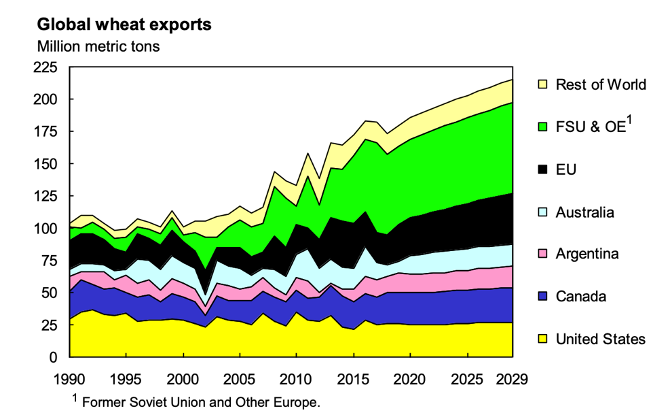 Even if we want to export, there is a major problem. Growth in wheat imports is concentrated in developing countries. Most developed nations with better purchasing are wheat surplus. Globally, the consumption of wheat is falling below the production as we see in the below graphic. Since developed nations have surplus, major wheat importers will be African nations which are hardly lucrative markets. It keeps the wheat prices depressed, closing the exports door for us. See the international prices of wheat and how these are relatively stable at $200 per ton. This translates to Rs. 1400 per quintal vs the MSP of Rs. 1975 per quintal. So, MSP is a good 40% above the international prices! No exports can happen at this rate. MSP appears to be the root of current agitation. Farmers ask for a minimum price guarantee so he can predict his income.

We have already established the following-

(1) Bharat already has wheat surplus and we need less of it.

(2) Advanced seeds are causing yields to explode resulting in bumper harvests which aggravate the problem.

(3) Since exports potential is absent, all produce has to be paid by Bharatiyas.

If all produce is bought at MSP, farmers can look at an increasing production and rising income. Sounds good, except that someone has to pay for wheat which we don’t need. Because if government procures excess wheat, this is what happens. See the average stocks of FCI for wheat and rice. 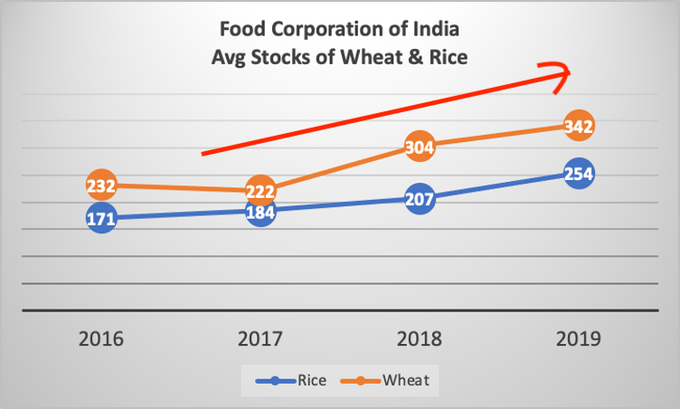 This stock is approximately 3 years of production. These are absurd holding levels. Add to this the sudden spike in MSP rates in last 5 years and we are looking at substantial deficits for the Food Corporation of India. How much deficit? Well, it is Rs. 2.5 lakh crores. 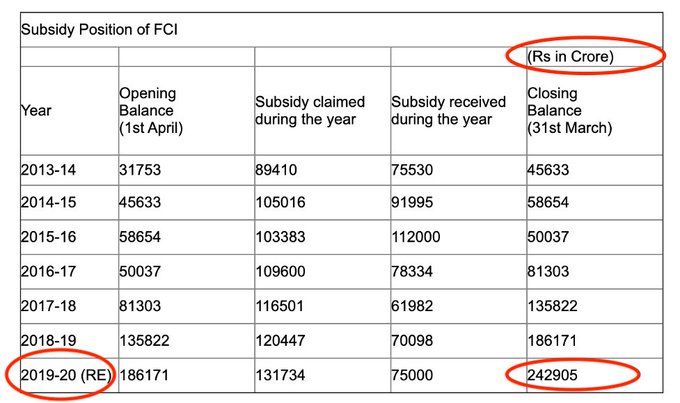 Who pays for this money? Well, we the people. And I’m fine for it, if it does well for the farmer. However, the challenges are much bigger and rarely solved by throwing money at the problem. As with most things, Bharat is diverse and so are the issues.

Now, why are protests concentrated in Punjab and Haryana?

I tried to explore the money trail (credit to G. Madhavankutty at ET prime). Graphic below indicates the percentage of wheat bought through MSP in each state. As is obvious, 70%-80% of wheat sells (i.e. is procured) at MSP in the 2 states. Not so much in rest of the Bharat. 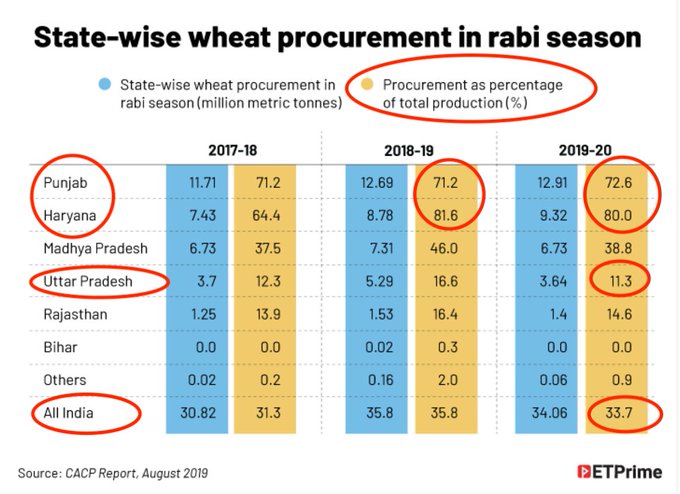 So, MSP is solving only for Punjab and Haryana farmers. It is irrelevant for rest of Bharat. No wonder we don’t see others in this protest. So, do you still recommend MSP as the holy grail for Bharat’s farmer? I doubt it.

MSP is breeding the same inequality that is manifested in every aspect of our system. Rich farmer gets richer and lobbies to maintain status quo. If APMCs stay, who gains more? Recall License Raj of the 1970s. This brings us to the economics of APMCs.

Are APMCs really inefficient or have they been a victim here? Do farmers want APMCs or have they been propped up by trading lobby behind the scenes? I was also intrigued by the great deal of support coming from Punjab CM to the protest. Tax money trail could offer some clues.

Look at the 2014 report of FCI published in the economic survey of India. We see that although Punjab and Haryana lead in MSP procurements, the net result for the farmers is almost the same across the country. This is due to the arbitrary taxes and fees that APMCs levy on the trade. Punjab leads with 15% levies as percentage of MSP. In the end, farmers get a net Rs. 1546 per quintal, which is not much different than his counterpart in UP or even Bihar. So, while MSP works for some, it certainly doesn’t work for the farmer.

That explains the huge political support “behind” the farmers. At 15% taxes/ levies on Rs. 64,000 trade annually, Rs. 9600 crore is on the table here for stakeholders in Punjab, including the state government. It can move a lot of mountains and yes, a protest as well.

So where does that leave us? We can increase overall prices and guarantee MSPs, but APMC brokerages and taxes ruin it for the farmer. The middlemen, including the state gets richer via brokerage on farmer’s produce. So much for being pro farmer government.

Additionally, the FCI keeps getting bankrupt and will eventually eat into our taxes. I take the liberty of assuming that most urban consumers are not willing to pay more for agri-produce, else onion prices wouldn’t have changed governments in the past.

Also please don’t forget about PM Kissan Scheme that pays fixed income to all farmers across Bharat. Direct transfer through such schemes is always much beneficial in Bharat vs the inefficient APMC and FCI procurement doles through MSPs.

The only way to pay farmers more is to cut the broker and state taxes. Just compare the mandi prices and what retailer sells for and you would know the potential. I think the new laws do exactly that. But of course, it will hurt some along the way. Just like every disruption does.

Another thread by @akshayalladi addresses the criticism that the farm reforms were introduced ‘without adequate consultation’ with all stakeholders:

“The argument on the merits of the farm reform bill are anyway compelling, and validated by experts. Self described “Pro-reform” people in commentariat have hence, latched on to the high minded principle – laws should be with consultations.

Read this report of Standing Committee of Parliament submitted in 2019. It mentions the reforms called for in APMC. The standing committee, by the way, has 31 MPs across parties, only 13 of whom were from the BJP.

Read this news story in The Indian Express about a committee of CMs to know what their terms of reference was.

Now read what the committee called for. Please note ECA removal was called for also by Kamal Nath. Read also what is said about contract farming.

Have the reforms happened then in a hurry as a “Jhatka”, should we be more incremental? Even the reports above would tell about the model APML law. Read this interview now from 2016 about incremental steps towards reform in Maharashtra for example.

The only value to society added by a journalist or a commentator is information, research and analysis. It is okay to have a different point of view, and come up with different conclusions based on a different analysis. Even ideological differences are not just ok, but healthy.

But at least journalists and commentators (including “experts”) should do themselves and their readers the courtesy of some basic research. Then it isn’t about a different point of view, it is just laziness and dishonesty dressed up as principled dissent.”

Shocking tale of police apathy towards a Love Jihad victim