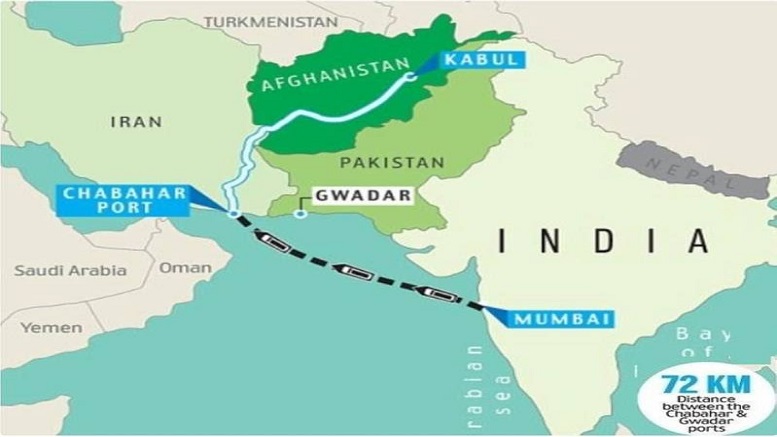 As the USS Nimitz, the largest warship in the world, saunters and swaggers in the South China Sea and the Indian Ocean, with the Bharatiya warships escorting it in a joint show of strength against China, the latter seems to have nuked Bharat in wresting the strategic Chabahar port.

The Indo-US joint exercise could have its first casualty for Bharat as China seizes in on Bharat’s lackadaisical approach in building the Chabahar Zandein railway line to Afghanistan with the motive to bypass Pakistan apart from getting access to central Asia. Swooping like a vulture, the dragon has thrown the 400 billion dollar bait to Iran in pursuance of its debt diplomacy to prize away the strategic Chabahar port which is located just 172 kms of the Gwadar port which China is already in control off. The US sanctions have been weighing on Iran for some time now and its economy is slackening in the face of its dwindling oil exports.

Iran’s economy is down by a whopping 6% as it reels under the triple impact of the US sanctions, dipping oil prices and the pandemic inflicted by its new trading partner and ally China. Bharat has drastically cut its energy imports from Iran (oil imports are down from approximately USD 27 million to USD 1.7 million), toeing the American line after the imposition of US sanctions on Iran in 2018.

China, which has always pounced on such opportunities, was quick to offer cash starved Iran an economic mirage as it unfurled a massive 400 billion dollar investment package for Iran in return for cheap oil imports from Iran over the next 25 years. ‘Your enemy’s enemy is your friend’ and China is strictly following that adage. If China is able to prize away Chabahar from Bharat, it will be a big setback to Bharat’s strategic interests in the region, apart from casting shadows on its foreign policy.

China’s mischief of encircling Bharat at sea with presence in Hadmanpota, Djibouti and Gwadar will get a big boost if it manages to snatch Chabahar by wooing Iran, which off late has had a strained relation with Bharat. The Khamenei regime has been critical of CAA and Article 370 which has not pleased south block one bit.

Iran is also peeved with Bharat as it believes that the latter has succumbed to the US pressure and thus, intentionally slowed the work on the Chabahar Zahedan rail link as part of the tripartite Iran-Afghanistan-Bharat agreement signed in 2016.

The Iranian railways has decided to complete the 624 km rail link on its own using 400 million dollars of its own Iranian National Development Fund so that the project can be completed by 2022. This project was otherwise meant to be completed with the collaboration of Indian Railways Construction (IRCON).

Bharat has earmarked 100 crore in the current budget for Chabahar committing an investment of almost 8 billion dollars in building port facilities and berths at the strategic port in Iran’s Sistan Baluchistan province adjacent to the gulf of Oman. The trilateral port and railroad agreements were signed simultaneously in 2016 between PM Modi, Rouhani and Ashraf Ghani.

Amidst the straining of ties between Iran and Bharat, there are reports that Iran is leasing out the Bandar-e-jask port to China which could give China strategic and threatening access to waters used for a majority of world oil trade in the strait of Hormuz.

K C Singh, former Ambassador to Iran has cautioned the government with Iran in his tweets.

This impinges on India’s so called strategic ties with Iran & use of Chabahar port. Jask lies to west of Chabahar & right before Straits of Hormuz. China thus extends its control along the Pak-Iran coast. However this may be tactical as Iran values strategic independence.

Thus, if China were to get access to Jask – if the reports in NYT are to be believed as part of its 18 page agreement with Iran which still has to be ratified by the Iranian parliament but apparently already has the approval of its supreme leader Ali Khamenei – then it would control one of the biggest oil and energy trade routes of the world much to the chagrin of America and its new ally Bharat.

Though Iran’s foreign ministry spokesperson Mousavi has sought to clear the air on China by saying that Iran will continue to have balanced relations with Eurasian, Southern and eastern Asian nations, the Chinese bait for the crippling economy of Iran will be hard to leave.

The first agreement on Chabahar was signed by then PM Vajpayee with his Iranian counterpart in 2001. 19 years hence, the port seems to be all but slipping out of Bharat’s hands ominously into the deadly jaws of the dragon. Can Iran be blamed or is Chabahar a casualty of the new Bharat-US alliance? Either way China stands to gain at the expense of Bharat.

ISI took in two arrested terrorists through Gwadar port, trained them in Sindh