“Hum vikas ko chatengey (will we lick development)?” – Muslim voter in Bihar on Modi and BJP 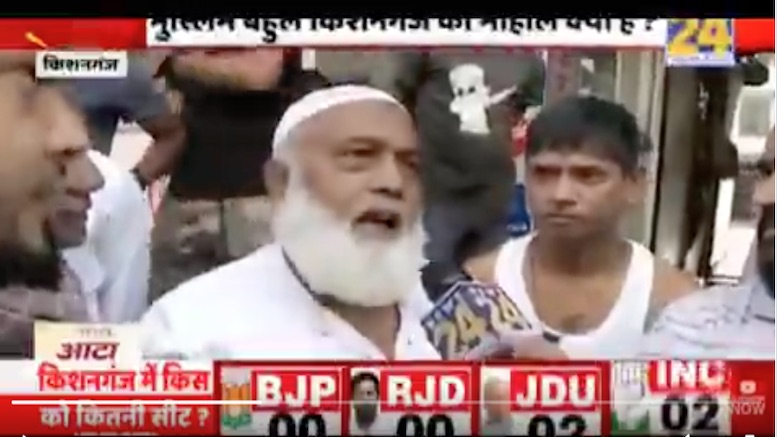 Elections in Bharat always provide good insight into what issues resonate with society at grassroots; often the findings are contrary to the platitudes dished out by idealistic/disconnected/dishonest op-ed writers.

The ongoing Bihar assembly election is witnessing the familiar ‘communal’ BJP-JDU versus ‘secular’ RJD-Congress-Communist tussle. A bewildering host of minor parties are also trying to queer the pitch for the two main groups.

Another ‘secular’ front has emerged in the form of an AIMIM-BSP-RLSP alliance. How this group is allowed to get away with calling themselves ‘secular’, given the rabidly Islamist nature of AIMIM, a party founded by the genocidal Razakars who tried to forcefully merge the princely state of Hyderabad with Pakistan, is just another example of the unique beast called Indian multi-party secular, socialist, democracy.

With this background, it will be interesting to see where the ‘secular’ vote (Indian media code for Muslim/Christian/caste-based vote) will go. In this context, a TV channel’s interaction with Muslim voters in Kishanganj, a seat with 70% Muslim electorate, makes for interesting viewing. Kishanganj is one of the 24 seats from where AIMIM is contesting, and its candidate Qamrul Hoda had won this seat in the October 2019 assembly by-polls in the state.

See how much they are so clear about their Anti BJP agenda,

Do watch this Video pic.twitter.com/xLKPdyGWyg

In the first video clip, a man tells the interviewer, “We are sure the AIMIM candidate will win from here (Kishanganj) and he will support Tejashwi (for CM)…we will take a promise from the AIMIM party that they will eventually support whichever anti-BJP front forms the government.”

The interviewer (not clear which community he belongs to) then asks, “It is said that Muslims first vote for whoever can defeat BJP, second they vote for whoever is dear to them, third they see who is winning and vote accordingly. Do you think that Owaisi’s (AIMIM supremo) contesting in this area, Seemanchal, area can hurt RJD too?”

The man answers, “No, it will not damage (RJD’s prospects) in any way. Where Tejashwi’s (RJD) presence is stronger, AIMIM people are taking a back seat and supporting his candidate, and where AIMIM is strong, Tejashwi’s people are returning the favor. They both (RJD and AIMIM) will come together to establish a government in Bihar.”

70% Muxlïms gonna vote for AIMIM
Imagine if they become 50%

We'll not be able to see Hindu Prime minister pic.twitter.com/5nG94aUoum

In the second clip, a young educated-looking man speaks up, “I would like to correct you. You spoke about how Muslims vote against BJP. It’s not only Muslims, any minority looks for its safety zone..as you know, BJP is anti-Muslim. That is the reason we vote against BJP.”

“Why do you think so (that BJP is anti-Muslim)?”, asks the interviewer.

“Hum vikas ko chatengey? (will we lick development?)”, says an old man, obliquely acknowledging that BJP is indeed providing better development all around, but that is not enough for him.

He continues, “If attacks continue on our religion (Islam)..if they attack our religion again and again, should we lick development (makes licking gesture with hand and mouth)? They are implementing new laws like NRC, they are passing laws for Madrassas so that Quran is not taught….what is this? This is an attack on Islam and Muslims. Muslims across the world are protesting against France, and this Modi Government is standing with them (France). Our quam (community) is being bashed by non-Muslims..today, if we had united on one platform, the Modi sarkar wouldn’t function….the man we chose as Prime Minister, Modi, thinking that the BJP government would do something good for Islam and Muslims, they are not doing anything good. NRC will only apply to Muslims, not on others. What is this? He is trying to show Muslims (down). Today, that Yogi said a new law should be made against Love Jihad? What law will you make?”

Such views will be hard to digest for Hindus who have been weaned on a steady diet of ‘sarv dharm sambhav’ or ‘all people want is vikas, jobs, nothing else’, or ‘stop this Hindu-Muslim nonsense.’ The PM has also appealed time and again to all citizens, and even Bharat’s Islamic neighbours, to come together and fight poverty. But such appeals fall on deaf ears, except to confuse gullible Hindus.

Here is what Hindus must learn:

For a Muslim, his religious issues are paramount, and they can never forgive BJP for Ram Mandir (never mind it was a decision given by the courts) or Triple Talaq law (never mind that this practise was banned even in Islamic nations like Pakistan and Saudi). Even when they vote for RJD, NCP, SP or BSP, it’s because an outright Islamist party is not a viable option at that point of time. And even while they will heap abuses on BJP, they have no compunction in making demands of the party (if it comes in power).

LESSON: Hindus need to develop this cold, pragmatic, ruthlessness. In the short-term we have to vote for whichever party is least damaging (best we can hope for considering state of our polity) to our interests. At the same time, we need to keep negotiating with all other parties for a better deal. We have to stop sacrificing our interests at the altar of nationalism, and exploit all loopholes in our system of governance to protect Hindu interests. The ultimate goal has to be Constitutional reform so that Hindu Dharma and other indigenous religions are granted special protection and rights as state religions. If we don’t get this special protection in Bharat, we will not survive as this is the only country we can truly call home. We must also question the present system of electoral democracy which is dividing Hindus into ever smaller interest groups, and allowing hostile anti-Hindu elements to manipulate the system and come to power.

Even that 8% Muslim vote coming BJP’s way can be assumed to be largely tactical. The Muslim Rashtriya Manch (MRM), the Muslim wing of RSS, also took part in protests against French President Emmanuel Macron for his alleged support to blasphemy against Islam’s Prophet. But all Macron did was crack down on Islamic extremism and stand up for his country’s values after a school teacher was beheaded in class for showing Charlie Hebdo cartoons of Islam’s Prophet. In the following days, a woman was beheaded in Church and two others killed by an Islamist terrorist in the French city of Nice. Our government merely expressed its support to France in its fight against terrorism. What do Muslims, including those of MRM, expect – that we should cut ties with France, return all Rafales?

The whole brouhaha over NRC is an excellent case in point. NRC has only been implemented in Assam till now, that too at the Supreme Court’s prodding. All-India NRC has just been proposed and laws are yet to be drafted. Meanwhile, Supreme Court and all parties in Parliament have acknowledged that illegal immigration from Bangladesh is a serious threat to national security. CAA was passed to provide expedited citizenship to persecuted minority refugees from 3 neighbouring Islamic nations, who had already entered Bharat. Clearly, any nation-wide NRC will be aimed at weeding out illegal immigration by Bangladeshi Muslims – what is the Indian Muslim objection to this? Don’t they claim that they stayed on in Bharat as they wanted to live in a secular state. So why do they want to invite back those Muslims who asked for partition?

LESSON: Do not trust mainstream or left-liberal media, however well-intentioned the writer or columnist. Our elites are conditioned to talk down to Hindus and be deferential to minorities. Even if a few of them understand the danger of Islamism, they expect Hindus to ‘reform’ and set the example for others to follow – this is nothing but leading Hindus to collective suicide. Reject them, trust your own.

Many of these lessons apply to BJP too – at the very least, they should shut down the sectarian minority affairs ministry which is splurging precious resources that can change the lives of poor Hindus, tribals and other Dharmics. No amount of scholarships can modify individuals unless we first tackle the venomous religious institutions which start indoctrinating them from birth.

And finally, one thing which the Muslim man said that every Hindu should take seriously is this – “Hum vikas ko chatengey?” Honestly, what use is development if our girls are not safe, our children are indoctrinated by the state while we watch helplessly, our temples get vandalised and looted, our deities and Gods abused with impunity, our festival celebrations subjected to annual legal battles, and our people converted out of their rich Dharma by unscrupulous, bigoted, foreign-funded proselytisers?