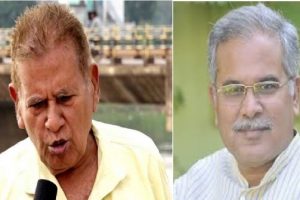 The father of Chattisgarh’s new CM is opposed to Brahmins being appointed in his son’s cabinet.  Speaking to reporters in Raipur’s circuit house, Mr. Nand Kumar Baghel, father of the CM Mr. Bhupesh Baghel, said that Brahmins have got their share and should not be included in the Chattisgarh cabinet expansion, news site newsstate.com has reported. Mr. Baghel also demanded that Kawardha MLA Mohammad Akbar should be made a minister.

Currently, apart from CM Bhupesh Bhagel, two other ex-contenders for the CM post – TS Singh Deo &
Tamradhwaj Sahu – have been sworn in as ministers, but their portfolios have not yet been announced.

Mr. Nand Kumar Baghel’s anti-Brahmin animus appears to be deep-rooted. Back in 2001, he had penned a controversial book ‘Brahman Kumar, Ravan Ko Mat Maro‘ (Brahman, don’t kill Ravan) for which he was arrested and charged with fomenting communal trouble. The sale of the book was banned by the Chattisgarh government in view of derogatory remarks made by the author Nand Kumar Baghel against some leaders and Hindu deities.

At that time, Bhupesh Bhagel was a minister in the Congress Government of Chattisgarh led by Ajit Jogi. Interestingly, the book had a forward written by the author in which he had described the Chief Minister, Mr. Ajit Jogi, as an inspiration behind the work.

Here is another video from July this year, in which Mr. Nand Kumar Baghel expounds on his theory of ticket distribution along caste lines. He ends by saying “Brahmin ki buddhi, Kurmi/teli ki shakti agar ek ho jaye, to Chattisgarh pardesiyon se mukt ho jaayega” (if the intelligence of Brahmins & the strength of Kurmi and Telis comes together, then Chattisgarh will be rid of outsiders)

Thus far, the new Chattisgarh CM and his Congress party president Rahul Gandhi (proudly proclaimed to be a janeu-dhari Brahmin by Congress one year back) have both chosen to keep quiet on the casteist and xenophobic outlook of Nand Kumar Baghel.