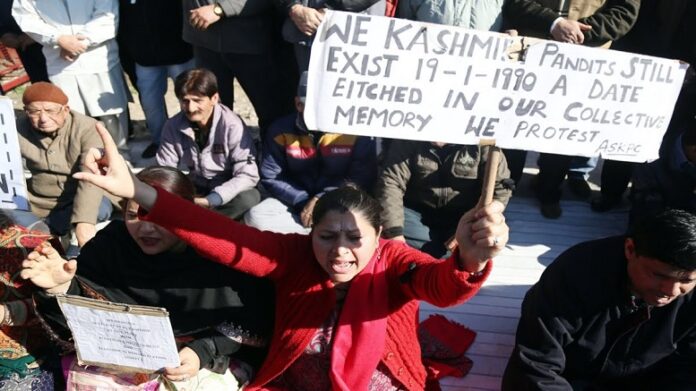 There were condolences galore from the opposition for the unfortunate deaths of farmers in Lakhimpur Kheri and lot of coverage and sympathy for Aryan khan’s arrest in Lutyens’ media and Bollywood, but the same people had very little to say about the targeted killings in Kashmir of the minority community in cold blood – among them a woman school principal  who was not protesting but only imparting education to children.

The Lakhimpur Kheri incident had a section of the media and the so called secular parties  and their leaders up in arms against the government. The Supreme Court taking suo moto cognizance intervened, with lightning speed not seen even weeks after the WB anti-Hindu pogrom started on May 2, and one expects that the guilty including those who were involved in the gruesome lynching will be brought to book.

But the same Lutyens media and the parties whose leaders visited the bereaved families and were vociferously demanding justice in Lakhimpur Kheri  did not have a word of condolence, sympathy or condemnation for the targeted killings in Kashmir where innocent people of a minority community were killed in broad daylight, reviving memories of the dreaded 1990 when Kashmiri Pandits were hunted and killed mercilessly leading to their mass exodus from the valley.

Even then these pseudo seculars and the parties they represented and still represent had maintained a deafening silence and turned a blind eye to the gory killings of the Kashmiri Pandits and their subsequent exodus. Farooq Abdullah, the then Chief minister of J&K, was a mute spectator to the whole carnage and massacre of Hindus and did nothing to save them.

The killing of innocent citizens who were serving humanity in their capacities as chemists and  teachers is a blot in the face of  democracy and a slap in the face of these so called secular parties and their leaders who are selective in their condemnation and condolence as for them it is  a means to extract political mileage and revive their sagging political careers.
Thus, you had the Gandhis and the Sidhus making a beeline for Lakhimpur Kheri to offer their condolences to the families of the farmers but none of them had a word of condemnation, let alone visiting the Hindu and Sikh families who had lost their dear ones to the bullet of terrorists.

Politics of opportunism was on full display by these leaders and the parties they represent as the UP elections are round the corner and unfortunate incidents like these are a perfect opportunity to resurrect political slides and fortunes for some.

Those involved in the Lakhimpur Kheri incident should be made to face the law, including those who mercilessly lynched the BJP workers in the Thar jeep, but the politicians and a section of the media should  come out of their selective-outrage strategy and also go and meet the families  of the Hindus  and Sikhs who lost their  loved ones to terrorists bullets in Kashmir.