How Bharat Should Use Pakistan’s Water Crisis To End Terror 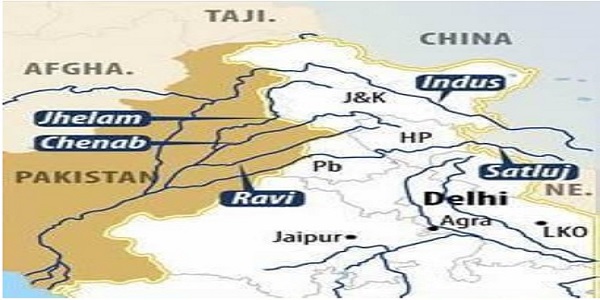 Pakistan for decades is exporting terrorism into Bharat and waging calibrated hybrid war in Kashmir. The state of Pakistan itself was born as a result of hatred for the Idea of Bharat. It is, from years, waging fourth-generation war in J&K and other volatile parts of Bharat. Pakistan in its hate for Bharat and for the dream of Breaking Bharat, has always worked on our weaknesses and has used our weaknesses as a conventional strategic weapon to create havoc.

An enemy who is well aware of our deficiencies and blemishes is hundreds times more dangerous than one who isn’t. And hence it is critical for Bharat to know the Achilles heels of Pakistan and use them to have an upper hand over enemy. 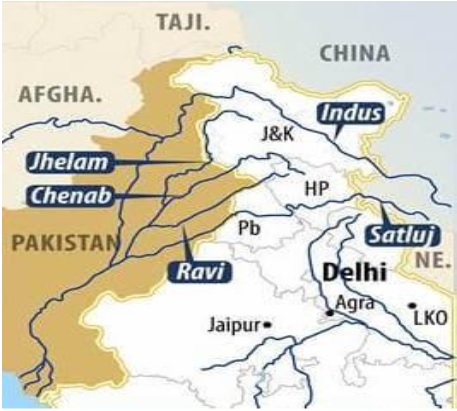 One of such vulnerability of our vicinal state is scarcity of water. Pakistan is suffering from a severe water crisis and most of its water requirements are fulfilled by rivers from across the border. 6 major rivers from Bharat and 7 major rivers from Afghanistan flow into Pakistan. The state of M.A. Jinnah wages proxy war against the same very nations from whom it receives an essential requirements of life – Water.

According to a report by IMF, Pakistan ranks third in the world among countries facing acute water shortage. So as the reports from UNDP and PCRWR echoes this problem. The problem is such severe that not even the 5,000 northern glaciers can save the country from it. Its per capita water availability is 1017 cubic meters and the scarcity threshold is 1,000 cubic meters. The same per capita annual water availability in 2009 was 1,500 c.ms and was 5,500 c.ms in 1950.

In 2016 PCRWR reported that Pakistan has crossed ‘Water Stressed Line’ in 1990 and has crossed the ‘Water Scarcity Line’ in 2005. Pakistan is likely to face acute water shortage and drought like situation in near future around 2025. By 2040 it will be the most water stressed country in the region.

The problem is not just of water scarcity but also of water management and irresponsible water consumption. According to a report, Pakistan has the 4th highest water consumption rate in the world and has world’s highest water intensity rate (amount of water used per unit of GDP in cubic meters). Its canal water system which is prime source of irrigation is highly underpriced and can recover only a quarter of cost. It has grossly inefficient flood water storage system due to scarcity of dams. Pak receives 145 million acre feet of water every year, most of it from western rivers from Bharat, but it can only save 13.7 million acre feet. Pak needs 40 MAF water but 29 MAF is wasted due to lack of dams.

So what can Bharat do with Pakistan’s water scarcity? The answer lies in the proper understanding of the Indus Water Treaty (IWT). To inspect that the deal is being followed, inspectional tours are carried out by both the sides. Till date 118 such tours have taken place. Under IWT Bharat can store total 3.6 MAF of western rivers i.e. Indus, Chenab & Jhelum, while Bharat only stores 13.88% of what is allowed which is just 0.5 MAF. Authorized irrigational area from waters of western rivers is 1.32 million acres and currently Bharat irrigates only 0.8 million acres. And total eastern river water allocated for Bharat’s usage under IWT is 33 MAF. Pakistan receives annual water of around 154 MAF while authorized is 136 MAF.

Is Bharat doing anything to use its share effectively? Bharat is using its money very pragmatically on these rivers on all possible fronts. Some of the Dams constructed on them are Chutak HE Plant, Kishanganga Dam, Pakul Dam and lower Kalnai HEP and under constructions are Shahparkandi project and Ujh multipurpose project. Chakul Dam on Suru River in Kargil Dist can generate 44 MW of electricity. Kishanganga Dam (Bandipora, N. Kashmir) is another huge project. Pakal Dul Dam (Kishtwar) on Marusadar River is a 167 m CFPO dam with 1,000 MW capacity. Bursar Dam with 265 m height has a storage capacity of 2 MAF water. Shahparkandi Dam in Pathankot is a 206 MW capacity project which can irrigate 37,000 hectares of land. Ujh multipurpose project has a storage capacity of 781 million cubic meters of waters.

What can be the impact of Bharat’s closure or better usage of its water on Pakistan can be understood from the fact that one Chenab River provides water to 21 canals and irrigates 7 million acres of land in Punjab, Pakistan. Storage of water in Baglihal Dam reduced the flow of water in Chenab River during sowing periods in Punjab province and adversely affected agriculture. Pakistan in that course of time lost 23,000 cusecs of water and 3.5 million agriculture tracts were barren. Due to water scarcity, the things which are at risk in Pakistan is 20% of GDP, 75% of Total Export Revenue and 42% of Total Labour Force.

Not properly utilizing our share of water also causes our people to suffer from lack of water. Water is the source of electricity and if we allow our share of our water flow uninterrupted and unutilized, we are losing the electricity we could’ve made from it. According to an estimate the annual loss suffered by state of Jammu & Kashmir is approximately 12,000 crore rupees in the energy sector and 40,000 crore rupees in the agriculture and power sector.

Also there is no treaty between Pakistan and Afghanistan for the code of conduct in sharing waters of 7 common rivers between them. Like the Kabul River which is home to 23% of Afghan population is also a vital source of irrigation in Khyber Pakhtunkhwa (KPK) province of Pakistan. Any storage project on Kabul River can affect three major canal systems (irrigating around 72,000 acres of land) in KPK including Warsak Canal System. Other Rivers include Kurram River flowing from Pakhtia, Afghanistan to Kurram Agency, FATA where it irrigates around 80,000 acres land. Another such river is Gomalis River rising from Ghazni in Afghanistan to South Waziristan Agency, FATA.

Afghanistan, with financial assistance from Bharat, is constructing almost 12 multipurpose irrigation and hydropower dams on these rivers. The Afghan Government has planned to build $32 m Machalgo dam on Kurram to assist people of Pakhtia. The Kama diversion dam with storage capacity of 0.445 MAF will generate 45 MW electricity and will irrigate 28,740 acres land which can reduce water flow into Warsak canal by 8-11%. Afghanistan has completed studies for 12 additional hydropower projects on River Kabul with total electricity capacity of 1.177 MW and will store 4.7 MAF water.

Bharat can use water as a strategic weapon against a terrorist exporting nation and proxy war waging water scarce vicinal state. Pakistan’s severe water crisis is an opening for Bharat to use it as a diplomatic tool to deal with ‘Suicidal Pakistan’. Water can stop Terror.