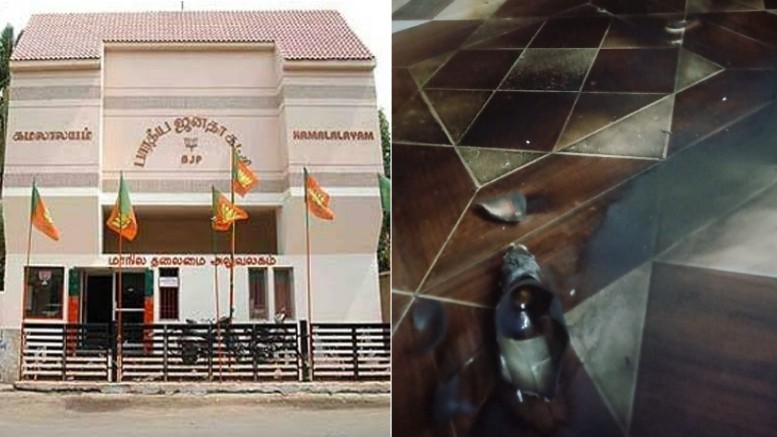 Petrol bombs were hurled at the BJP state head quarters in Chennai last night. Tamil Nadu police have arrested a person and released a statement saying he did it to condemn state president K.Annamalai’s remarks about NEET. However there are reports suggesting that he could have been paid to hurl the petrol bombs. Fortunately the office was closed as it was midnight and no one was injured.

Last night around 1.30 AM, two unidentified persons came in a two-wheeler and hurled petrol filled bottles on Kamalalayam, the state BJP HQ in Chennai. The HQ is guarded by police round the clock. Yet the miscreants managed to hurl the bombs and get away. But one of them has been identified from the CCTV feeds and arrested.

The person who hurled the petrol bombs has been identified as Vinoth(38) who had allegedly claimed that he did not like the stand BJP has taken in the NEET issue and angered by it he hurled the petrol bombs at BJP HQ. The statement released by police says that he is a history sheeter and more than 10 cases are pending against him.

He had earlier hurled bombs at a TASMAC shop in 2015, as a mark of protest to remove it. But later it was revealed that he was paid by a VCK functionary to do it to amplify the party chief Thirumavalavan’s protests against liquor shops. In 2017 he had hurled petrol bombs at Thenampet police station. That time he was allegedly paid by a gangster to do it. The gangster thought police won’t let them do rowdyism unless they were made to fear them. To achieve it he paid Vinoth to hurl petrol bombs at the Thenampet police station.

But police, in their statement, have claimed that he had a habit of throwing petrol bombs in a drunken state, in a show of discontent in matters pertaining to public welfare. So now questions are being raised as to why a 38 year old history sheeter would care about the NEET issue to go to the extent of hurling petrol bombs.

TNBJP president K.Annamalai who spoke to the media regarding the issue accused the police of erasing evidence and called the reason told by Vinoth a joke. Police had allegedly washed the floor and cleaned up before forensic officials could arrive. Annamalai has demanded an NIA inquiry into the incident and sought the TN government to hype the security given to the HQ. He has also accused the DMK government of tapping his phone.