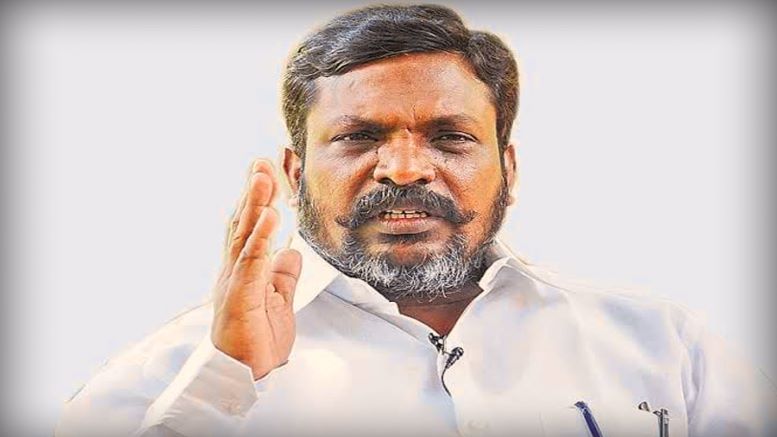 The powerful ‘Dalit’ political party of Tamil Nadu, Viduthalai Chiruthaigal Katchi (VCK), a staunch ally of ruling DMK, would conduct protest marches against the arrest of Popular Front of India (PFI) leaders by the National Investigating Agency (NIA) and Enforcement Directorate (ED), the party said in a statement.

VCK founder leader and Member of Parliament, Thol Thirumavalavan in a statement on Friday said that the Popular Front of India was a ‘transparent social movement’. The arrest of senior leaders of the PFI and the raids conducted at its offices across the country were ‘condemnable’ and his party would conduct protest marches against the action taken on PFI, he said.

The VCK leader said that ever since Narendra Modi assumed office as Prime Minister, there has been a move against the Popular Front of India (PFI). He said that PFI and its political arm Social Democratic Party of India (SDPI) were working for the ‘upliftment of the poor and downtrodden in society’.

VCK and its leadership is known for anti-Hindu hate speech and making secessionist demands. Most of the party’s top leadership are crypto-Christians i.e. practicing Christians who continue to cling on to their Hindu SC certificates in order to contest elections from reserved constituencies. It is yet another wonder of Indian ‘secular democracy’ that such an outfit is allowed to contest elections, leave alone operate publicly. Here are some examples of VCK’s political ideology and their (not so) hidden agenda –

DMK seems to be attracted to those wedded to secessionist, anti-Hindu ideologies. Notorious Catholic Priest ‘Father’ Jegath Gaspar Raj, who has close ties to DMK, has in the past instigated Muslims to demand a ‘separate electorate and sovereign land’. DMK’s own Hinduphobic MP A Raja threatened that the party would revive its demands for an ‘independent Tamil Nadu’ if not granted ‘greater autonomy’.

Incidentally, central agencies, including NIA and ED, conducted massive raids across 15 centres in the country against the PFI and arrested many functionaries of the organisation. PFI national chairman OMA Salam, its secretary, Nasarudin Elamaram, ideologue, Prof P. Koya, and founder leader, E. Abdurahman were all rounded up and the arrests were recorded. The arrested are taken to New Delhi for further investigation.

In Tamil Nadu, raids were conducted at 11 centres and 12 PFI leaders were arrested including national executive member, A.M. Ismail from Coimbatore.