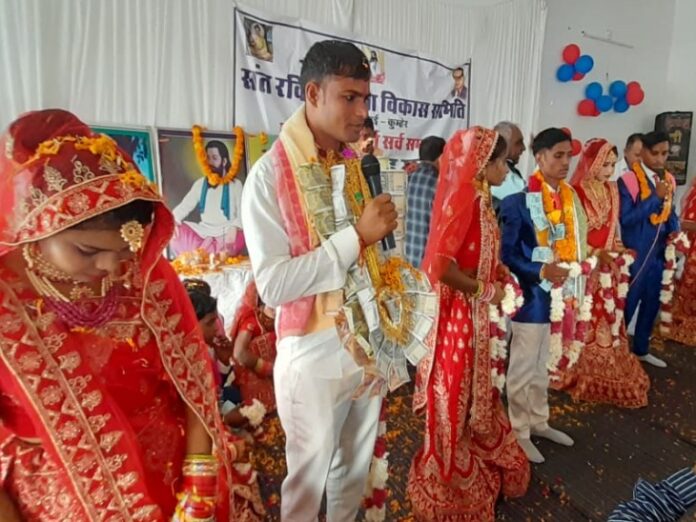 Hinduphobia characterises neo-Ambedkarism and it was proved once again during a mass wedding function organized in Rajasthan’s Bharatpur. 11 couples were administered the 22 vows of Ambedkar that are abusive and sacrilegious towards Hindu Dharma and Hindu Devis and Devatas. This comes close on the heels of the vows being administered in the presence of AAP (Aam Aadmi Party) leader Rajendra Pal Gautam.

On Sunday (November 20) a mass wedding event was organized in Bharatpur where the couples were first converted to Buddhism (neo-Buddhism/neo-Ambedkarism) and later administered an oath denigrating Hindu Bhagwans and traditions. The event was organized by Sant Ravidas Seva Samiti. This was the fifth event conducted by the Samiti in which 11 couples were wedded following which they were administered the 22 vows.

The event was conducted in a private marriage hall in Bharatpur District’s Kumher city. Officials from Deeg were also present on the occasion. Reports state after the officials left once the wedding rituals were concluded, the Hinduphobic oath was administered.

Self-styled social activist Shankar Lal Boudh informed the media that the mass wedding was intended to send out a ‘social message’. “People spend unnecessarily on weddings and we were able to conduct 11 weddings at a much lesser amount than people spend on a single wedding ceremony. People spend exorbitantly only because they want to show off. The mass wedding event intended to do away with such ostentatiousness,” he claimed.

He further said that the 22 vows were the ‘armour of Buddhism’. They are administered so that people don’t ‘exploit and adulterate Buddhism’ for their personal interests or gains. These vows are meant to maintain the ‘purity’ of Buddhism.

He also confirmed that Sant Ravidas Samiti organizes such events from time to time. Boudh said that the Samiti had organized a similar event in Alwar and this was the sixth ceremony they were conducting in Bharatpur. This ceremony was held under the leadership of Lalchand Paingoria who is the President and Chairman of the Samiti.

“Everyone participated in organizing the ceremony. There is no casteism here. We conduct weddings of every community. We are following the path of Sant Ravidas, Buddha and Ambedkar”, added Boudh. He also said they took 11000 rupees for registration so that participating youth understand the significance of the ceremony.

According to Boudh, couples receive gifts that are worth several times more than the registration fees. Couples are given fridges, chairs, clothes, vessels, and double beds among other things.

Vishwa Hindu Parishad (VHP) Bharatpur President Lakhan Singh said that this was a serious matter. He cited that officials from Kumher and Deeg were present at the event and once they left, the controversial vows were taken on a public platform. “This is wrong and threatens the unity of the nation. We strongly condemn this. As the President of the Vishwa Hindu Parishad, I appeal to the administration to take cognisance of the issue. If the administration fails then we will run a campaign and protest”, Singh said.

Bharatpur Bar Association President Yashwant Singh Faujdar called the oath controversial and illegal. He also pointed out that it was against the Hindu Marriage Act and Hindu Succession Act. “One’s religion cannot be changed like this and is against society. The wrong oath was administered. This is against Hindu deities and also unconstitutional”, he highlighted.

This is exactly what Veer Savarkar had warned Hindu society about in his article following Ambedkar’s conversion to Buddhism in which he introduced the 22 vows which were never a part of the Buddhist Deeksha.

“Even if there is no apparent threat to Hindu Rashtra at present, Hindu society needs to be vigilant regarding the rise of this type of Buddhism that is against Hindu Dharma,” Savarkar wrote. And his words are proving prescient. We now have Congress leaders like Pa Mallesh who cloak their Hindu-hatred as anti-Brahmanism and promote neo-Ambedkarism.

Interestingly, the organization carrying out this Hinduphobic mass marriage ceremony has named itself after Bhakti saint Ravidas who was a disciple of Vaishnava saint Swami Ramanandacharya. “Later in his life, he became a great follower of Lord Rama and started following some names like Ram, Raghunath, Raja Ram Chanda, Krishna, Hari, Gobind, and etc in order to express his feeling towards God”, notes Varanasi.org. Ironical, that the Samiti using his name should administer an oath denouncing Bhagwan Vishnu and other Hindu deities.