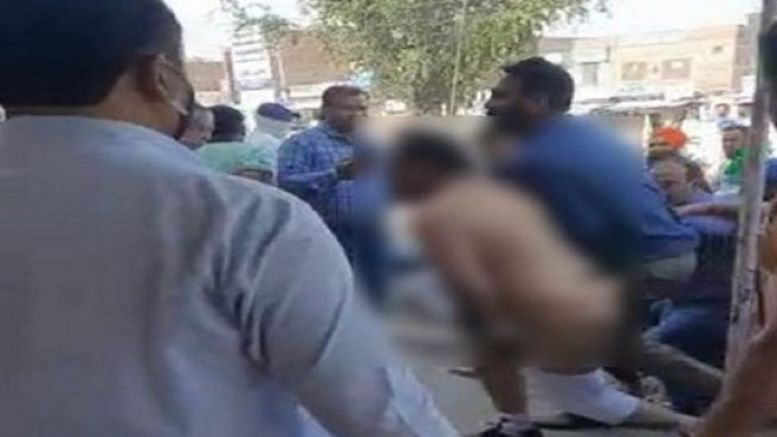 Farmer protests have now descended into unabated hooliganism with a Hindu MLA Arun Narang from Abohar being assaulted and his clothes being torn off by pro-Khalistanis right in front of the Punjab police who later escorted the MLA away. A viral video on social media (SM) shows the MLA being thrashed by hooligans before the police managed to take him away in a naked state.

As per available information, the incident took place at Punjab’s Malout town on Saturday when MLA Narang reached there to take part in a press conference against the state government. However, the so-called protestors were already waiting for him near the BJP office and blackened his car by throwing ink as soon as the MLA reached the spot.

What the hell is happening in Punjab? @capt_amarinder, a @BJP4India MLA was beaten n stripped by so-called ‘farmers’ while police looked on? If this happened in a @BJP4India state, imagine d uproar in media! But this is @INCIndia state, so all is quiet. pic.twitter.com/EmD3h7cJpo

Party workers and police managed to take him inside a nearby shop. However, the MLA was brutally assaulted and stripped naked after he came out while the police stood by as mute spectators doing nothing to prevent the attack.

“BJP’s Abohar MLA Arun Narang Ji along with two other party leaders were assaulted in Malout town. Attack on people’s representatives under a democratic state is a punishable and shameless offense. I demand strict action with immediate results.”

It is worth noting that the MLA who was attacked by pro-Khalistani farmers has himself been against the farm laws and has opined that the laws were anti-farmers. The MLA being assaulted despite his pro-farmer stance is proof enough of the fact that these so-called farmer protests have got nothing to do with the farm laws and there is a sinister Khalistani agenda at play in the name of farmer protests.

This isn’t the first instance of violence and hooliganism with Republic Day witnessing the height of lawlessness. In fact, there were also reports of female journalists being subjected to sexual harassment at protest sites. And even though Amarinder Singh has often been projected as a competent chief minister but this is just one of the many incidents that highlight he just keeps making a few statements every now and then but lacks the competence or will to rein in hooligans.