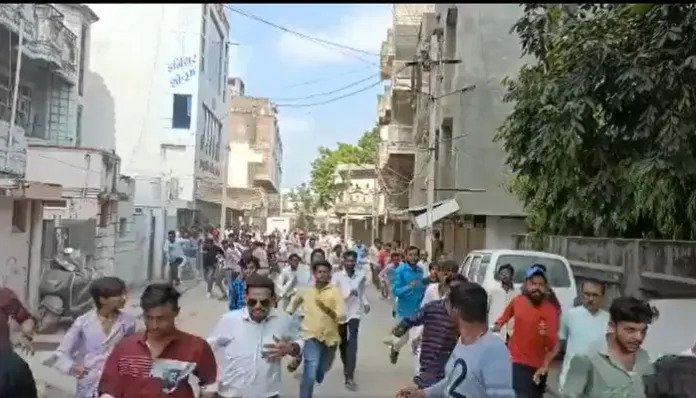 A protest rally was organized by Hindu organizations against love jihad, also known as grooming jihad, on September 3. The rally was held after a case came to light from Banaskantha, Gujarat where a girl and her mother were converted to Islam forcing her father to attempt suicide.

A report by DeshGujarat on the rally notes:

A Jan Aakrosh rally was organized by Hindu organizations along with the local BJP MLA in Deesa to protest against Love Jihad. Later, Shashikant Pandya, Gujarat MLA from the Deesa constituency, held a press conference regarding the recent case of love jihad and religious conversion.

MLA Shashikant Pandya said, “The whole Hindu community in a number of about 20-25 thousand people participate in the rally to protests against love jihad.”

He also said, “Abhi Toh Sirf Angdai hai, Aage Aur Ladai hai” meaning this is just the beginning, and the fight will go on. Muslim youth should stop brainwashing Hindu girls and sisters for religious conversion, otherwise, drastic results will follow, he added.

“Today I’m MLA, yesterday I was not the MLA still I was raising the voice and tomorrow also will keep the raising voice, no one can threaten the Hindu community.

Again I’m warning these people who in the name of dance classes brainwash girls of our community to do Love Jihad, and why does their community elder don’t stop them?” he asked.

“Gulf countries are financing these acts of Love Jihad but this is India, go to Pakistan and do such things because it won’t be allowed here. If they harass girls in colleges, schools, on pan parlours, etc. I am again warning them that the results will be drastic”, the local MLA concluded.

The protest rally was held in connection with a recent incident in which five Muslims from Rajpur, Deesa allegedly brainwashed a woman and her children to convert to Islam and forced the woman’s husband to attempt suicide.

The Gujarat Police on Sunday, booked five accused identified as Aijaz Shaikh, his father Mustafa Shaikh, uncles Alam Shaikh and Sattar Shaikh, and cousin Sohil Shaikh. The police have invoked, IPC section 306 (abetment to suicide), 506 (1) (criminal intimidation), 384 (extortion), 511 (punishment for attempting to commit offences punishable with life imprisonment) and 114 for an offence committed when abettor present, on the accused people. The Police are further investigating the case.

The accused were booked on the basis of a complaint filed by the brother of the victim. The complainant mentioned that his elder brother had attempted to commit suicide by consuming poison at Pataleshwar Mahadev Temple in Palanpur. The incident is said to have happened on August 27.

“A young girl in Deesa was lured into marriage by a Muslim named Ejaz Sheikh who reportedly converted the girl and her mother. The distressed father of the girl tried to commit suicide as a ransom of Rs 25 lakh was also demanded by the accused in the matter. As the incident came to light, there was anger among the people on this issue in the entire Deesa city”, noted OpIndia.

Reports also state that the police lathi-charged the protestors grievously injuring a youth in the process. The youth was admitted to a hospital for treatment. A video of the incident has also gone viral on social media. According to available information, the police resorted to lathi-charge as thousands gathered to protest. The bandh call was supported by all major organizations and traders of Deesa.