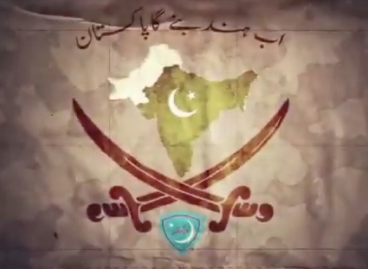 Islami Jamiat Taleba (IJT), one of the largest and most organised student organisations in Pakistan, has started a campaign called ‘Hind Banega Pakistan’ with the aim of conquering Bharat.

In a catchy promotional video launched by the group, Pakistani teenagers can be seen talking about their plans once Bharat has been annexed by Pakistan –

This is yet another brainwashed generation of Pakistani children dreaming of conquering India. Old chooran, same old delusions. pic.twitter.com/ACV2mZzfHP

“Allah-0-Akbar…Allah-o-Akbar..Allah-o-Akbar” the video ends with this chant, and a message is displayed for an Azadi-e-Kashmi Convention on 12th October at University Road, Karachi. The said convention on Saturday seems to have had a sizeable audience and was addressed by several senior figures, most with flowing white beards, going by the photos shared on IJT’s Facebook page.

The video shows the logo of Mass Media Production, a unit of IJT which claims to be ‘A media department , struggling for revival of Islamic Ideology in the field of media.’

Islami Jamiat Taleba (IJT) is the student wing of the Islamic fundamentalist Jamat-e-Islami (JI). Jamaat-e-Islami was founded in Lahore, British India in 1941 by the Deobandi Muslim scholar Maulana Abul Ala Maududi (born in Aurangabad, Maharashtra), who was influenced by the Sharia based reign of the fanatical Mughal Emperor Aurangzeb.

IJT has been one of the main ideological engines powering the concept of political Islam on Pakistan’s university and college campuses. IJT militias joined hands with the Pakistani Army to carry out the Bengali genocide of 1971, in which upto 3 millions Bengalis, mostly Hindus, were murdered. IJT is also believed to be behind the militarization of student politics in Pakistan, and has close ties to several Jihadis organizations.

All children featured in the video appear to belong to upper middle class families of Pakistan, and it once again underlines the Islamic radicalization of the entire Pakistan society, barring a few scattered, progressive thinkers in Karachi etc. who amount to zilch in Pakistani society. But the Pakophile elites in Bharat have spun a false narrative for decades that ‘ordinary Pakistanis and Indians are the same people, with similar outlook towards life’ and this wishful thinking has become the accepted wisdom in urban, middle-class Bharat.

This twitter thread shows multiple examples of how Islamic supremacist ideas and Hindu hatred has seeped into the masses of Pakistan, a country founded on the 2-nation theory that said ‘Hindus and Muslims are two different nations, with different epics, different heroes, and different episodes.’