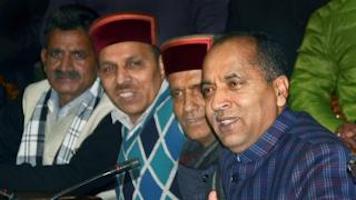 With Jai Ram Thakur being catapulted to the Chief Minister’s chair in Himachal Pradesh, a new chapter will start in the state’s history as this is the first time that an MLA from Mandi will occupy the CM’ s chair. Coming from a humble background, Jai Ram’s elevation to the top job happened because of the defeat of the party’s CM candidate P K Dhumal at the hustings.

But Jai Ram’s appointment as the CM had its share of drama & excitement with sporadic skirmishes & slogan raising between Dhumal & Jai Ram supporters in front of central observers Nirmala Sitaraman & Tomar, that stalled the announcement of Jai Ram’s candidature for a couple of days by the party High Command.

In his first press conference, the CM designate hinted at a mix of youth & experience in his cabinet & retiring the government officers & bureaucrats who had been given extension by the previous government.

The clean sweep by BJP in Mandi district where the party won 9 out the 10 seats on offer also ensured Jai Ram getting the top post. Mandi is sure to find two more cabinet berths apart from the CM, and one of them could be Anil Sharma, a Minister in Virbhadra’s cabinet who switched sides at the last moment.

But Sukh Ram’s son figures in the charge sheet submitted by the BJP against the then government to the Governor & it would be interesting to see how the CM designate handles this tricky situation.

The Sukh Ram factor in Mandi district cannot be overruled, and the father son alignment with the BJP certainly helped the latter in their quest for power in the State & prevented Congress even from winning one seat in the second most important district after Kangra.

Kangra again lived up to its tag of being the kingmaker district by electing 11 of the 15 MLAs for the victorious party, and is sure to be represented by at least 3 MLAs in the cabinet including former Ministers Kishan Kapoor & Ramesh Dwala who are Shanta loyalists.

Union Minister J P Nadda is sure to have a say in the formation of the ministry and his key associates are set to get important cabinet berths. However, major challenges await the young CM & his new government with the state’s debt burden touching a whopping 50,000 crore and a major part of its revenue being eaten up by servicing this huge debt .

The new CM & his cabinet colleagues will have to put their thinking caps on right from the word go and find ways to shore up the state’s finances apart from creating employment opportunities for the young. With 46% of the state’s debt to be repaid within the next 1 to 5 years (CAG report), the new CM & his team will have to do some out of the box thinking to bail out the state from its financial predicament.

However, Jai Ram can draw solace from the fact that he will have a friendly dispensation at the Centre willing to help him & Himachal.