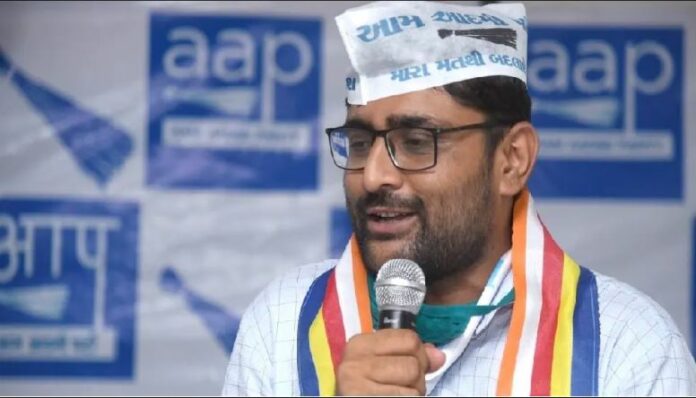 A video of Gujarat AAP President Gopal Italia surfaced on social media (SM) where he was seen abusing PM Modi using unparliamentary language. Unconfirmed reports say the video dates back to 2019 and was shot in the run-up to the general elections.

“Prime Minister Narendra Modi is a ‘neech’ person. I can’t confirm but I want to ask you, is there any former Prime Minister of the country who has done so many gimmicks while going to cast vote? This ‘neech’ type of person is doing road shows here. And he is showing how I am making this country C. You better understand the meaning of C. He talks about digital India and rushes to Gujarat from Delhi to cast vote. This is how he is making country C. So, this ‘neech’ type of person is giving a message to the country about how he is making this country C”, Italia is heard saying.

“Using such profanities and abusing Gujarat’s pride and son of the soil is an insult to every Gujarati, who has voted for him and the BJP for 27 years”, BJP IT Cell Head Amit Malviya tweeted. BJP media coordinator Yagnesh Dave came down heavily on Italia alleging that this showed AAP and Italia’s culture, “such a person does not have any right to live in India, who insults the Prime Minister of India,” Dave said.

The National Commission for Women (NCW) also took note of the video and issued a notice asking AAP’s Gujarat president to appear before the commission on October 13 for a personal hearing. The Commission in the notice stated, “The language used by Italia is language bias, misogynistic and extremely shameful, condemnable and unbecoming of you.”

Italia has a tainted past and has been accused of various unparliamentary acts such as impersonating a cop, threatening and hurling a shoe at a minister, and making PVC bombs to attack BJP among others. Italia has also been abusive towards Hindus and has often insulted Hindu deities.

In September this year, he had compared Bhagwan Krishna to ‘rakshas’ (demons). The Maldhari community, for whom Sri Krishna is the chief deity, was angered by Italia’s comment. “Shri Krishna is the nurturer for us and one of the central figures of Hinduism, so if you are not aware of this, please educate yourself. Since election season is here, you may go unhinged and say whatever comes to your mind, but the Maldhari community will not accept such an insult of Shri Krishna”, OpIndia quotes Maldhari leader Khilan Rabari as saying.

Italia’s deep-rooted hatred for Hindu Dharma was also seen when he termed Kathavachan and satsangs as useless things and a waste of time. “People are spending a lot of money and time on non-scientific and unnecessary things like Satyanarayan Katha, Bhagwad Katha and other such useless things. We don’t need those who clap like hijras in name of rituals and culture. Some Sadhu will speak nonsense from the stage and we have to clap like hijras?” he said mocking Hindu rituals.

Opposition leaders have often attacked PM Modi using derogatory language. Congress leader Mani Shankar Aiyar made the “neech aadmi” (low-born man)  remark during the Gujarat assembly election. One might recall Sonia Gandhi’s ‘maut ka saudagar’ jibe against Modi. The reason for such derogatory remarks isn’t just PM Modi’s humble background but the fact that opposition leaders view him as a Hindutva icon and the BJP as a representative of Hindu society.