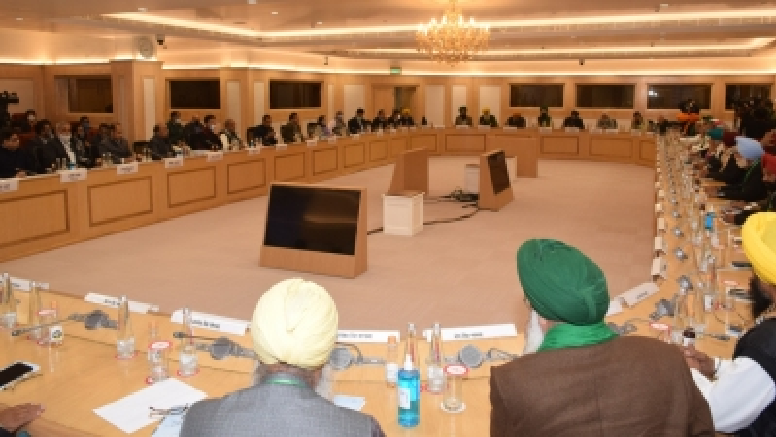 The eighth round of meeting between the farmers and the Union Ministers remained inconclusive as the farmers’ leaders refused to discuss the clauses of the three farm laws with the ministers.

Union Agriculture Minister Narendra Singh Tomar clearly said that the government won’t repeal the farm laws and if the farmers want they can seek legal intervention. Replying to this, the farmers’ leaders said that they won’t move the court rather want to resolve the issue through dialogue with the government.

During the three-hour long meeting, the farmers’ leaders were adamant on their demand to withdraw the three laws while the ministers negotiating on behalf of the government turned down the demand. Seeing that their demand was turned down, the farmers’ leaders even threatened to leave the meeting mid-way at one point of time, however, the meeting continued.

Farmers’ leaders said that if the government refuses to implement the three laws, then they are ready to end the movement with immediate effect. However, Tomar clearly said that we can amend the provisions on which the farmers’ have objections but the laws won’t be repealed.

Farmers’ leader Rishipal said that the Agriculture Minister said that the hearing on the matter related to farmers’ agitation is slated for January 11, so lets wait for that and then both the sides should agree to the decision. We have clearly told Union Minister that we won’t accept the court’s decision. Why didn’t any organisation out of 40 who are protesting have not gone to the court. Therefore, we have nothing to do with the court’s hearing and we will end the protest only when the laws are withdrawn.