Facing rising heat over his seditious speech, Harsh Mander flies to US 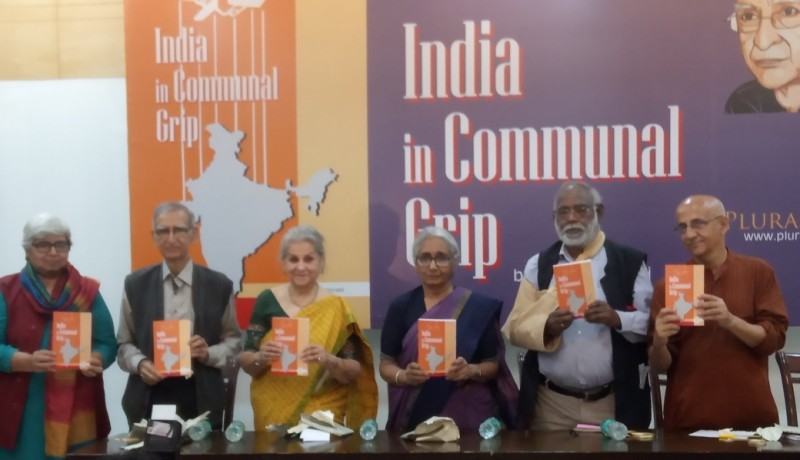 Congress ecosystem ‘activist’ Harsh Mander, in the dock for a seditious speech inciting mobs to disregard Parliament and Supreme Court and hit the streets against CAA, NPR and NRC, has overnight departed to US.

Mander has been in the thick of action over the last week, filing multiple petitions in Delhi HC and SC on behalf of Muslim victims of Delhi riots and demanding action against BJP leaders for ‘hate speech’. The dizzying flurry of legal activity undertaken by Mander, his daughter, and their legal counsels Colin Gonsalves and Karuna Nundy in Delhi HC & Supreme Court can be read in this report filed yesterday by HinduPost.

On Tuesday, a video clip showing Mander delivering a seditious speech outside Jamia Milia Islamia University Gate No. 7 on December 16, 2019 went viral. In the video, Mander can be heard saying –

“This fight (against CAA-NRC) will not be won in Supreme Court. We have seen the Supreme Court in recent times – in NRC matter, in Ayodhya matter, in Kashmir matter (abrogation of Article 370) – Supreme Court has failed to defend humanity, equality and secularism. Still, we will try there – it is our Supreme Court, but the decision will not happen in Parliament or Supreme Court. You, the youth will decide what kind of country you want to leave for your children. Where will this decision happen? It will happen on the streets…we all have now hit the streets.”

The full address made by Mander has been posted on the YouTube channel of his NGO Karwan e Mohabbat.

On 22 February, Mander again repeated his call for revolt against Parliament and courts over CAA-NPR-NRC and threatened ‘immense bloodshed’ while delivering the keynote address at a national conference on ‘Statelessness and the Right to Have Right’ in Kolkata.

On Wednesday, CJI Bobde was hearing Mander’s petition when the Govt. counsel SG Tushar Mehta stated that Mander, who has sought registering of FIRs against some BJP leaders for their alleged hate speeches that purportedly led to the violence in Delhi, himself had made objectionable remarks against the top court, the government and Parliament.

Taking strong note of this, SC not only refused to hear Mander’s counsel Karuna Nundy till the issue of his alleged seditious speech is sorted, but also kept his petition to itself while transferring other pleas related to the violence to the Delhi High Court.

Nundy asked the court to put off the hearing against him to a later day as ‘Mander is currently on a flight to the US’, but the court shot down this request and will hear the matter against Mander on Friday.

CJI Bobde also asked the Solicitor General to file an affidavit on ‘allegations’ against Mander.

In May last year, SC had come down heavily on Mander for seeking recusal of the then CJI Ranjan Gogoi from hearing his PIL against detention of illegal immigrants in Assam, saying it would not allow anybody to “browbeat” and “damage the institution”.

In another news, Delhi Police on Wednesday filed an affidavit in the Supreme Court against Harsh Mander and sought initiation of contempt proceedings against him for his derogatory remarks making insinuations against the apex court and its judges.

“It is submitted that I have come across a video clip showing Harsh Mander delivering a speech which is not only instigating the violence but is also seriously contemptuous as it makes derogatory remarks against the Supreme Court of India to a huge gathering of people,” said the six-page affidavit filed by Rajesh Deo, Deputy Commissioner of Delhi Police, Legal cell. Mander’s speech has been submitted to the court in a pen drive.

What action will be taken against Mander remains to be seen, as the entire might of the high-powered Congress ecosystem lawyers like Kapil Sibal, Indira Jaising, Rajeev Dhawan, Dushyant Dave etc and foreign-funded Lutyens’ NGOs can be expected to intervene and plead on his behalf.

The Lutyens’ lobby knows that if Mander is punished, as he should be given the clear evidence against him and the recurring nature of his seditious speeches, that might signal the end of the immunity they have enjoyed all these years despite brazen misuse of free speech, while the common man and Hindu leaders are hauled over the coals for anything and everything.

In all this din, we must also not forget that there was nothing ‘hateful’ in what Kapil Mishra said on 23rd February. If the courts act against Mander, we are sure to see hysteric appeals for similar action against Mishra and other BJP leaders in the coming day.

Seeing another Shaheen Bagh being created in his city, which would block an arterial road for residents of Trans-Yamuna area of NE Delhi, Kapil Mishra merely asked police to clear the blockade else people like him would have to hit the streets too. Mishra’s words in fact are a direct indictment of the state and courts’ inability to clear the Shaheen Bagh blockade, and worse still, emboldening anarchists by appointing mediators to smooth-talk protestors into shifting.

And while we can only hope that Harsh Mander is held accountable for his actions, the larger question remains as to why our bureaucracy (Mander is an ex-IAS) and civil society continues producing such people who clearly hate the majority population and democratic institutions?