Exploitation of a low and base type – over the dead 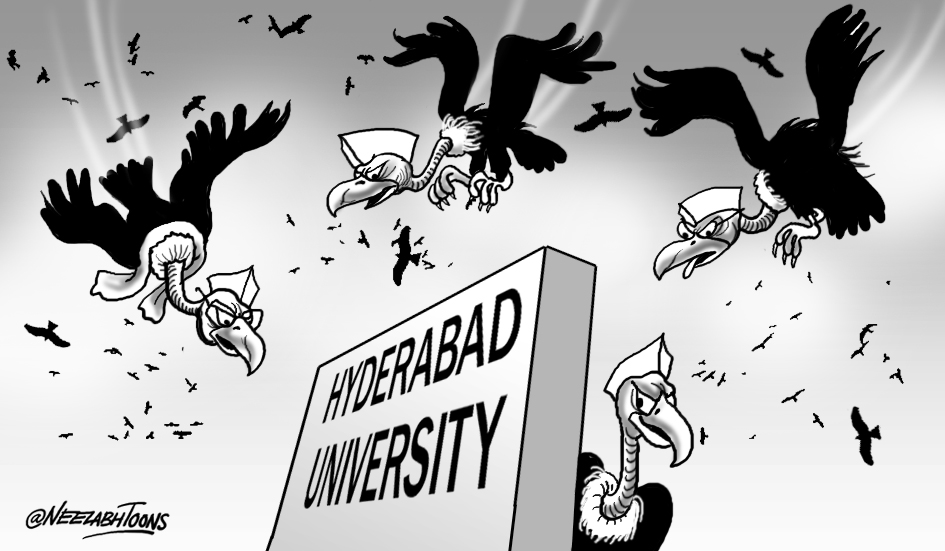 Exploitation is of many types. Reading the print media and watching the TV channels I get the impression that Rohith Vemula’s suicide has been exploited to the maximum and taken to a never before seen low level by the Opposition. The latest to join this exploitation bandwagon are Nitish Kumar and Lalu Prasad Yadav. Coming to think of it, was Rohith Vemula the first suicide in a university? And why is there so much of fire and fury against this suicide? It is not difficult to gauge. Can I believe that these political leaders are really weeping over the suicide of one SC student? If their feelings are genuine, why are they silent on recent murders of SCs like 60 year old Hardeva and 17 year old Sawan Rathod?

Having nothing substantial to hit at Modi’s government, they now pick up this suicide case. Even then there are many factors surrounding the case which are not properly explained. For one, his father has in no unclear terms stated that he is not an SC. His mother got a false certificate – at the instance of his foster grandmother. This usually happens. As one who was in the field of education, I know many cases where the students of upper castes had secured SC certificates to get admission and all the benefits that are tagged to the positive discrimination policy. Even converted Christians easily obtain the SC certificates and on that basis claim bank jobs etc. Now when Rohith’s father has stated that he is not an SC, why have the Opposition parties insisted that he is? And they made a case out of it stating that ‘now they want to deny him his identity’. Are these political leaders more authentic than his father in identifying his caste?

Many unanswered questions over Rohith’s suicide

Why had Rohith committed suicide? Why was his suicide note simply brushed aside? And why was no attempt made to revive him? Are there any other factors that pushed him to take such a drastic action? Why were these not probed? There have been many cases of suicides committed in Chennai IIT and in other higher education institutions by SCs. But there were other factors – not merely social but psychological and educational. Was Rohith able to cope with his studies? What were his psychological abrasions? Was he not disturbed right from his teens that his mother was made to work as a servant in her foster house? Was he not a victim and a witness to domestic violence? Did these affect him and disturb his studies? Why was he hanging on in the University without completing his research? What was his friends’ influence on him? These and more should be not only probed but are factors that could have aggravated his decision. How can the political parties led by Rahul Gandhi categorically state that the Modi government is responsible? How has this responsibility and indictment been legalized? Why is Rohith now being exploited by political parties for their votes? How can they be so senseless and shameless in using it as a vote catching strategy? It seems to have become the fashion for professors and writers to speak against the establishment. But to sieve through and to look into the reasons and to stand up and remind the larger body of the real causes is what professors must aim at.

It seems to me that there is a concerted effort to politically finish Smirti Irani. She has a powerful personality and is courageous, which the Opposition, and especially Rahul Gandhi cannot stand. The Opposition parties always like a weak government like the UPA and the former PM-Manmohan Singh who they found malleable to their whims and fancies. Now they are using this suicide episode to hit at Smriti Irani. What strikes me is if the SCs are so helpless and backward and are discriminated against, what were the political parties today crying on their behalf doing all these years when they were in power? It is now 60 years since we gained independence, and one hears all of them, especially the Congress, wax eloquent on the poverty and the discrimination against the SCs. What is their score card report on this? How were they able to alleviate this? If things are so bad then one should blame the Congress and its allies for the present state of affairs. Instead they go on hitting Modi’s government because they want the same state of misery to continue. There is power for them in keeping them backward, oppressed and discriminated.

Forget about the Smirits. Who, for example, are hitting out against the SCs in Tamil Nadu? It is not Brahmins or other upper castes but a BC Vanniar outfit. This outfit has banned intermarriages with the SCs and even clashed with them. Why was there no out cry by the champions of equality? Mayawati – the less said about her the better. Look at her amassed wealth – using the tag of an SC, she has stayed in the upper echelons of power. She continues to use them for her own power anchorage. I demand that these SC leaders stop exploiting the SCs for their own power. But the positive discrimination attached to the SC tags like admissions, subsidies etc. are being used by even the well off. Even former President Mr. Narayanan’s daughter used the SC tag to get her job in an airlines. One suicide and all hell broke loose, but for 50 years and more the SCs were exploited by their so called guardians, and today they have no hesitation to use the death of an alleged SC student for garnering votes. Is that not base and shameful? This is one base low level exploitation of the SCs.