The Ever changing U.P. Electoral Matrix 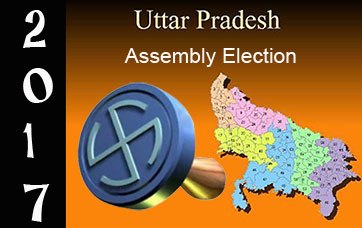 As we stand half way through the U.P. elections, we are treated to a triangular battle and the mercurial nature of voters. The initial trend, in which the BJP was not even in the race and was adjudged the no. 3 party, has overturned to a large extent. Whereas the BSP, which was pretty much in the mix to begin with, is now panting due to the lack of “plus” votes apart from that of the Dalits. Even the Muslim vote has gone to Behen ji only at places where the BSP candidates have a stronghold.

Most amusingly, the SP-Congress coalition which was predicted to cross the line with ease has some serious issues to tackle to redeem its past glory.

So when did the tables turn? It seems that that the internal brawl of the SP has cost it a bit too much. Dreading the loss of the “cycle symbol” in the Election Commission, to prevent himself from drowning Akhilesh Yadav caught hold of the “palm”, but much to his surprise it is the weight of the palm which is causing him some serious issues in the present elections. 105 seats were certainly a bit too much for the Congress. The result  is that now, it is almost intangible to make out who is saving whom in SP-Congress coalition. The only purpose that the coalition has served is that of polarizing the Muslim votes, much to the anguish of the BJP.

The social engineering of Amit Shah has started to pay off. The core vote of the BJP of the upper caste and traders is intact inspite of demonetization, which doesn’t seem to be that big an issue on the ground in the U.P. elections. No Modi wave as that of 2014 is evident, but he remains the face of the party and the BJP is garnering votes in his name. After 1991 and 2014, it is in this election that the BJP seems successful in attracting the non-Yadav OBC voters.

Shah’s electoral gatherings and road shows are attracting unprecedented crowds, which is a symbol of the BJP increasing its vote base.The recent results in the Odisha and Maharashtra local body elections, which are highly skewed in BJP’s favour, may just act as a fuel for their remaining campaign.

The people who are comparing the SP-Congress combination to the “Bihar Maha gatbandhan” should be mindful of the fact that both Nitish Kumar and Lalu Yadav are leaders with a strong vote base whereas the Rahul Gandhi led Congress is empty pocketed in U.P. For the coalition to shine, it is mandatory for the Congress to increase its strike rate, otherwise at present the picture looks grim for them.

The election campaign that began with development as the sole agenda has come to a standstill on the note of Gujarat’s donkeys and other rhetoric. However, it is almost impossible to predict the whims of the state with a population of around 20 crore, but don’t be surprised if the ultimate outcome is a hung assembly on the 11th of March.