Dr. Shyama Prasad Mukherjee- A True Titan Who Never Got His Due 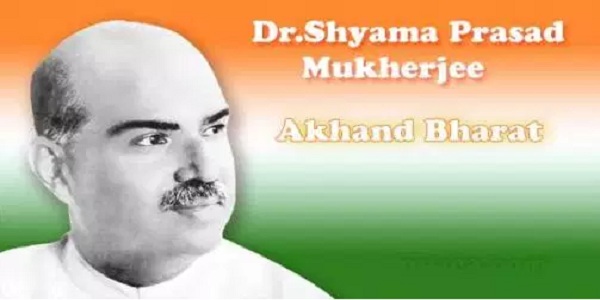 ‘To have lived long does not necessarily imply the gathering of much wisdom and experience.’ This was the advice given to Shyama Prasad Mukherjee by his father Ashutosh Mukherjee, a former High Court Judge and later VC of Kolkata University. And he truly lived by that dictum.

Today is the birth anniversary of Dr. Shyama Prasad Mukherjee, a true titan who unfortunately never got his due from a Leftist establishment and by historians. Instead, he has been portrayed as a rabble rousing communal bigot. This is unfortunate as he was the one,

Coming from quite an illustrious background, Shyama Prasad Mukherjee inherited a tradition of scholarship and nationalism from his father. He graduated from University of Calcutta in 1921 and later did his masters from the same institution in English. He also completed his masters in Bengali at the insistence of his father, who felt that vernacular languages should also be given importance.

He had an early blow when he was just 23, with his father passing away in 1924, at Patna. In his own words, “all the joy disappeared from my life.“

In 1926, Shyama Prasad left to London, to study for the Bar and enrolled at Lincoln’s Inn. He worked for some time with Kolkata High Court on return, and even practiced there.

Shyama Prasad again had to suffer another personal loss, when his wife Sudha passed away, leaving his 4 children in his care. Fortunately his sister in law, Tara Debi, took good care of his children, bringing them up as her own.

As Vice Chancellor of Kolkata University

It was during his tenure that Rabindranath Tagore addressed a convocation in 1937 for the first time. He was also a member of council for IISC.

What Dr. Shyama Prasad Mukherjee did for Kolkata University as Vice Chancellor is invaluable. He laid down the rules, bought in new departments, upgraded the syllabus. It is better to say that what the University is now, is due to the foundation laid by him.

It was after he finished his term as Vice Chancellor of Kolkata University, that he entered into active politics, joining the Congress party and entering the Legislative Council in Bengal.

However, he had a very stormy tenure, with the government restricting his movements and not allowing him to speak. Even worse, he was stopped from visiting Midnapore district, in 1924, after it was hit by heavy floods.

He resigned in protest and mobilized relief along with the Ramakrishna Mission, Mahabodhi Society. In 1946, he was once again elected as an Independent candidate, and later to the Constituent Assembly.

On a side note Dr. Shyama Prasad was an active member of the Mahabodhi Society, served as it’s president. He managed to bring back the relics of Sariputta and Maudgalayana, two of Buddha’s disciples from the British museum which he later placed in the Sanchi Stupa.

He also founded an English daily, The Nationalist. He played a crucial role in guiding students protesting against the government, on observing I.N.A Day in 1945. He was elected to Bengal Legislative Assembly in 1946.

His resignation from the Union Cabinet in 1950 was over the Nehru-Liaqat Ali Pact, to which he was strongly opposed. It was due to the widespread massacres against Hindus in Eastern Pakistan, that in turn led to huge waves of migration into Kolkata and Bengal. Around 50 lakh Hindus left their homes in Eastern Pakistan, and fled to Bharat. When he called for strong action against Pakistan, Nehru instead went ahead and signed a pact with Liaqat Ali, the Prime Minister of Pakistan.

Terming this a gross act of appeasement, he resigned from the cabinet, again, becoming the first ever to do so in independent Bharat. He, then, devoted his life to the RSS and resettlement of the refugees.

As RSS pracharak, he worked extensively in Lakhimpur district of Assam. The Bharatiya Jan Sangh, was founded by him in October, 1951 after due consultation with Guru Golwalkar, the then RSS head.

In 1952, the Jan Sangh won 3 seats in the Lok Sabha elections, with Shyama Prasad Mukherjee himself winning from Kolkata South defeating both the Congress and Left candidates.

Along with other opposition members in Parliament he founded a National Democratic Party, that would be the core opposition to Nehru, though not officially recognized. As an opposition leader, he firmly believed in individual liberty and freedom of expression.

He opposed the amendment to Bharat’s Constitution, putting restrictions on freedom of expression and also detention without trial. He also laid down the basic ideology of the Jan Sangh, that have formed the foundation for BJP too, in a way.

The main ideological points of Jan Sangh which were laid down by Shyama Prasad Mukherjee were:

Travel to Kashmir, arrest and death

In 1953, he planned to travel to Jammu in solidarity with the protests by the Praja Parishad there, which was demanding full integration of Jammu and Kashmir with Bharat’s Union.

However, as per Kashmir’s special status then, Bharat’s citizens could not legally enter the state, unless they had prior permission and they had to carry their ID cards. The Prime Minister of Kashmir had full powers to decide who could or could not enter the state.

His reference was to the fact that Kashmir had it’s own emblem, own status, own Constitution.

He entered Kashmir illegally in May 1953 protesting against the law, which demanded special permission to visit it as well as ID cards. Arrested on May 11, 1953, when he crossed the border into Kashmir, along with Guru Dutt Vaid and Tekchand Sharma, he was put into prison. Later all of them were transferred to a cottage outside the city, where his condition started deteriorating. On 19th June, 1953, he was suddenly diagnosed with “dry pleurisy and coronary troubles”.

However, his health deteriorated even more and around 2:25AM, June 23, 1953 he was pronounced dead due to a “heart attack”. However there are just too many murky circumstances surrounding his death.

Why did the doctor Ali Mohammed, prescribed a streptomycin injection to Shyama Prasad Mukherjee inspite of the latter informing him that it was not suitable to his system? why were false assurances given?

When Shyama Prasad Mukherjee was shifted to hospital why was there only one nurse Rajdulari Tikoo to take care of him, why was he not given proper medical care, knowing his condition?

Thus, if one looks at the events leading to his death, his arrest, the willful negligence, it just does not look like a natural death at all.

Though there was a demand for an enquiry into his death, it was rejected by Nehru, who said he found nothing mysterious about it. This, in spite of his own mother Jogamaya Devi leading the requests for an enquiry.

Dr. Shyama Prasad Mukherjee was the finest thinkers among the Jan Sangh. He had an absolute clarity of thought, no beating around the bush and no wholly headed thinking. Today, if Bharatiyas are able to enter Kashmir without showing an ID card, it is due to him.

Dr. Shyama Prasad Mukherjee died a martyr for the cause of Bharat, for demanding, that no independent sovereign nation could have more than one PM or more than one constitution. Today when you enter Kashmir, like any other state in Bharat, remember it was due to his efforts. He was a man who stood up for individual rights, demanded a Uniform Civil Code and built up Kolkata University to what it is today. Be it as Vice Chancellor of Kolkata University, as Minister or as founder of Jan Sangh, his contribution has been immense. Unfortunately the Leftist academia has branded him as a bigot, downplayed his contribution.

On his birth anniversary, lets pay homage to Dr. Shyama Prasad Mukherjee – A thinker, an academician, a freedom fighter, a scholar, who unfortunately never got his due.

(This article has been collated from the tweets of @GabbarSanghi)