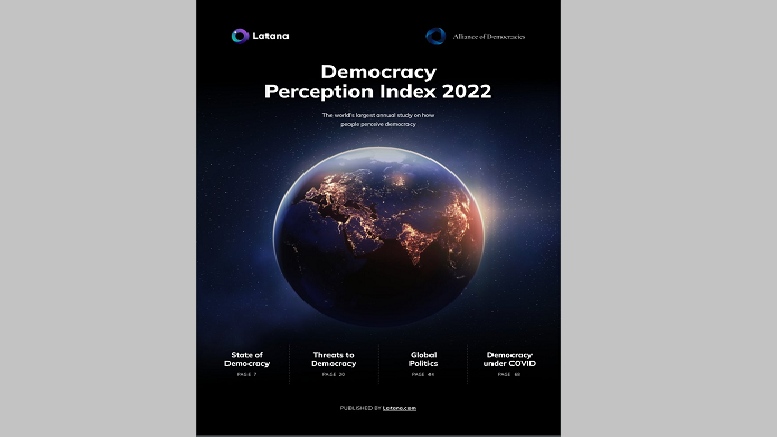 Every year, this is by far the most interesting study on democracy because it doesn’t rely on the opinion of “experts” but on people’s actual perceptions. As such the results are often surprising and it raises profound questions of what democracy actually is.

It is commissioned by “The Alliance of Democracies Foundation”, founded by Anders Fogh Rasmussen, the former NATO Secretary General and former Prime Minister of Denmark. In other words, if it has any bias, it is a Western liberal bias.

So which country in the world perceives itself as most democratic? Answer: China! I told you the results would surprise most!

Here is the full list of countries’ “perceived democratic deficit”, in other words the difference between how important people say democracy is and how democratic they think their country is. The top 5 countries are: China, Switzerland, Vietnam, India and Norway.

A big part of the answer behind these results is probably whether the government is perceived as serving a minority of citizens or the majority.

Also surely matters is that only 5% of people in China think that not everyone has equal rights in the country, the second lowest score in the world (after Vietnam). The extreme degree of accountability for top officials and billionaires probably plays a role in this perception.

Conversely, the relatively low score of the U.S. might be explained by the perception that corporations have an undue influence on the government. It has the highest score under that metric. Americans also largely believe the government mainly acts in the interest of a minority.

Another clue that might explain the China score is that while a majority of countries say poverty reduction should be their government’s top priority, this isn’t the case in China. Why? Because China did focus on that and reduced poverty. In other words, it did what people wanted

The big paradox of course is that while the Chinese perceive themselves as a very democratic country and less than half of Americans see their own country as democratic, many more people around the world have a positive impression of the US than of China.

This might be due to a difference in the perceived importance of elections. To the Western world, elections are seen as hugely important (82% in the US) while they’re seen as much less important in China (54%)

Not that the Chinese believe they don’t have free and fair elections (only 5% say they don’t vs 31% in the U.S.), they just don’t seem to believe elections are the alpha and omega of democracy.

But of course in the rest of the world, there is widespread belief that elections are largely what defines democracy and that China doesn’t have elections at all (which is false). This undoubtedly contributes to the negative impression of the country.

To continue with the paradoxes, while a majority of Americans do not see their own country as democratic, they still believe the U.S. has a net positive impact on democracy worldwide (55% say so). Go figure… China (and Russia) obviously totally disagree with that.

All in all this report raises profound questions: is a democracy simply defined by elections or is it more than that? Obviously not: if we take France, my country, a large majority believes there are free and fair elections but a majority also do not see France as a democracy.

This is another paradox by the way. Ask any person in France what democracy is and they’ll reply “elections”. This shows that at a deeper level they understand there is more to democracy than the simple act of voting. They’re just not educated to formulate democracy differently.

And all studies point to the fact that, in the U.S. in particular, the government doesn’t act “for the people”. For instance, this very significant 2014 Princeton study concluded that what average citizens want has “little or no influence” on U.S. policy

(This article has been compiled from the tweet thread of RnaudBertrand.)