Delhi Declaration, Troika Plus and its aftermath 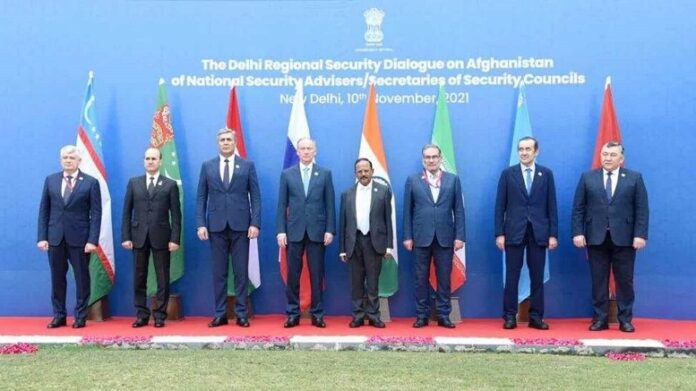 The Delhi declaration by eight nations that Afghan territory shouldn’t be used for sheltering, training, planning or financing terrorist activities and also emphasising the need to respect the territorial integrity and sovereignty of Afghanistan assumes significance as it aims to scuttle the nefarious designs of Pakistan to rule Afghanistan by proxy with the backing of China.

Russia and Iran are important players in the security dialogue and getting them on board lends weightage and credence to the declaration given the size and influence the two countries wield in the region. The presence of the five Central Asian republic’s all of whom border Afghanistan is a major achievement for Bharat which has a lot at stake in Afghanistan apart from the 3 billion dollars of investments in that country.

China as expected eased its way out of the NSAs (National security advisors) meeting citing “scheduling reasons” even as it confirmed its participation in the “Troika Plus” meeting attended  by senior diplomats of US, Russia, Pakistan in Islamabad on Thursday which is an attempt by Pakistan to throw a spanner in Bharat’s continued attempt to play a constructive role in shaping the future of  Afghanistan.

Islamabad chairing the “Troika Plus” called upon the US to defreeze the Central bank accounts of Afghanistan and extend economic aid to the Taliban lead government so that it can have a hand in the pie as much of the money will be routed through Pakistan if and when it happens.

Pakistan and China are waiting to milk Afghanistan by exploiting its rich resources and that can only happen when the Taliban government with its pro Pakistan leaning are firmly in the saddle as they appear to be currently.

China through its much famed debt diplomacy will dangle a carrot in front of the Taliban regime which are sure to take the bait given the cash crunch they are facing. This will give China access to the vast mineral wealth of the war torn country and also a strong foothold in Afghanistan to pursue its expansionist agenda under Xi jinping like the CPEC (China Pakistan  Economic Corridor) and the OBOR (One Belt One Road).

China has many countries like Sri Lanka, Pakistan, Maldives, Tajikistan, Mongolia and half a dozen African countries like Ethiopia, Kenya Angola, Republic of  Congo and Uganda entangled in its debt web and Afghanistan could be the latest to fall in it’s trap.

It is here that Bharat has to use it’s leverage and influence with countries like America, France and Great Britain to keep the Taliban regime on a leash. The US can be convinced to route humanitarian  and economic aid through Bharat so that it is not swindled and reaches the public of Afghanistan while keeping the Taliban  regime  in the loop.

America is the only country which can use it’s influence and military might if the need arises to make the Taliban government act in accordance with the international order so that instability does not return to the region and Bharat should continue to use its good offices to make the Biden administration keep a close tab on Afghanistan and  act in a manner which keeps the Taliban regime not run amock.

Moreover, China cannot be allowed to pursue its devious hegemonistic designs in Afghanistan in cahoots with its close ally Pakistan and the US should be continuously made aware of this stark reality lest it forgets its role in the region after it’s sudden exit from Afghanistan in August.

S Jaishankar’s meeting  with the US congress delegation headed by senator John Cornyn which comes close on the heels of the US deputy secretary of state Wendy Sherman’s visit to Delhi to discuss the Afghan situation and China’s belligerence in the Indo pacific are a step in the right direction.

But Bharat has its work cut out as it has two formidable  foes one piggybacking  on the other breathing down its neck and incessantly  trying to create tensions on its borders. Thus, apart from upping the diplomatic ante Bharat has to keep a constant vigil on the LAC and LOC  to keep both China and Pakistan  at bay as they will leave no stone unturned to turn the heat on Bharat.