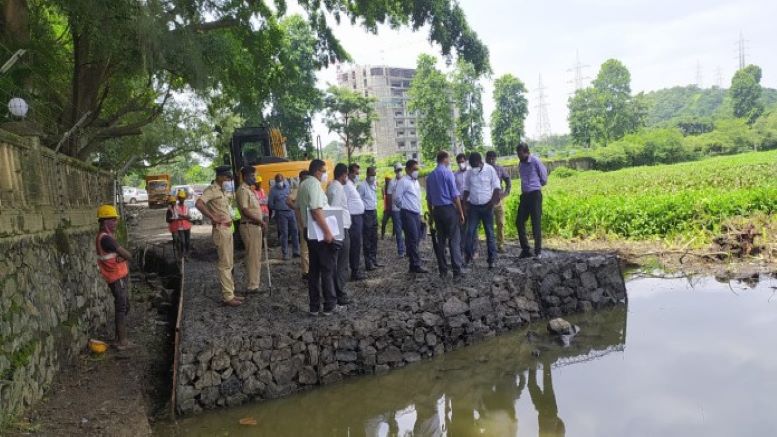 The cycle track project initiated by the BMC (Brihanmumbai Mahanagar Palika) at the instance of ‘environmentalist’ Aditya Thackeray is damaging the fragile Powai Lake ecology.

Environmental group complaints against the project

Sahyadri Rights Forum has approached the National Green Tribunal (NGT) to get the project stalled on the basis of a complaint received from a student of IIT Powai. They have requested the chairman to order a thorough investigation of the environmental damage caused to the Powai Lake due to the project.

The letter addressed to the NGT Chairman brings forth the point that environmental laws are being disregarded by MCGM (Municipal Corporation of Greater Mumbai) that has undertaken the construction of a dedicated cycle track on Powai Lake.

This isn’t just a breach of environmental laws but also a blatant violation of Bombay High Court orders on protecting Mumbai’s green belt and wetlands. The letter further points out that the construction activities have been undertaken without the necessary environmental clearances.

Highlighting the violations in the project, the group writes that the said construction has been carried out by reclaiming Powai Lake using mesh-wired stones. Additionally, several trees have also been chopped down for the project. Therefore, the project is causing great environmental damage and endangering marine life and those species dwelling on trees.

It is worth pointing out that the cycle track project is ‘environmentalist’ Aditya Thackeray’s pet project who incidentally also happens to be Maharashtra’s environment minister. This is one of Mumbai’s biggest projects both monetarily as well as on the basis of the length it will cover. One of the proposed cycle tracks is to be constructed around Powai Lake.

However, it has now come to the fore that no feasibility study was undertaken before the project went on the floor, a point that has repeatedly been raised by opponents including residents, IIT-B students, environmentalists, and cyclists in addition to the opposition parties.

This project will harm not just tree-dwelling species of the area but also the marine life of the lake which includes marsh crocodiles. Environmentalists have also said that no Environment Impact Assessment (EIA) was conducted before the project was started.

Similarly, it appears that BMC’s own regulations have been flouted only because the project happens to be a pet project of environment minister Aditya Thackeray. As per the Civic Development Control Regulations, no construction activity can take place within 100 meters of the Powai Lake boundary.

One of the environmentalists who visited the site also pointed out that 162 trees have been earmarked for being chopped to make way for the project. Remember the hullabaloo created by Sena and Aditya Thackeray with regard to the Aarey Metro Shed project claiming ‘environmental concerns’?

The two-faced stance of Sena shouldn’t come as a surprise considering Hindupost had exposed their ‘love’ for the environment earlier.

The hypocrisy of the ruling Shiv Sena is also nothing new. While it stalled the Aarey metro shed project as it was concerned with the environmental impact of cutting down trees, it was more than happy to allow 300 trees to be axed for the construction of a metro line, the elevated Metro-2A corridor between Dahisar and DN Nagar.

Then again, the environmental concerns of Shiv Sena in general and Aditya Thackeray in particular, went into hibernation while the Aurangabad Municipal Corporation was asked by the Sena to chop down 1000 trees for the construction of the Bal Thackeray Memorial in Priyadarshini Park.

The BMC on its part has stated that they have taken all aspects into consideration before initiating the project. BMC’s additional municipal commissioner (projects) said that they are raising an ‘eco-friendly’ structure and that international experiences were considered before finalizing the engineering options.

With opposition coming from various quarters, the Union Environment Ministry has stepped in and demanded the Maharashtra environment department’s response in relation to the project.

An Indian Express report on the issue says:

The Union Environment Ministry has sought a response from the state environment department over the Brihanmumbai Municipal Corporation’s proposal to landfill parts of Powai Lake to create a cycle track. Environmentalists had earlier raised concerns over the project.

Parts of Powai Lake were reclaimed earlier for widening the Jogeshwari Vikhroli link road. The BMC has now proposed a cycling track around the lake as part of its plan to have cycling tracks around the city.