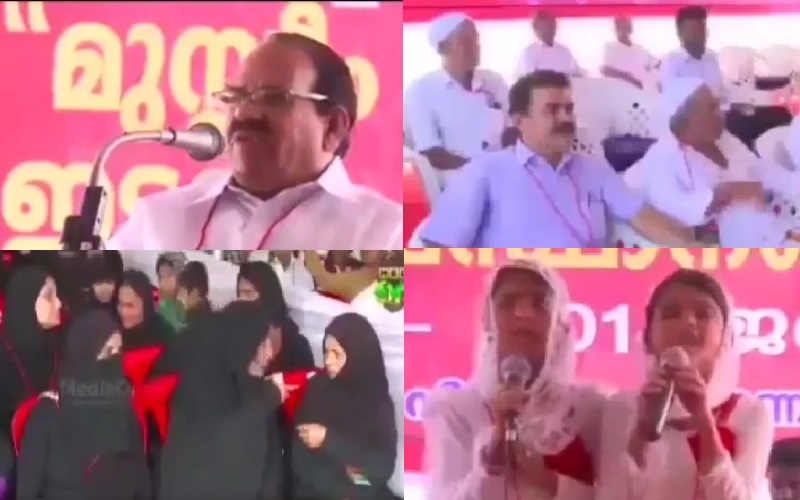 Comrades attended a Communist Party of India (Marxist) (CPM) party meet at the Muslim-dominated Kasargod district in Kerala, last month. This was their second Sharia-compliant gathering after Kannur. Muslims account for at least 40% of the population in both these districts, if not more.

Men & women sat separately and were segregated using curtains. Revolutionary songs were missing but Muslim songs made up for that loss. Special care was taken to provide all and sundry with namaz facilities. The arrangements would have made even the Taliban proud, should they approve songs and women.

The presence of women was widely publicized by both left and Muslim-leaning media. Seminars were arranged where namaz carpets and Pardhas were distributed among those who showed up. Special biriyanis were prepared for lunch.

The usual spiel on Muslim ‘contribution’ to the freedom struggle was discussed aplenty. As usual, they tried to whitewash terrorists who partook in the Malabar genocide. The tainted CPM politburo member Kodiyeri Balakrishnan (whose son remains jailed in Bengaluru for drug running) inaugurated the event.

On the outside, the CPM hates religion and regionalism but is now happily mingling with Muslim sectarianism. The party now stands politically bankrupt and has seemingly abandoned all its Marxist ideologies. Or maybe their Marxism is reserved for Hindus, and they have bowed before the more intolerant creed of Islamism  Can one imagine a Communist party meet where bhajan-kirtan is done for assembled Hindus?

The CPMs Hindu vote base has eroded considerably with OBCs and SCs shunning them since they started recruiting menstruating-age women ‘activists’ to storm the Sabarimala temple. Pinarayi Vijayan hopes to scare Hindus using Kerala’s demographic changes. He is being helped by an increasing influence of hardcore Muslim political parties in the state, led by the Popular Front of India.

Communists plan to compensate for the loss of devout Hindus by wooing Christians and Muslims. But these days, even Christians are speaking up against the predatory and intimidatory tactics employed by the halal mafia and grooming jihadis.

Vijayan used devious means to attract the ailing Kerala Congress (Mani) which in turn has the support of a section of the Christian community. He also met bishops and guaranteed them that his government will not implement the Church Act. Certain sections of Christian devotees want some administrative control over their places of worship. Vijayan’s assurances meant that churches will not be audited by the state government.

In fact, local Marxists are experts at using loopholes provided by the current constitution. Their secular credentials can be gauged from the fact that Marxist chief EMS Namboodiripad carved Muslim-majority Malappuram out of Palakkad and Kozhikode when he was the Chief Minister in 1969. Ironically, Namboodiripad himself had to abandon his home when his ancestral place was attacked by Islamists way back in 1921 as part of the Moplah genocide.

In 1969, it was a reward with the Muslim League’s political support for the communist regime. The new district consisted of the same talukas that in 1921 had seen widespread Hindu genocide. The newly formed district of Malappuram was called the illicit child of the two-nation theory.

Over the past four decades, Kerala’s Hindu population has been dipping while Muslim numbers climb unchecked. So-called national leaders of the CPM are noticeable only by their irrelevance. They are busy accompanying Rahul Gandhi and other opposition leaders as luggage.

The CPM is readying a new political face but it is disturbing, especially for Hindus.