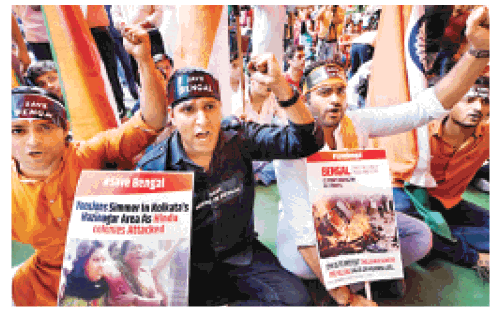 Akhlaq, Junaid and Kartik Chandra Ghosh, all three have fallen prey to crowd violence recently. Today, everyone knows about Akhlaq and Junaid and they are being talked about all over the country. Protests against their murders are being carried out everywhere- from social media to the streets. Several awards were also returned for this cause. Bharat started appearing ‘unsafe’ to some renowned people of the country, but who is this Ghosh? Do those who are in opposition to the claimed ‘intolerance’ even know the name of Kartik Chandra Ghosh? Why did a violent mob lynch Kartik Chandra Ghosh?

The answer to this question lies in that environment of West Bengal which has grown completely venomous due to the pseudo secularism of the day. The spot of the mishap is around 10 to 12 kms away from the Bangladesh border and is called Baduria-Basirhat and the population here constitutes 60 to 70% Muslims. This barbarity was carried out after the Facebook post of a 17-year-old school student in which he had made an ‘offensive’ remark about a pious Islamic place. After this incident, the police took the child under custody in spite of him being a minor.

The tightening grip of  Jihad over West Bengal

The increasing Jihadi influence in West Bengal was reinstated when the mania of the violent mob did not suffice even after the minor’s arrest, and they started shouting anti-Hindu slogans. The streets of Baduria echoed with slogans like “Aryans, return from Bharat”, “Naara-e-takbeer” and “Allah-u-Akbar”. The crowd was made to swell up with the help of loudspeakers. The mob, unsatisfied by the arrest of the student, demanded custody of the student themselves so that they could deliver ‘justice’ as per the norms of Sharia. They attacked the house of the student and committed arson there.

They followed it with violence in Baduria, Basirhat, Swaroop Nagar, Ramchandrapur, Bankra, Beeramnagar, Haroa, Deganga etc. The rioters targeted the Hindus and attacked their houses and shops. Many buildings, including schools and a temple, were also attacked. Rath-yatras were forcibly stopped at many places. Several vehicles including police jeeps and ambulances were set on fire. Various roads and railway stations were blocked which led to the disruption of normalcy. The communal rioters murdered Kartik Chandra Ghosh when he had gone out to buy something. Like they did for Akhlaq and Junaid, do the so-called seculars and the liberals have any plans of holding a protest or march against the brutal lynching of Kartik?

It is believed that the minor student lived in an area where some people, in spite of being citizens of Bharat, rejoiced when the Pakistan cricket team won. On the contrary, the boy was elated whenever Bharat’s cricket team won and he was forthright in his celebrations. It seems that this expressive patriotism of his was a thorn that pricked some of his neighbours due to which he was targeted so violently over a Facebook post. Will the people, who demand the right to their ‘favourite food’ by breaking the law and slaughtering cows publicly, and organize beef parties to disrespect the majority community, now stand to protect the right to free expression of a minor student?

Steep fall in the population of Hindus

The main reason behind this tragedy is religious fanaticism. In the past century the ratio of Hindu population has steeply declined both in East as well as West Bengal. The expansionist interest of the British, Muslim separatism and the distorted secularism of communists helped Pakistan to come into existence. The British power to conspire came to an end with an end to its colonialism, but today its place has been taken by foreign powers (such as China, Pakistan and some other Christian communities). The remaining two factions are still functional in Bharat after its partition. The incidents of communal violence in Kashmir, Uttar Pradesh, Bihar, Kerala, Assam and now Baduria-Basirhat are the consequence of the dangerous cocktail of all these three poisons.

The spat between Chief Minister Mamata Banerjee and Bengal Governor Keshari Nath Tripathi is being given more importance by major sections of the media, ignoring the communal riots in which that spat is rooted. A big section of the local and the national media is either silent or is reporting selectively on this issue. When the victims of these communal breakouts are Hindus and the culprits are Muslims, communal violence is termed as ‘tension between two communities’, but when the victims are Muslims and the culprits are Hindus then the communal identity of victims is repeated again and again.

An attempt for Justification

Most people are blaming the Facebook post for the violence, as if an offensive social media post is a justified reason for such savagery. The so called seculars and the section of the media that label the protest against the obscene paintings of Hindu deities made by MF Hussain and anti-national slogans in JNU as an attack on freedom of expression, are criticizing the Facebook post of the minor student as ‘inflammatory’.

In any civilized society people should have the right to eat their favourite food, wear clothes of their choice and freedom of expression, but at the same time these rights are also defined by the cultural history and context of the society. I am a supporter of a nationwide cow slaughter ban because it involves the conviction of crores of Hindus and is a part of Bharat’s long and rich culture. I am not in favour of the beliefs of either the majority or minority community being trampled in the name of freedom of expression.

The communal violence in Bengal is a result of these distorted policies in which pseudo secularism is being executed in the name of non sectarianism from the past 70 years. This very distortion has pushed Kashmir, large parts of Kerala and now West Bengal to this dreadful state. Till the time Jihadi and fanatic mindsets are encouraged in the name of secularism, incidents like Baduria-Basirhat will keep recurring.