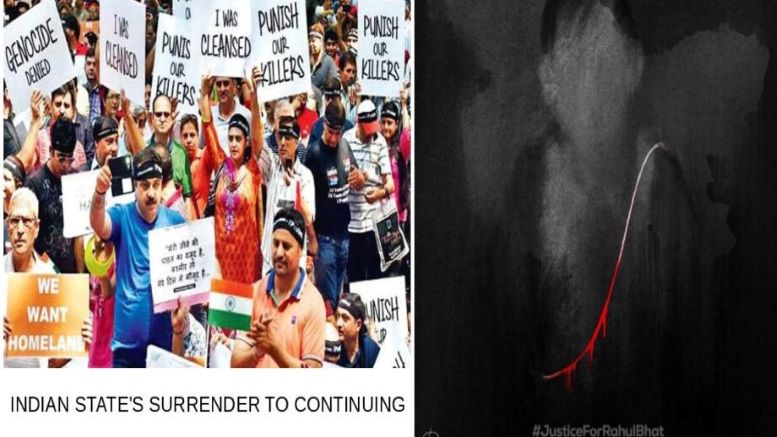 Jammu and Kashmir (J&K) is in a state of continuing Jihad against Hindus since the advent of Islamic rule in the 14th Century. The genocide of Hindus continues unabated in J&K even after the historic neutering of Article 370 in 2019. The recent brazen killing of Kashmiri Pandit, Rahul Bhat at the Tehsil office in Budgam by Islamic terrorists only exposed the Bharatiya State’s impotency in tackling murderous jihad in J&K. 14 civilian Hindus, including Kashmiri Pandits, have been killed by jihadi terrorists in Kashmir from 2019.

The Bharatiya State has lacked the will to dismantle the terror support system well entrenched in administration, academia, politics, police, and even the general Muslim populace in Kashmir. The situation has not changed much post nullification of Art.370, the jihadi network system is still in command and calls the shots in administrative decisions and government employment.

The State is in perpetual denial of genocide and officially calls Kashmiri Pandits living in exile since the 1990 Exodus as ‘migrants’. The central government offers token rehabilitation and government employment schemes to Kashmiri Pandits in Kashmir without a well-thought-out security system like cannon fodders putting their lives in peril.

The worst part is the State’s high-handedness subjected to the Hindu victims of terror. When Kashmiri Pandits staged protests against Rahul Bhat’s killing, demanding justice for him and safe employment posting to avoid repeated killings, the J&K police in Budgam, brutally lathi-charged the beleaguered mourning Hindus using batons, stun guns, and tear-gassed them. Many of the Kashmiri Pandits got grievously injured with fractured hands, deeply bruised bodies, and legs. The total lack of apathy and use of force over peaceful Kashmiri Pandit protestors by the administration is akin to state-sponsored terrorism.

Jammu too faces repeated jihadi attacks like the recent Katra bus fire case, frequent desecration of Temples, recovery of IED in Sidhra, Sunjwan terror attack, demographic assault, and Land jihad. The Jamaats, Tablighis, Wahabis, and Ahle Hadis have a free run in J&K. Muslim-dominated districts of Jammu like Rajouri, Poonch, Doda, Kishtwar, and Ramban are just as problematic today as it was in the 1990s or early 2000s.

The fresh Delimitation of Assembly Constituencies based on a dubious 2011 Census population data continues the pro-Kashmir political hegemony policy by reserving 43 Assembly seats for Jammu and 47 for Kashmir. Most importantly, in a first, it has very dangerously clubbed Jammu’s Rajouri/Poonch in the LoC border region with South Kashmir, which is a hotbed of jihadi terrorism.

The Bharatiya Janata Party government’s hypocrisy is evident when it submits to the Supreme Court that it advocates extending minority benefits to Hindus in States & Union Territories (UT) where Hindus are in minority in a PIL before the apex court while refusing to implement the same in Centre administered UT of J&K even though it is part of their agenda of governance.

The icing on the cake is the hare-brained policy of the BJP allowing a 2.5 Billion Dollar Gulf investment in J&K. This would simply hasten the complete Islamisation of the region and beyond with greater import of radical Salafism and Wahabism. It would also have dangerous implications for the safety and integrity of Bharat.

Recently, the BJP government in the Centre reinstated in government service Shah Faesal, the highly controversial and jihadi minded State contrived IAS topper. In 2019, he had infamously called Bharat a ‘Rapistan’ and ‘Lynchistan’ in his obnoxious Tweets which displayed a clear secessionist mindset after the nullification of Art.370. Soon after he gave his resignation to the Centre and started his own political party with another controversial figure, Shehla Rashid. Shah Faesal even tried to flee to Turkey as Recep Tayyip Erdoğan provides safe haven for all Islamic jihadi secessionists from Kashmir. Faesal was kept under house arrest as he tried to hobnob with the dubious Gupkar Alliance. For the past few months, he has been Tweeting in praise of PM Modi and his government policy, as his non-starter political career came a cropper. With his reinstatement into the elite government service, it is quite evident that the Modi government is appeasing and rewarding Jihadi elements.

Jihadi terrorist Yasin Malik who was feted by the UPA government and media, as a celebrity Youth Icon, has been in news recently for confessing to terror funding which has been touted as a great achievement of the Modi government. The truth is Yasin Malik is still not being tried for being one of the primary persons driving loot, massacre, and rape of Kashmiri Pandits as leader of the JKLF in the 1990 genocide and ethnic cleansing of Hindus from the Valley. Notably, Yasin Malik has openly confessed in an old interview given to Tim Sebastian of BBC in Hard Talk, to having murdered Justice Neelkanth Ganjoo (for awarding the death sentence to terrorist Maqbool Bhat) and four Air Force officers.

Yasin Malik would certainly face the gallows if he is prosecuted for the unspeakable crimes perpetrated by him. Now his confessions for a far lesser crime would ensure that he would be out of jail in a few years’ time. Isn’t the present central government attempting to befool and divert the attention from his heinous crimes against humanity by getting him booked for relatively less serious crimes?

All the while Yasin Malik was celebrated as a hero, the Indian administration was facilitating him to get a passport, VISAs for various foreign countries, and even allowed him to go to Pakistan. Would the people facilitating his travel abroad ever be booked for their encouragement of Jihadi terror?

The Bharatiya State thus, irrespective of the party in power, the Bharatiya Janata Party (BJP) or the Indian National Congress (INC), tries to unsuccessfully buy peace by mollycoddling and cutting deals with the jihadi ecosystem by splurging money and facilities on them, while ignoring peaceful and nationalist Hindu areas in Jammu. Kashmiri Hindu Pandits are just sacrificial lambs for the Indian State, which devises time and again perfunctory schemes for their rehabilitation like the Prime Minister Employment Package without any serious thought to the security of postings in remote areas and dismantling of the terror support system in J&K. The BJP state policy has been much of the old Nehruvian INC wine in a new bottle and abject surrender to jihadi apparatus in J&K with no cessation of Hindu genocide.

(This article has been authored by Gayatri N and was originally published on bharatvoice.in website. Minor edits have been made to suit the HinduPost style guide.)