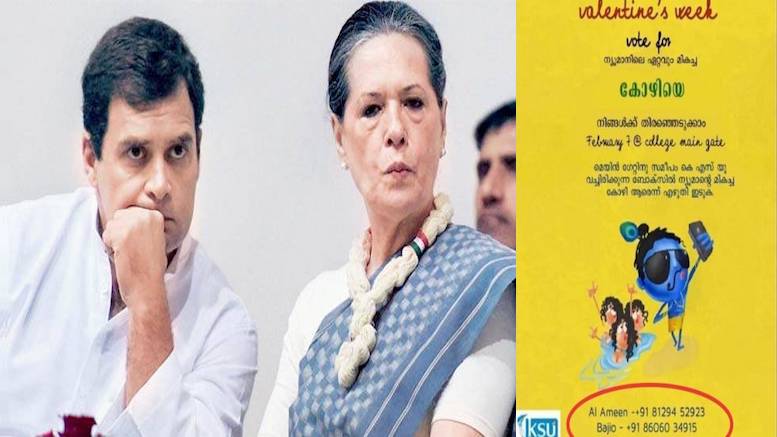 In the year 2010, a particular incident shocked the public conscience in Kerala. It happened at The Newman College in  Thodupuzha, Idukki. TJ Joseph, a soft spoken Professor working at Newman College had both his hands chopped off by Muslim terrorists of the dreaded Popular Front of India (PFI). These Islamic terrorists charged Joseph with blasphemy saying that he had insulted their prophet Mohammed. The then college management and the Christian Catholic church which runs the institution showed their cowardice. Instead of supporting and helping Joseph, they went ahead and dismissed him from service.

The first week of February saw another controversy erupt from the same institution. The Congress Party has a students wing called Kerala Students Union (KSU). They decided it was easier to insult Sri Krishna, revered by Hindus. The KSU cheap tricks department designed a poster signed by Al Ameen (KSU Unit president) and Bajio Johnny (Unit vice president), a Muslim and a Christian respectively.

The poster depicts three women bathing and posing for Sri Krishna who in turn is taking a selfie of all of them together. The poster asks students to vote for the ‘best womaniser’ from the campus. This was part of their Valentine week celebrations. KSU is one organisation that has churned out several women abusers – solar-scam accused Saritha S Nair had charged likes of Hibi Eden, Adoor Prakash, AP Anilkumar and KC Venugopal as those who sexually exploited and extorted money from her along with ex-CM Oommen Chandy. All of them are now national level leaders of the Congress with close ties to both Rahul and Sonia. Another common thread is that all four entered politics through the KSU. All four leaders were accused of rape by Saritha S Nair but no action has been taken against them yet. A judicial commission later indicted former CM Oommen Chandy and others for their role in the solar panel scam. Congress leader from Trivandrum, Shashi Tharoor is accused of killing his own wife Sunanda Pushkar.

A complaint has been submitted to the DGP of Kerala against the offensive poster. The complaint says that this is a naked attempt by the KSU to destroy communal harmony. If legal measures are not taken immediately the repercussions would be serious, warned S.J.R. Kumar, a former President of Kerala Vishwa Hindu Parishad (VHP), who filed the complaint. The KSU has come out with the usual apologies mentioning that it was not their intention to hurt the religious sentiments of any community.