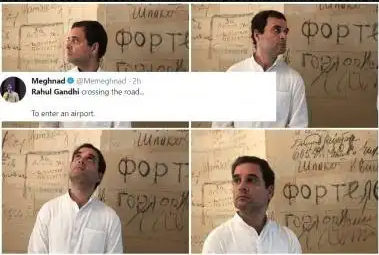 Close on the heels of launching an attack on the Bharatiya government from Germany, Rahul Gandhi has spewed venom on the RSS equating it to ‘Muslim Brotherhood’ (an Islamic organization banned in Egypt, Russia, Syria & UAE) in London, apart from criticizing Bharat’s External Affairs Minister Sushma Swaraj whom he reckons is good enough for issuing visas only.

Rahul Gandhi’s anxiety to get into the PM’s chair is understandable but such frantic outbursts against the government which are void of substance & logic will only further erode his credibility amongst the public.

Rahul Gandhi’s latest tirade against the government from German soil leaves one bewildered, and no matter how much you try to analyse the equation that the Congress President has put forth (Demo + GST + joblessness = lynching), it defies logic & reason. And then to justify the creation of a terror outfit like ISIS (Islamic State) on circumstances and isolation of a particular segment of society in Iraq, is preposterous & beyond comprehension.

The Government of the day can be attacked in so many ways vis a vis its policies & programmes, but it should be based on facts & substance to be meaningful in the eyes of the public. It has been more than 2 years since demonetization & its effect, good or bad, has not touched one particular segment of community but the whole of Bharat. So to say that demonetization has led to lynching incidents is ludicrous.

If anyone was stung by demonetization the most, it was the big buck politicians & their parties who had unaccounted wealth stashed away for elections & personal purposes. The effect that demonetization had on the Bharatiya economy can be debated umpteen number of times, but to relate it to incidents of lynching is balderdash.

GST has been an ongoing process for the past fifteen years since UPA -1, though it is another matter that it only got implemented during NDA. It has been ratified by the Bharatiya parliament of which Rahul Gandhi is also a part & is a step towards one nation one tax as has been adopted by developed nations across the globe. How GST leads to lynching is known only to the Nehru-Gandhi scion.

Unemployment & joblessness is a recurring phenomenon & has been there since independence given the burgeoning population. The numbers can be debated till the cows come home, but to correlate it to lynching is living in a fool’s paradise (or shall we call it Rahul-Gandhi land?).

If Rahul Gandhi wanted he could have criticized the government on its policies & programmes without juxtaposing & relating the unrelated, but by trying to connect incidents & events which are not even remotely related he has committed a faux pas & that too on foreign soil.

Was he playing to the European gallery by dishing out some salacious stuff which the FIIs (Foreign Institutional Investors) & NGOs would gobble up & throw a spanner in Bharat’s development by withdrawing & withholding FDI, or was he trying to woo the Muslim vote? But one thing he was doing for sure was tarnishing Bharat’s image abroad without any rhyme or reason.

Rahul Gandhi’s antics in parliament only recently earned him the reprimand of the Lok Sabha speaker, and now his ridiculous equation explaining lynching has left everyone wondering about his political acumen or the lack of it.

For all that mattered, he could have criticized the Modi government on DeMo, GST & unemployment without equating it with lynching. And to top it all, he has justified the creation of a terror state like the ISIS caliphate on the ostracizing of a particular populace in Iraq which is factually incorrect as only Saddam Hussein’s Baath party was isolated in post-Saddam Iraq.

No one can justify the creation & existence of a terror outfit which has killed, maimed and raped thousands of innocent civilians & put the blame on unemployment, unless he or she is sympathetic to the cause of such terror outfits. Perhaps there is an intellectual vacuum in the Congress President’s mind which prevents him from seeing things in the right perspective & renders him incapable of substantive criticism.