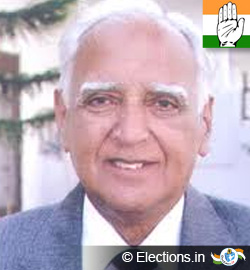 Delhi Police has booked 76 year old Congress Rajya Sabha MP Shadi Lal Batra on charges of sexual assault, as per news agency ANI. An FIR was registered after a woman leveled charges against him that Batra sexually assaulted her on pretext of providing her a high-level job in Haryana judicial services.

The complainant alleged that Batra sexually assaulted her on pretext of providing her a high-level job in Haryana judicial services.

This is not the first instance of a Congress politician being charged for sexual assault or getting caught in a sex scandal. Here are some other high profile cases which have to come to light in recent years –

1.) Abhishek Manu Singhvi: After securing a Rajya Sabha seat in 2012, the senior Congress lawyer-spokesman was caught in a compromising position in his Supreme Court chamber with a lady lawyer who it is alleged wanted some favor for him. Singhvi resigned as the Congress spokesperson and as head of a key parliamentary panel. However, he has now been reinstated as Congress spokesperson and is often seen on TV.

2.) ND Tiwari:  The 85-year-old Congress veteran, who was serving as Andhra Pradesh governor, had to step down from office after a video clip showing him in a sex romp with three women was aired by a Telugu TV channel.  Following the operation he resigned and apologized to the public. Tiwari’s character came under the scanner a long time ago when a lady Ujjwala Sharma accused him of fathering his son Rohit Shekhar, and the son demanded a DNA test.

3.) Mahipal Maderna: The 59 year old Congress cabinet minister in Rajashtan Government was convicted along with another Congress MLA MLA Malkhan Singh Bishnoi for the murder of nurse and midwife, Bhanwari Devi, who was allegedly blackmailing the two based on a CD in which they were seen in a compromising position with her.

4.) PJ Kurien: A 16-year-old school girl from Suryanelli, Kerala, was kidnapped and subsequently raped by 37 persons, over a period of 40 days in 1996. The girl identified Rajya Sabha Deputy Chairman and veteran Congress leader PJ Kurien as one of the men who raped her. However, he was discharged by courts for ‘lack of evidence’. The main person convicted for this crime, Dharmarajan, recently claimed that Kurien visted the guest house where the girl was kept captive. He later retracted this statement.

5.) PK Kunhalikutty: In 1987, Kerala was rocked by a sex scandal known as ‘ice-cream sex parlour scandal’. The scandal relates to allegations that an ice-cream parlour in Kozhikode was being used as a cover to lure young women into prostitution. One of the victims, Rajeena, accused Kunhalikutty, IUML leader and state Industries Minister in the Congress-led UDF government, of raping her. Kunhalikutty quit as industries minister following the charges.

6.) Ellath Kunhikrishnan: The Congress leader was arrested for allegedly luring and sexually exploiting a 16-year-old girl in Trikaripur, Kerala. According to the police complaint, the child is pregnant. Thrice-married Kunhikrishnan is the Dalit Congress district vice-president, Trikaripur mandalam Congress vice-president, and Chakrapani temple trustee.

7.) Babush Monserrate: This Goa MLA and former Congress leader was arrested for allegedly raping a minor girl from his assembly constituency.

8.) Gopal Kanda: This Haryana cabinet minister in the Bhupinder Singh Hooda Congress Government was accused of abetting the suicide of a 23-year-old former air hostess Geetika Sharma who was earlier employed in Kanda’s MDLR airlines.

(This has been curated from the following news sources – 1, 2, 3, 4; Featured Image Credit: elections.in)