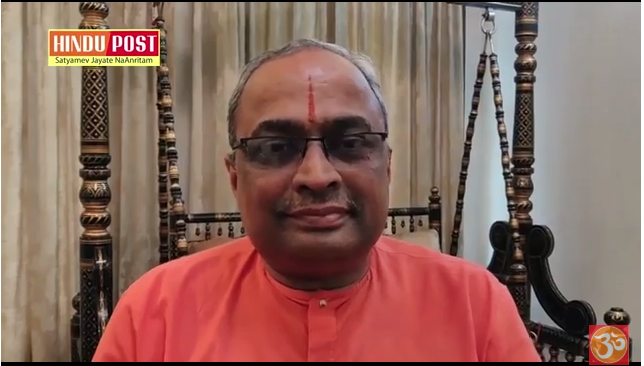 Dr Charudutt Pingle, Rashtriya Margdarshak, Hindu Janjagruti Samiti, was interviewed this week by HinduPost’s Mayank Jain, on the concept of ‘Hindu Rashtra’, a misunderstood term by the secularist elite of this country.

An ENT surgeon by training, Dr. Pingle took to selfless full-time service for the Hindu cause for the last many decades. In this interview he has raised the issue of the subversion of Bharat’s Constitution during Emergency when the preamble of the Constitution was itself amended and till now not one lawful action has been taken against that brazen act which caused irreparable damage to the Constitution of Bharat. It may be recalled, he said, that even after partition, the word ‘secular’ was not added to the Constitution of Bharat. While the Parliament hasn’t defined secularism even till today, in 1976, during Emergency, the word ‘secular’ was thrust into the Preamble illegally.

Consequently, Hindus have become second class citizens in their own country because the Constitution gives special status to the minorities. In Mizoram and Meghalaya, they openly talk of a Christian Rajya. Congress which supports secularism in the rest of Bharat opposes it in Kashmir. There seems to be an international conspiracy to keep Hindus down in Bharat, he said.

When Dr Pingle was asked about the apprehension of Communists about the status of the so-called lower castes in a future Hindu Rashtra, Dr Pingle retorted by reminding that how Gandhi faced discrimination in South Africa in a state which practiced apartheid, and how Madan ji Dhingra faced humiliation by entry boards outside clubs which read: ‘Indians and Dogs not allowed’; how Europe’s history was a story of the struggle between Catholic and Protestants and how Islamic society has its own sects and divisions.

Dr Pingle said that Hindu shastras had no concept of the high or low born. In a Hindu Rashtra, the Raja was ordained to treat the people like his own sons and daughters irrespective of their status or birth

Dr Pingle pointed out why there is no call for a revolution against the class system created by Nehru’s secular state where Class IV employees have to salute Class I officers.

Bharat had its own system of education which was imparted in Gurukuls and it had its own economic model which was so successful that till the 17th century Bharat’s GDP was a whopping 32% of the global economy. As far as Bharat’s military was concerned, it had some of the bravest soldiers in the world.