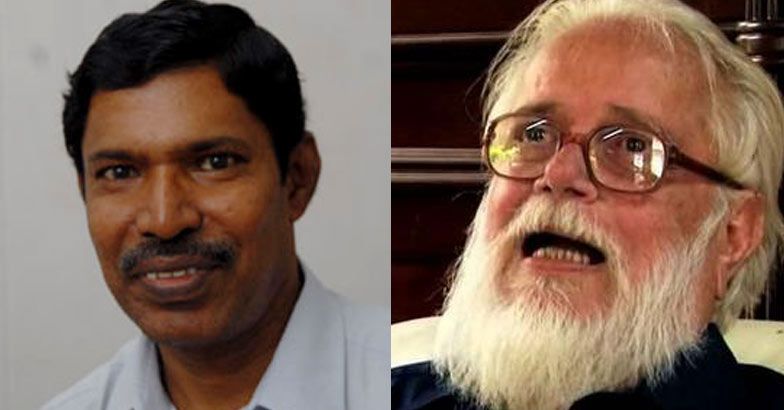 Sometime in 1994 there was a rift brewing in the Congress Party in Kerala. The then CM K Karunakaran’s son had insulted Ramesh Chennithala, G Karthikeyan and Shahnawaz (all members of the I-group faction that Karunakaran led).

Another Congress Factional leader A K Antony (leader of the A-group rival faction in Congress) was planning to topple Karunakaran to install himself as the Chief Minister. His hitman for the job was Oomen Chandy, the Finance Minister (FM) in the Karunakaran cabinet.

If Antony had to replace, they had to make Karunakaran, a formidable leader, fall big. Karunakaran had the sworn allegiance of the most of the police establishment in Kerala, whom he had a special liking to. One of Karunakaran’s blue-eyed officers was IG Raman Srivastava, an exceptionally talented officer with impeccable integrity. But Raman Srivastava was on the cross-hairs of another officer DIG Siby Mathews, who was Oomen Chandy’s close confidant.

Siby Mathews knew that he could never be DGP if Raman Srivastava remained in the force, and so he was out to sabotage Srivastava. The plan was to bring down Karunakaran by framing Srivastava …the wolves were looking for the perfect opportunity. Any collateral damage was acceptable to these people to meet their goals.

This is when a Senior Inspector Vijayan came across a good-looking Maldivian woman Mariyam Rasheedha who had come to the commissioner office to get her visa extended. Vijayan wanted “certain favours” from Mariyam and was promptly rebuked. Seemingly, she told Vijayan that “I will complain to your IG.”

At another level, IB (Intelligence Bureau) Additional Director Rattan Sehgal, who was later discharged for being a CIA mole, was looking at sabotaging the Indigenous Cryogenic Engine program of ISRO being worked on at LPSC (Liquid Propulsion Systems Centre) Mahendragiri.

Rattan Sehgal’s target were the two scientists who were critical to the program, Nambi Narayanan and Shasi Kumar. He let his deputy RB Sreekumar in on this conspiracy. Sreekumar was very close to Antony faction of the Congress establishment in Kerala. He was already part of the discussions of the Antony faction to bring down the Karunakaran Govt.

Does the name RB Sreekumar (RBS) sound familiar? Yes, he was the Additional DGP Intelligence of Gujarat during the 2002 riots who made false allegations against Modi on behalf of the Congress…the same RBS.

All pieces of the game were falling together for RBS, Siby and the Antony Faction of the Congress. They knew this would be at the cost of the lives of 2 Maldivian women, an honest IPS officer and two top scientists of ISRO who were heading a prestigious program for Bharat.

Bharat was denied cryogenic technology by the US under MTCR (Missile Technology Control Regime), and even the Russian’s withdrew after pressure from the group. Bharat had to develop its own cryogenic engine. The task was given to Nambi Narayanan and Shasi Kumar of LPSC. They were the main people behind Bharat’s space warhorse PSLV (Polar Satellite Launch Vehicle).

Each of the conspirators knew that if these scientists are taken out of the picture, Bharat’s Space and Missile program will suffer a body blow. But the Antony faction didn’t care for the nation or its security, they just wanted to take out the rival in the party. For Siby Mathews, it was his promotion which mattered. For Rattan Sehgal, its was the dole from CIA which mattered. For RBS, pleasing his Congress bosses mattered. BHARAT, the nation, mattered to none of them.

Thus a grand conspiracy was created, a leading Malayalam newspaper was roped in as the chief propagandists…the modes of communication were set. The senior editor suggested that reports should have a mix of sex and sleaze….writers who could spice up the police versions were pulled in to write stories in the publication.

One fine day Kerala and Bharat woke up to the story of two middle-aged scientists from ISRO who were allegedly honey trapped by two Maldivian women, Mariyam Rasheeda and Fawzia Hassan. We were told that the two scientist sold Bharat’s cryogenic engine secrets in exchange for sex and millions of dollars.

The National and Malayalam media reported every version put out by the police. The leading Malayalam publication, and its commissioned soft-porn writers put out stories with vivid details of sexual encounters of the Maldivian women involving the scientists and a senior police officer in Kerala.

In a few days, stories of the Police officer allegedly involved in ‘espionage’ case being close to the CM Karunakaran appeared in the media…thus hinting that the CM is shielding the officer, and hence personally involved in the ‘ISRO Espionage scandal’.

The media started insinuating that IG Raman Srivastava was the officer involved and targeted Karunakaran for supporting him. It was clear to every one involved that Srivastava did not even have remote involvement with any of this. But the Antony group cabal had planned this route to get to the jugular of Karunakaran.

The prominent Malayalam media house pumped in more colourful stories. The High Court (HC) took cognisance of the reports and passed strong strictures against the government for not getting IG Srivastava investigated….Oomen Chandy, who was the then FM, resigned from the ministry to pressurise Karunakaran.

Finally, Karunakaran relented and resigned as the CM. ‘Saint’ Antony took charge as the the CM of Kerala. The Antony cronies at Kerala Police knew that they had no case and they would be castigated by the courts when asked to present evidence. Hence DIG Siby Mathews recommended transfer of the case to CBI.

Meanwhile, the two scientists Nambi Narayanan and Shashi Kumar underwent humiliating torture under Kerala Police and at the hands of IB led by RBS. They were forced to confess a crime which never happened. The two Maldivian women were sexually exploited. The families of the two scientists were branded spies and harassed. Nambi Narayanan’s wife was once asked to get out of an autorickshaw because she was married to a spy. Even his children were targeted and branded as traitors.

CBI formed a special team to investigate this high profile case. In the very first week of investigation, it found out that there was not even a shred of evidence against the accused. Forget evidence, the very basis of the case did not exist, there was no “Espionage”.

Still, the leading Malayalam publication created fake stories of how the CBI had admitted to finding large amounts of hidden assets from the homes of the two scientists. The media house couldn’t let down the Antony Government in its early days – if there was no spy case, then the very basis of leadership change would collapse.

Finally, CBI admitted in court that it was a well-planed conspiracy by the Kerala Police and there was no case against the accused. It recommended action against Kerala Police officers Siby Mathews, Vijayan, KK Joshua and IB officer RBS.

The Supreme Court discharged all the accused and asked the Government to take action against the Police and IB officers. Subsequent governments didn’t act on the SC directions. Siby Mathews was rewarded with the Chief Information Commissioner post by Oomen Chandy when he became CM.

IB Additional Director Rattan Sehgal was later caught passing on Bharat’s atomic secrets to CIA and was discharged from service. He fled to the USA. RBS made a career out of Modi abuse and can be seen in the anti-Modi seminar circuit along with Teesta Setalvad and the rest of the Breaking India gang.

‘Saint’ AK Antony went on to become our Defence Minister who single handedly led the decay in the infrastructure and preparedness of our Armed Forces.

The two scientists were never rehabilitated even after they were discharged by courts. They were given desk jobs and lived with the tag of traitors.

The biggest victim of this conspiracy was national security and our space program. The cryogenic engine program was set back by 2 decades and only in 2014 were we able to do a full system flight with this technology.

Congressi crooks played with the lives of our Scientists, Space Program, helped CIA and compromised national security to win a petty inner party factional fight. This is the “Congress Mindset” that Modi keeps mentioning. They will eat this country hollow and not bother as long as their petty agendas and the first family is taken care of.

(This is an edited version of a Facebook post by Robert Rosario. We welcome more such contributions for our #CongressChronicles series which is intended to reveal forgotten episodes about the Congress party’s murky past & disastrous legacy)