With assembly elections fast approaching in Kerala, there is a seismic shift in policy towards religion and temples being adopted by both, the ruling communist outfits and the Congress party and its allies. The same political leaders who had either remained mum or had publicly expressed their solidarity with the very forces that had tried to violate Hindu beliefs are now speaking about temples and the rights of Hindu believers in the Sabarimala matter.

This group includes P K Kunhalikutty from the Indian Union Mulsim League (IUML), Oommen Chandy from the Indian National Congress (INC) to M V Govindan of the Communist Party Marxist (CPM). This volte-face is viewed by the public as an attempt to garner the fast-eroding Hindu vote for these political parties. They are also the same political parties that had tried to destroy the sanctity and the sacred rituals of temples (including Sabarimala), in the first place – CPM did it openly while INC and IUML gave their tacit backing. 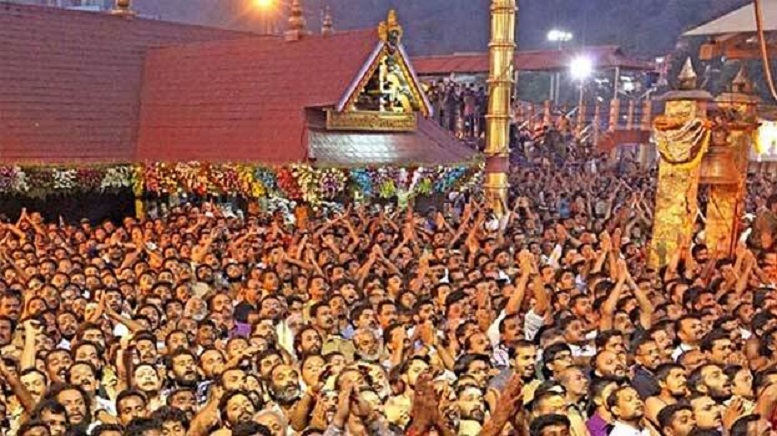 Govindan had recently revealed that dialectical materialism is fast becoming irrelevant in the present scenario. This remark was made in reference to the Sabarimala issue and it also meant that it could be resolved through dialogue after analyzing the issue. Any brownie points that Govindan tried to score were immediately negated when his counterpart Kanam Rajendran from the Communist Party of India (CPI) rebuffed these comments.

The INC has now come out with a policy to garner undecided Hindu votes. They propose to make any menstruating women entering Sabarimala a cognizable offense. The same party was literally a mute spectator while the CPM was busy trying to destroy the iconic Temple with its anti-Hindu policy. Smart marketing though, like the one being done now, did ensure the Congress-led UDF coalition 19 out of the 20 seats during the recently concluded Lok Sabha elections. During the Sabarimala agitation, the BJP took the brunt of the police and judicial action, but failed to make any significant gains in the Lok Sabha elections.

On the contrary, another social issue adversely affecting both Hindus and Christians i.e. Halal discrimination is being brushed under the carpet by the same INC. This is to appease the Muslim voters who have traditionally stood with the IUML which is also a major partner of the INC in Kerala.

Turkey’s Hagia Sophia – a pagan temple converted into a church 1500 years ago, then converted into a mosque around 500 years ago, then turned into a museum by the secular Ataturk – was recently converted back into a mosque by the Islamist autocrat Erdogan. This is a burning issue with many local Christians in Kerala and they view this aggression as Islamization of their sacred space (now extinct pagans of Europe obviously don’t matter). Chandy Oommen, the son, and heir apparent to the Kerala Congress throne of his Syrian Christian father Oomen Chandy, the ex-Chief Minister of Kerala, recently tried to downplay both Halal and Hagia Sophia issues, and has appealed to his Christian brethren to stop protesting against the same.

The sole purpose of this appeal was to try and keep the IUML on its side. The INC has 21 seats and the IUML 18 in the 140 seat assembly. This double play has not gone down well with both the Christian and Hindu voters who see these issues as Islamic aggression and bigotry.

All political parties understand that unlike other communities, the Hindu vote is spread between the Congress, the CPM, and the BJP. With BJP and its allies seeing a steady rise in vote share to 15% in the 2019 election, there are no other options left for the ‘seculars’ but to woo the Hindu voter if they have to come to power. With this in mind, all parties are now trying their best to appear pro-Hindu.

The ruling Marxists under the vile guidance of Pinarayi Vijayan and his cabinet of ministers have always shown double standards towards Hindus. This they did openly, especially when it came to temples. They were waiting for an opportunity and were gifted one by none other than the Supreme Court which offered them the women’s entry (of menstruating age) into Sabarimala temple, on a platter.

The Communists jumped in and went a step ahead by sending in activists like Rehana Fathima, Bindu Ammini, and Kanakadurga to Sabarimala. This was done on purpose and it hurt Hindu sentiments, although it did garner them the support of non-Hindus. It was also a time of upheaval amongst Hindu devotees who stood up for their case even though they were mercilessly beaten up, tortured, and arrested. Hundreds of cases were registered against devotees who were only trying to save their beliefs. Even women and children were not spared.

All above-mentioned atheists were provided state and police protection and ultimately two succeeded in covertly gaining entry into Sabarimala Temple in the wee hours of 2nd January 2019. Multiple attempts had been made by various women activists previously that were thwarted by Hindu leaders like Valsan Thillankeri of the RSS and K Surendran from the BJP and various other Hindu activists who had stood guard at the temple.

It should also be noted that this sneaky entry was done in the backdrop of a state-sponsored Vanitha Wall that took place the previous day, ie on the 1st of January 2019. Many women including Muslims and Christians took part. The oddity became clear when one considers the fact that both these denominations do not have full entry into their respective places of worship and would never countenance Hindu or state interference in their religious matters.

That the ruling CPM was not interested in women’s rights became apparent from the response of their leaders as soon as the breach of the shrine became public. None other amplified it more than M Swaraj, MLA and DYFI State secretary, who infamously said in a speech that Sri Ayyappan had married Malikappuram. He has since been booked for hurting religious sentiments. Hindus who flock to Sabarimala in their crores, consider Sri Ayyappan a brahmachari (celibate).

The communist double standard became apparent when they refused to implement the Supreme Court order to seize all churches belonging to a particular sect in Kerala and hand over the same to another one. In this case, Pinarayi has been engaging in talks with various stakeholders. None from the majority community were consulted during the Sabarimala Women’s entry and the government had pushed in unscrupulous activists.

While the CPM’s hate for Hindus is out in the open, Congress has mastered the art of running with the hare and hunting with the hound. Moreover, given the party’s past track record, Hindus should not take any utterance by state leaders at face value. One just has to remember how the Congress supremo Sonia Gandhi, a practising Roman Catholic, in Jan 2019 had stopped her party MPs from holding a back band protest in support of Sabarimala devotees.