Is Congress-AIUDF alliance pitching a Muslim Chief Minister for Assam?

As per the latest news coming from Assam, the state Congress is getting into an alliance with All India United Democratic Front (AIUDF), led by perfume baron Maulana Badruddin Ajmal, for the upcoming elections in 2021. It is also being reported that the CM face of the Congress, after its alliance with AIUDF, will be Rockybul (Rakibul) Hussain.

Badruddin Ajmal’s stamp on this move, if true, is undeniable. The sidelining of 3-times CM and veteran Congress leader Tarun Gogoi (85) is almost certain. Talking to media persons recently, Rakibul Hussain made the bizarre suggestion that ex-Congress leader Himanta Biswa Sarma (now with BJP and handling finance, health, education and other portfolios in Assam Govt.) should return to the party and become the Congress CM candidate – the implicit suggestion being that senior Gogoi is no longer acceptable to him.

Himanta Biswa Sarma had once warned that if Assam does not recognize the lurking dangers and learn to distinguish between enemies and friends, it can be ruled by a Muslim CM like Badruddin Ajmal after just 10 years. Well, one can rest assured that if the Congress-AIUDF alliance comes to power next year, the remote will be firmly in Ajmal’s hands, irrespective of who is the CM.

Back in 2006, Tarun Gogoi, the then Chief Minister of Assam had infamously commented, “Who is Badruddin?” when Badruddin was contesting for the first time after floating his newly founded party, AIUDF. In that election itself, Badruddin and his party, with 10 out of 126 seats, had established itself as a force to reckon with in Assam. With huge numbers of Muslims of Bengali descent supporting them combined with the illegal Bangladeshi Muslim votebank, AIUDF has risen to prominence in the political scene of the state, and the key leaders of the Congress have come to realize that as well.

It must be noted that Muslims constituted 34.2% of the population of Assam as per Census 2011, having registered a whopping jump of 3.2% from the 2001 census. Observers say that such rapid increase can only be explained through higher Muslim fertility and a consistent influx of Muslims from Bangladesh.

Who is Badruddin Ajmal?

One of the most influential Muslim leaders in the country, Badruddin Ajmal runs the Ajmal Group of Companies that trades in attar, oils, and textiles. Having studied at the Darul Uloom Deoband, he holds a master’s degree in Islamic Theology and Arabic from the notorious seminary, and is also president of the Assam State Jamiat Ulema-e-Hind.

He is three-time Member of Parliament from Dhubri constituency. When the BJP government in Assam decided to promote a two-child policy, Badruddin Ajmal denounced it stating Islam did not recognize such a law.

“Our Islam does not recognise this law. As far as the number of children is concerned, the government has undertaken many programmes to stop the birth of children and reduce the size of the family. It is unfortunate to know that the BJP government which runs on the directions from Nagpur. Mohan Bhagwat saheb says in his speeches that you should produce 8-10 children and his government tells to produce only two children. First, they should decide among themselves regarding how many children should be produced. In Islam, there is no such restriction. As it is, we don’t get any government job. We do not expect anything from this government. So, our advice is to produce as many children as possible and educate them.” said Ajmal.

In 2014, the Election Commission had issued him a show-cause notice for making communal remarks against the BJP. Ajmal had exhorted Muslims in Assam to “unite against Hindus” during an election speech before the 2016 Assam assembly elections. He was also accused of fanning violence and communal sentiments in the wake of the 2012 Assam Riots. He is also accused of instigating the exodus of North-east students and workers from the West and South of Bharat, and someone that even indigenous Assamese Muslims accuse of harboring illegal Bangladeshi Muslims.

But instead of countering the dangerous anti-Hindu ideology of a rank communalist like Badruddin Ajmal, Lutyens’ journalists like Shekhar Gupta  praise him by saying –

“Mr Owaisi and, to an extent, Mr Ajmal spoke a more modern language, of jobs and empowerment….Messrs Owaisi and Ajmal could be forces of modernity.”

AIUDF MLAs have gone one step ahead of their supreme leader. In 2017, former MLA Sheikh Shah Alom said Muslims would soon attack Hindus to avenge ‘atrocities’ against them. MLA Aminul Islam called Ahoms (majority Hindu community of Assam) as ‘foreigners’, and the same MLA was arrested recently for spreading conspiracy theories that ‘COVID-19 was being use to target Muslims and kill them in quarantine centres’.

In March 2020, Ajmal and Gogoi together backed senior journalist Ajit Kumar Bhuyan as their joint candidate for the Rajya Sabha elections.  The Congress has now officially joined hands with the All India United Democratic Front to form an alliance with the hope of taking on the BJP government in the upcoming elections.

“We have got a very positive response to our concept of Grand Alliance. So far, the AIUDF has given consent. The Left parties have agreed to be part and said the final decision will be announced after their internal discussion,” declared Assam Pradesh Congress Committee President Ripun Bora to PTI.

MLA Aminul Islam, also the Organizational General Secretary of AIUDF, has also informed that his party’s leaders have decided to join the proposed “Grand Alliance” after holding discussions with former CM, Tarun Gogoi.

However, sensing the increasing assertiveness of the Muslim vote-bank and its shrinking credibility among Hindus, Congress has now discovered common ground with AIUDF through their similar opposition to the Citizenship Amendment Act. Both the Congress and the AIUDF have been adamant in their objections to the CAA, and vouch for the 1985 Assam Accord that sets the midnight of March 24, 1971, as the cut-off for Bharatiya citizenship to refugees from Bangladesh. This cut-off date overlooks the systemic persecution Hindus have continued to suffer even after the independence of Bangladesh from Pakistani rule – over 2 lakh Bangladeshi Hindus are forced to migrate each year to Bharat due to the land grab, attacks, sexual violence and other forms of persecution they face.

“The AIUDF believes in the Assam Accord and supports its implementation. The AIUDF is against the CAA. They are in the interest of the people of Assam. They are not communal — they are not anti-Hindu, but the BJP is anti-Muslim. Of course, they are working for the community they represent, and that is not a crime. Assam’s problem is not the AIUDF — the problem is the misrule by the BJP and we will fight to end this misrule.” stated Assam Congress Chief, Bora.

Rift within Congress due to AIUDF?

However, not all Congressmen are welcoming this alliance. Many understand that the Congress-AIUDF alliance will push them farther from the Hindu electorate who opposes the AIUDF for its Islamist ideology. Key functionaries including Pradyut Bordoloi, Debabrata Saikia, Bhupen Borah, and Rana Goswami held a separate assembly and have decided to appeal to the CongressHigh Command seeking the removal of the party’s state president. They prefer to have an alliance with the ‘secular’ and non-BJP forces, such as the Communist Party of India (Marxist), Communist Party of India, Krishak Mukti Sangram Samiti, and the Bodoland Folks’s Entrance (BPF).

On the other hand, the Hindus in Assam are not approving of this alliance, and have taken to Twitter to voice their displeasure: 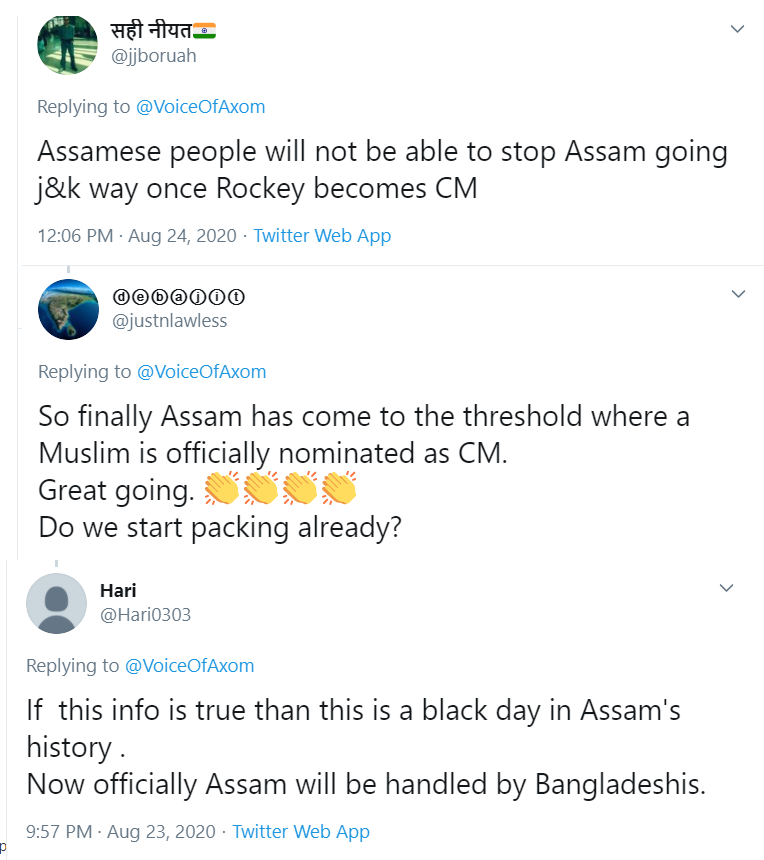 While one can understand a total Islamist party like AIUDF projecting a Muslim candidate, its must serve as a wake-up call for the Hindus in Assam, if the situation has come to this that even a self-proclaimed secular party like the Congress is forwarding a Muslim CM candidate in a state which is still 65% Hindu.