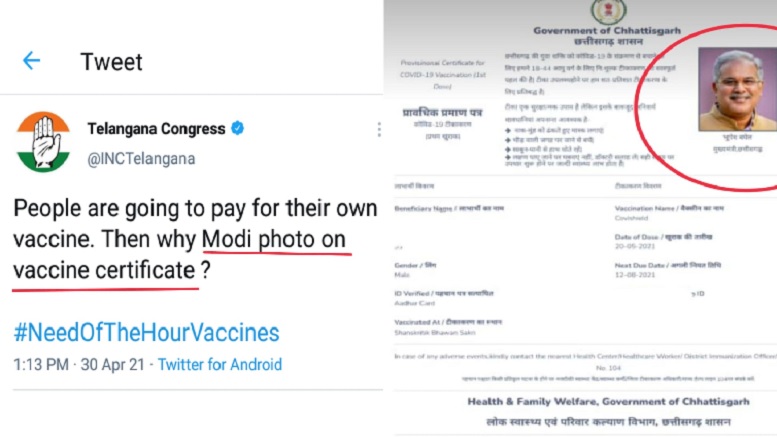 The double standards that the Congress party thrives on were on full display recently when it questioned the central government’s decision to affix Bharat’s Prime Minister’s photo on the Covid vaccine certificates being issued to the public.

That it came from a party that exclusively chose to name all its big projects or schemes after either Indira or Rajiv or Jawaharlal seemed shameless to say the least. This duplicity was further exposed when Chief Ministers (CM) of states where the Congress is in power themselves started issuing vaccine certificates with their own photos.

This is a classic example of an offensive countermeasure since their own dirty tricks department stands exposed with its latest anti-national ‘Toolkit’. The audacity with which new ventilators supplied to Congress states were dumped without proper maintenance, just to show the center in a bad light is another example of its evil policies. Other tricks involve actively hoarding both hospital beds and medicines using ‘friends in the society’ and releasing the same after the party approves, to appear as good samaritans. So what if this image-building puts lives at risk.

It should be remembered that unlike in the times of the grand old party’s rule, Bharat has produced over 25 crores of vaccine doses in Bharat under less than a year, and vaccinated most of the old and vulnerable citizens, free of cost. Unlike the Congress who thought of public coffers as their own, the BJP knows that it is public money and now wants those Bharatiyas who can afford it to pay for his or her own vaccine, to supplement the free government drive.

People remember the central government’s efforts to fast-track vaccine production in Bharat and trust them to cap the price at a reasonable rate. The policy is such that the weaker sections amongst the remaining 110 crores can still approach government hospitals for a free vaccination. Congress knows these are excellent government policies and this is exactly what is adding to their frustration.

Then again without the double standards, the Congress party might become unrecognizable.  ‘Vaccine politics’ is part and parcel of the recent ‘toolkit’.

A closer look at the last crisis that Congress faced while in power at the center should give us an insight into what might have happened to Bharat if they had been at the helm right now. The Uttarakhand floods on June 16th, 2013 was one of the worst natural disasters to hit Bharat after the 2004 Tsunami. Over 5700 lost their lives, presumed dead since their bodies were never recovered, 3 lakh (mostly pilgrims) stranded for days, of which more than 1 lakh were evacuated by the Army.

The state government took five days just to establish a relief camp near the Dehradun airport and a control room with a public address system. Petty politics between two state Congress leaders, CM Vijay Bahuguna and Union Water Resources minister Harish Rawat, is said to have contributed to the mismanagement.

The flippancy with which Hindu pilgrims were left stranded speaks of the Congress’ extreme apathy, bordering on contempt, for the majority religion. In the current context, Sonia labeling this year’s Kumbh Mela a ‘super-spreader’ without any data to back her claims is just a continuation of her anti-Hindup thought process.

Interestingly, the Congress woke from its slumber the moment the then Gujarat CM Narendra Modi stepped in to evacuate Gujarati pilgrims stuck in Uttarakhand. Of the 5700 that died, less than 1000 were residents of the home state. As usual, Rahul Gandhi was said to be holidaying abroad, and even as lakhs suffered, Sonia fiddled, waiting for him to return before the two ‘flagged-off’ 24 relief trucks and 125 carriers in a choreographed ceremony with much fanfare. Even those trucks ran out of fuel and the relief was stranded enroute.

While genuine criticism of any government is welcome and necessary, most of what we are seeing from mainstream media, Opposition and even some BJP supporters regarding the centre’s handling of the Covid-19 second wave is either sheer propaganda, misreading of the situation or a knee-jerk reaction. It will help everyone to visualize what the situation would be if the Congress were in power.