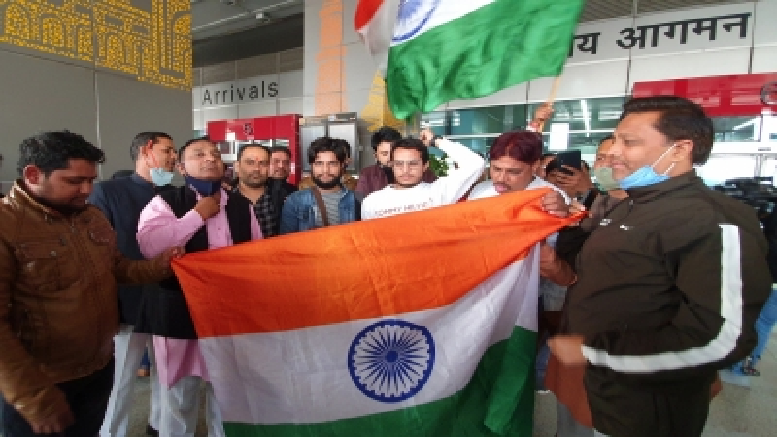 “I am saying on record that the Ministry of External Affairs and diplomats have done a commendable job in evacuating our citizens,” Sharma said.

Soon after External Affairs Minister S. Jaishankar made a statement in the House, Sharma said, “I am proud as an Indian that our country has once again reinforced our reputation for undertaking large scale evacuation operations.”

He said that he also got a distress call from someone who wanted to rescue his ward and he rang up the foreign secretary and within half an hour the student was located. Sharma said he was updated of the student’s well being.

He also said that he wanted to know what was Bharat’s stand at the UN Security Council and also asked the Minister about the efforts being made for effective interventions in ongoing Russia-Ukraine conflict.

Noting that there have also been concern about oil prices and defence supplies being impacted and how the government plans to ensure that there are no disruptions in the supply chain, he asked.

Congress MP and Leader of Opposition in the Rajya Sabha, Mallikarjun Kharge asked, why Bharat was late on issuing advisories, why did our students face danger while the citizens of other countries did not.

He said that the mortal remains of Naveen Sekharappa, who died in cross firing in Kharkiv, Ukraine is yet to be brought back.

While appreciating the efforts of the MEA and the calls that were made by PM Modi to his counterparts in Russia and Ukraine, DMK MP Tiruchi Siva said that the main question is now the future of these students.

Trinamool Congress MP Sushmita Dev said that the government should not use the term evacuation, as students had to walk to the borders through the conflict zone while the MEA officials did not go to the conflict area.

Replying to the questions by the Members, Jaishankar said that students didn’t want to leave in the first place because universities threatened to cancel their degrees.

“I care about the students’ future, whether you do or not,” Jaishankar said.

He also said that the Ukrainian authorities gave the confusing messages and even President Volodymyr Zelenskyy himself said that there was no need to panic.

“Let us also recognise that about 4,000 of them (Indian students) actually returned on their own due to our advisories,” he said.

On the question about the return of Naveen Sekharappa’s mortal remains, the Minister said that the government will ensure his body returns, adding that he would not be sharing details and that every effort was being made.

He also said that Bharat’s focus was primarily on the evacuation of students which is more or less done, “We can now focus fully on diplomacy,” he added.

On the future of evacuated students from Ukraine, he said, “I can assure you that the government will approach this matter with the fullest sense of responsibility.”