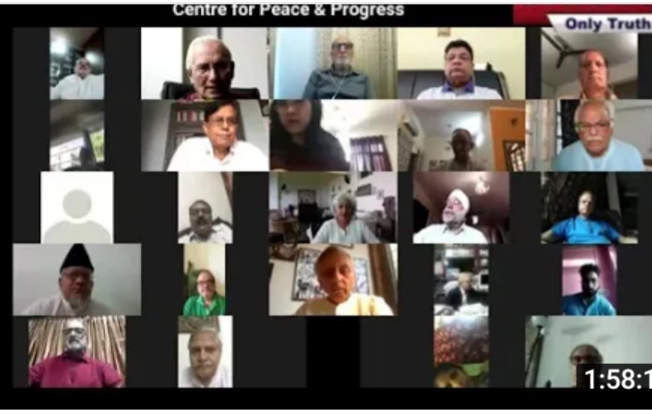 Delimitation process is an opportunity to right the wrongs committed during the last 70 years in Jammu and Kashmir. For several sections of society here, it is like realising their dreams which the earlier dispensations mutiliated with disdain.

Regarding the displaced community of Kashmiri Pandits, it is a clear test of the intent of the Indian state, polity, government and the political parties who day in and day out keep on ranting that ‘Kashmir is incomplete without Kashmiri Pandits’, said Ashwani Kumar Chrungoo, senior BJP and Kashmiri Pandit leader, Incharge: Deptt of Political Affairs and Feedback, J&K-BJP.

He was addressing a webinar held by the Centre for Peace & Progress, New Delhi on the topic: “Another look at the August 2019 constitutional changes in relation to J&K & the role of Judiciary” today. The event was presided over and conducted by O.P. Shah, Chairman of the Centre.

Mani Shanker Aiyar and Muzaffar Shah spoke in favour of reversion of the August 2019 developments regarding the Article 35A and 370. The comparison between the erstwhile separatist movement in Tamil Nadu with the Kashmir scenario by Aiyar was rejected by Kuldeep Khuda, ex-DGP as he said that the insurgency and terrorism in Jammu and Kashmir is a clear violent interference in our domestic affairs by Pakistan.

It is a defacto war against Bharat. While Nyela Khan criticized the parliamentary actions of 2019, Faizan Mustafa said that the BJP government did what was on their agenda regarding Jammu & Kashmir for which they got a huge mandate in the year 2019.

Chrungoo in his presentation candidly said that the abrogation of Article 370/35A is a hard and permanent reality and a composite feature regarding the constitutional developments for the years and decades to come.

It is only the Supreme Court of Bharat that has a right to give its legal opinion on the issue. He maintained that the state status, as has been assured, would be given at an ‘appropriate time’ to the Union Territory of Jammu and Kashmir by the Parliament.

Kashmiri Pandit community, which is living as refugees in its own country for the last more than three decades now has remained unrepresented all along due to gerrymandering of constituencies in the valley. A fervent appeal is made to the Delimitation Commission to exercise its powers to send such a recommendation to the President and the government of Bharat that settles the unsettled issue of politically important concern of the Kashmiri Pandit community.

It will also help in paving way for the resettlement of the community in the valley, eventually, as per their geopolitical aspirations in the days to come.

He further said, “Pudducherry Assembly, which has an arrangement for three nominated seats, in this context, is a guiding and leading example for the Delimitation Commission.”