China’s Road to Doklam – A No Entry Zone 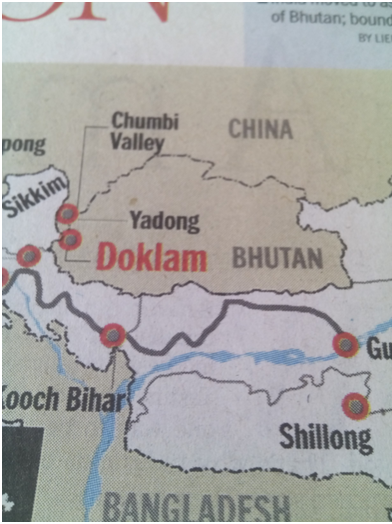 China made wrong calculations in trying to encroach into Doklam assuming Bharat would keep quiet. The point is Bhutan is not prepared to allow Chinese intrusion in Doklam due to strategic and national security reasons. Bharat is also equally determined to resist Chinese intrusion in Doklam since it not only affects its friendly neighbour Bhutan but more importantly  it  brings China’s territory 500 kilometers closer to Bharat’s narrow but extremely vital Siliguri corridor, which connects the North-Eastern region with mainland Bharat. This will have serious security and sovereignty implications for Bharat.

Bhutan does not have formal diplomatic ties with China. Under the 2007 Bharat- Bhutan revised friendship treaty, both the countries have agreed not to allow their territories for activities that are harmful to the national security and interests of the other country. This revised treaty gives greater freedom and independence to Bhutan in its foreign policy and defence matters compared to the earlier treaty between Bharat- Bhutan wherein Bharat was supposed to guide Bhutan in its foreign policy and defence related issues. However, the fact remains that Bharat continues to provide defence and security related guidance and support to Bhutan even after the 2007 treaty has been signed.

Bhutan per se is a peace loving country that values its culture and tradition and it gives more importance to gross national happiness (GNH) index rather than gross domestic product (GDP). One may recall that in 2011 Bhutan introduced a resolution in UN that was unanimously adopted in UN General Assembly calling for the member nations to introduce holistic approach to development by promoting sustainable happiness and wellbeing. Bhutan is well aware of the disturbance of peace in Tibet thanks to Chinese intrusion. Therefore, Bhutan would not like to entertain Chinese interference in its territory and for this Bharat’s support is very vital.

Bhutan which had 47,000 sq.km land area has already been reduced to 38,394 sq.km thanks to Chinese incursion. Chinese intrusions into its small neighbouring countries have been largely successful because those small countries did not have the direct backing of a large nation unlike Bhutan which has had the support and guidance of Bharat in its foreign relations and defence matters as a part of the official treaty till 2007. This is where China has misjudged Bharat’s response to its intrusion into Doklam under the guise of constructing roadway construction.

China’s blocking Bharat’s entry into NSG (Nuclear Suppliers’ Group) and thwarting the moves of Bharat in declaring Jaish-e-Mohammed chief Masood Azhar as a global terrorist by UN has only toughened Bharat’s stand against China on the current Doklam episode.

China’s unilateral claims of sovereignty over the South China Sea to capture 11 billion barrels of untapped oil and 190 trillion cubic feet of natural gas has antagonized countries like Malaysia, Vietnam, Brunei, Taiwan, Indonesia and Philippines.  Vietnam and Philippines have been forced to strengthen their navy by procuring military ships and defence equipment from Japan to counter Chinese aggression in South China Sea. Philippines succeeded in getting a ruling in its favour from the permanent court of arbitration in The Hauge on 12th July, 2016 but China has rejected the tribunal’s ruling.

Under the guise of trade and investment China has lured Sri Lanka into its debt trap. Sri Lanka Ports Authority has agreed to sell 70 percent stake in the Hambantota Port to China Merchants Port Holdings in a $. 1.12 billion agreement as part of which the operations of the port will be handed over to the Chinese firm though the major say in the security matters of the port will be retained by Sri Lanka. Cambodia is next in the line of this debt trap with China followed by Malaysia.

In July, 2017 Vietnam granted a two year extension to oil major ONGC of Bharat for exploring the oil block in South China Sea. On the eve of the annual gathering of the 10 member nations of ASEAN (5th August, 2017) Vietnam urged the rest of the ASEAN member countries to take a strong opposition against Chinese expansionism in South China Sea. In March, 2017 Bharat has conducted joint naval drill operations with Singapore in South China Sea. USA, Bharat and Japan have jointly conducted annual Malabar series of naval drills in Indian Ocean in July, 2017.

The rest of the world sees Bharat as a speed breaker to Chinese aggression in South China Sea and the above joint naval drills with Bharat are meant to give subtle hints to China accordingly.

Bharat has treated the small countries as equal partners in bilateral trade respecting their sovereignty unlike China which has strategically lured the countries that are economically weak into its debt trap in the process compelling them to compromise their sovereignty. CPEC (China Pakistan Economic Corridor) venture funded by China estimated at $ 62 billion is likely to enter rough weather with the current political disturbances in Pakistan where Nawaz Sharif has been compelled to step down as Prime Minister by the court ruling for his alleged money laundering in Panama Papers. In May, 2017 Bharat boycotted China’s meet on OBOR (One Belt One Road) summit on CPEC citing sovereignty, procedural and leadership issues.

The current Doklam standoff between Bharat and China has to be viewed in the above back drop considering the big picture. Bharat has stepped up its defence procurements from global suppliers in general and from Israel in particular to counter the security threats from terrorists sponsored by Pakistan. Bharat has signed historic land boundary agreement with Bangladesh in 2015 and shifted its strategy from look east to act east policy. Therefore, Doklam is part of the act east policy of Bharat and as a result the world is witnessing a shift in Bharat’s stand from being defensive to offensive defence in Doklam which was grossly under estimated by China.

China has two options now in Doklam. Through diplomatic channels wriggle out from Doklam quietly or continue its aggression and be prepared for a war. China may or may not win the war. Even if China wins the war it will certainly lose the battle. Its claims to becoming a super power in the world will be questionable because the world will acknowledge trade supremacy of a country but cannot tolerate the military power supremacy that may jeopardize sovereignty.

Bhutan for that matter may be a small country for China but China must remember even Serbia was a small country but it triggered the First World War. China must also read history once again to understand that trade supremacy and military power combination may not guarantee a nation  permanent super power status and both Britain and USA will vouch for the same.