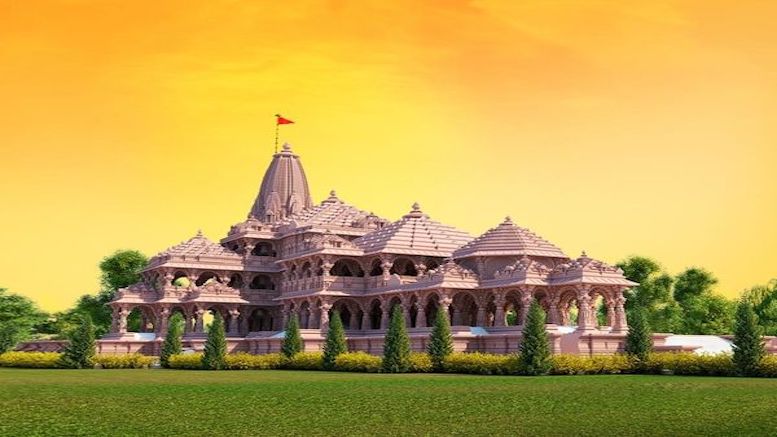 Few can deliver soul stirring discourses on Hindu resurgence and what it means to be a Bharatiya better than the sarsangchalak of the Rashtriya Swayam Sevak Sangh (RSS), Mohan Bhagwat ji. His short speech at the bhumi pujan on August 5 at the Ram Janmbhoomi site in Ayodhya was long on purport. He set us on the road less travelled: mapping the challenges of the post-temple era rather than exult and exuberate over the silent revolution ushered by the force of history.

Now that the cruelly long wait for the bhavya Ram Mandir is finally over, the next few years, he said, should be spent in building the mann mandir (the temple within) typified by Tulsidas’ immortal lines, Siya-Ram maiyn sab jag jaani/Karahun pranaam jori jug paani (I salute with folded hands everything in the entire Creation fully aware that Sita-Ram pervade them all). Few scriptural works, not even the Gita, filter the universality of the Hindu worldview with such emotive simplicity as the Awadhi chaupais of the Ramcharitamanas. They will be read, recited and sung till the end of time leaving the learned and scholarly to peruse Valmiki’s classic in Sanskrit along with the rest of the canon which constitutes Hindu dharma.

What the RSS chief sought to illuminate is the need to discover what the Ram temple represents. Will it be just a brick and mortar structure crying out to be rebuilt 500 years after being felled by Babur’s general, Mir Baqi, or the potent symbol of a civilizational revival aimed at a definitive course-correction of historical wrongs spread over millennia. The ravages wrought by the marauding Mughals and the looting British must not and cannot be forgotten. No less forgivable are the self-inflicted wounds cast by the blundering minority appeasing post-Independence regime of the anti-Hindu Jawaharlal Nehru and his band of pseudo-secular successors.

Ancient texts from Valmiki’s Ramayana to the Skanda Purana to the Vashishta Samhita, accounts of the Chinese traveller Fa Hein in 400 CE right up to the Baburnama, Ain-e-Akhbari, the Carneigi report on Eastern India 1869, and the travelogues of William Finch (1608-11) mention Ayodhya as a holy place of the Hindus. The contents of each were scrutinized by the courts along with the travel writings of the Jesuit missionary, Joseph Tiefenthaler (1740-70), Montgomery Martin’s survey report of 1838, reports of the Archeological Survey of India penned by Alexander Cunningham between 1862-65, and above all, the gazetteers of Lucknow, Barabanki, and Faizabad. They confirm the well-entrenched belief that a mosque stood atop the ruins of a temple. The documents mention the protracted struggle by Hindus to wrest the Ram Janmbhoomi from Muslim occupation right through the reigns of Humayun to Aurangzeb to Wajid Ali Shah. Lakhs of lives, sadhus included, are believed to have been lost.

And yet we were put through the mortification of seeing a deracinated judge named D Y Chandrachud question the validity of the evidence during the hearings of the Supreme Court. He alone lobbed the facile counter whether it was at all possible to ascribe religious sanctity to the alleged ruins of a demolished structure since civilisations had been known to settle and resettle on river banks in the last two millennia and build upon pre-existing structures. Lost on him was the unalloyed faith of millions spread over centuries. It did not cast as much as a shadow on his shallow heart and mind.

The same judge was once also quoted as saying, “While Islam prohibits worship of anything apart from Allah, Hinduism says whatever you worship ultimately reaches the same one power…Hindus can thus worship in a place where namaz is offered.” No judge in any other Asian country with strong cultural underpinnings eg. Japan, Taiwan, South Korea, Singapore, would have had the temerity to say something so patently absurd. And yet, fear of isolation compelled him to attest his signature in the unanimous five-bench decision of the apex court handing over the Ram Janmbhoomi site to Hindus. Chandrachud is the perfect example of a high office holder singularly devoid of national character. Adjudicators like him do not deserve a berth in the highest court of a Hindu nation.

The Babri Masjid could have been razed in the immediate aftermath of Independence just as the Poles demolished the Alexander Nevsky Cathedral, the ugly symbol of an imperial legacy, within a few years of attaining freedom from Russia in 1918, and barely 30 years after its construction was complete. Muslim mollification by the British coupled with the feckless credo of non-violence instilled by Mohandas Gandhi weakened the determination of Hindus to take charge of their own destiny.

Self-confidence (atma-vishwas) and self-sufficiency (atma-nirbharta) cannot be decoupled. You cannot ensure the latter without engendering the former. Hindus expunged from their immediate environs, generations of Macaulay putras enslaved to western values continue to treat their cultural traditions with contempt. Bringing them back to the Bharatiya fold is an uphill task. The damage of decades cannot be repaired in a few years. The message that the Ram temple is only a preparatory step toward the onset of a Hindu Rashtra needs to be hammered into their obtuse craniums.

Hindus need to squeeze out the residue guilt at the happenings of December 6, 1992, without the least remorse lest the sight of a temple in place of the mosque become a permanent blight on their souls. The chance of the special CBI court dispatching those booked in the Babri demolition case to the gallows is razor thin. History shows that it is only unsuccessful revolutionaries who are branded criminals. The storming of the Bastille in Paris on 14 July 1789 signaled the beginning of the French Revolution. None was apprehended in the incident in which around 98 people were done to death by a thousand civilian insurgents aided by 60 French mutineer guards killed. Bastille was a political prison and armory. It was raided not because the invaders wanted to free its inmates (only seven were then imprisoned), but because it symbolized the monarchy’s abuse of power.

A revolution, said the Spanish philosopher, Jose Ortega y Gasset (1883-1955) is not an uprising against pre-existing order, but the setting up of an order contradictory to the traditional one. That, essentially, is what the temple will epitomize if the forces it threatens to unleash are taken to their logical conclusion. Prime minister Narendra Modi was not entirely wrong in saying that the struggle to build the Ram Mandir was no less significant than the freedom struggle.

In his excellent edit page piece in HT, Delhi University assistant professor Abhinav Prakash Singh likened the rebirth of the Ram Mandir to the twilight of the First Republic, the final nail in the coffin of Nehruvian socialism. A Constitution whose defining principles are Anglo-Saxon cannot be allowed to override the country’s dharmic values ingested over thousands of years. Genuflecting before a man-made document makes a travesty of our timeless wisdom. The separation of church and state is a western concept which cannot hold good in a country where dharma has an integral role in every aspect of our lives.

Communists and Leftists dictated our education policy. The first five education ministers were Muslim, the first of whom was a Mecca born, madarsa-bred maulana. Self-loathing Hindus saw no injustice in it. Again, the soul-stirring song of our freedom struggle, Vande Mataram, was the natural choice for national anthem. Nehru had its claims vetoed because some lines affected Muslim sensibilities. Adopted instead was an anthem penned by Tagore which cannot hold a candle before Bankim’s lyrics. The Nobel winning poet-painter-musician Tagore was a rare genius, but not a nationalist by his own volition. Which is understandable given the European influences during his formative years.

Whether posterity regards the Ram temple a tipping point in Hindu revival will depend on the tenacity of the BJP/RSS to traverse the mines placed on the way before the 2024 Lok Sabha poll. The temple crusade had perceptibly weakened after the Babri was reduced to rubble. Circumstantial factors caused by the political blowback were partly responsible for the loss in interest. Even L K Advani, seen by most as the principal architect of the Ram Janmbhoomi movement, never came into his own. The mandir campaign for the most part was charioted by the Vishwa Hindu Parishad (VHP) and its iron fisted president, Ashok Singhal. The Dharma Sansad was specifically convened in 1984 at his behest to flag the mandir issue. Advani jumped into combat when he sensed the issue could be politically exploited due to rising opposition from secular parties. Admittedly, his involvement strengthened the VHP’s hands which in turn led to the BJP’s ascent as a political force.

Ironically, Advani committed political hara kiri the very day the mosque fell by publicly regretting the event as the “saddest day of my life”. Fifteen years later he earned further displeasure after he called Jinnah “great” during a visit to Karachi, his birthplace. The Ram Mandir did not as much as figure on the agenda of the BJP’s foremost peacenik, Atal Bihari Vajpayee, during the tenure of NDA-1. Even Modi took no pains to push the temple agenda post 2014 though he was among the charioteers of Advani’s rath in 1990. His interest was only slightly more than ABV’s. Ideally, he should have visited Ayodhya once in the last six years to keep the iron hot. Two cheers, thus, is all the BJP deserves. Much credit goes to two upright chief justices of the Supreme Court, Dipak Misra and Ranjan Gogoi.

Modi’s overall popularity remains unaffected despite the double whammy of the economic downslide made worse by a worldwide pandemic, and the Chinese incursions in Ladakh. Many are the pitfalls, the biggest of which is his own desire to live down his image of a Hindu nationalist in the eyes of the West. The rightist Hindu historian Sita Ram Goel warned against the tendency.

In his monograph titled “Defence of Hindu society” he refers to the Hindu penchant for picking on the third quarter (carana) of the Rig Vedic verse 1.164.46 – ekam sat viprah bahudha vadanti (it is of one existence that the wise speak in different ways) while ignoring the first two lines of the mantra:

A rough and ready translation of the whole mantra reads: “They hail him as Indra, as Mitra, as Varuna, as Agni, also as that divine and noble winged Garutman. It is of One existence that the wise speak in diverse ways, whether as Agni, or as Yama, or as Matarisvanam”.

By quoting the third line alone, writes Goel, Hindus want to stake claim for admission to the exclusive club of monotheism maintained by Christianity and Islam. Hindus want to convince the monopolists of monotheism that the earliest Hindu shastra, the Rig Veda, also supports and sanctions what is supposed to be the summum bonum of Christian and Muslim theology. And that they should not be appalled by the multiplicity of gods in the post-Vedic pantheon.